Steel Mill was an English hard-rock/psych band that released the album Green Eyed God on Penny Farthing in 1972.

Challenger was raised in a musical family and imbibed with classical, jazz, folk, and R&B at an early age. In 1964 while studying in the sixth form, he joined trad folksters the Garret Singers. They hosted the namesake Garret Club in Tooting, a breeding ground for up-and-comers Ralph McTell, Tim Hart, and Maddy Prior. Their lone album, The Garret Singers, appeared posthumously in 1970 on Decca folk subsidiary Argo.

Morris and Williams played in The Roadrunners, an instrumental R&B combo based in Streatham that never made it to record (not to be confused with the earlier Liverpudlian beat act The Roadrunners). Their primary influences were Sonny Boy Williamson, Howlin’ Wolf, and Lee Dorsey.

In early 1969, Challenger and Morris formed a musical partnership, having both left their prior bands and warmed to each other’s influences. They rehearsed under the name Steel Mill at Dave’s house and roped in his ex-bandmate, Williams, who informed them of a local power trio that featured their ex-classmate, Chandler. The bassist and his bandmate, drummer Colin Short, agreed to join the new band.

Steel Mill rehearsed in a room above the Nags Head pub in Battersea (also used by Fleetwood Mac) and braved treacherous routes from gig to gig. They played one of their early show’s at London’s Nashville as the opening act for Taste, whose audience exceeded the club’s capacity. After the Irish trio’s breakup, Steel Mill performed Taste’s 1970 song “If I Don’t Sing I’ll Cry” as a tribute.

Another notable event occurred at Imperial College, where they shared a triple-bill with Tyrannosaurus Rex and Ray Russell. The night ended with a blues jam between Steel Mill and Russell’s group.

Before Steel Mill entered the studio, Short left the band. His slot was temporarily filled by drummer Ricky, an eccentric who went by the name Rupert (after Rupert Bear, causing rumors that this was Clem Cattini of Rumplestiltskin). Chris “The Rat” Martin took over as their steady drummer in late 1970. 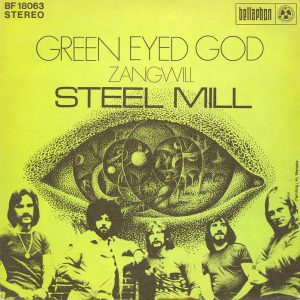 Once out, “Green Eyed God” reached #51 on the UK singles chart. Steel Mill plugged the song with a performance on the Radio Luxembourg River Boat before a mix of celebrities and luxury cruise winners. (Marmalade and Tony McPhee of the Groundhogs were also aboard that day.)

The song was popular in Europe, where it reached #17 in Germany. Before Steel Mill reentered the studio to finish their album, Chandler cleared out for bassist Jeff Watts. 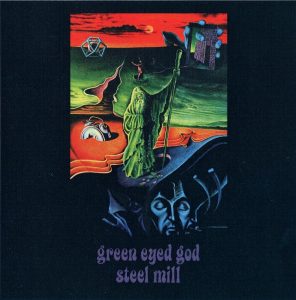 Steel Mill released their singular album, Green Eyed God, in 1972 in Germany on Penny Farthing/Bellaphon. It features eight Challenger/Morris originals: three short numbers (“Summers Child,” “Treadmill,” “Turn the Page Over”), three lengthier cuts (“Blood Runs Deep,” “Mijo and the Laying of the Witch,” “Black Jewel of the Forest”), and the postlude “Har Fleur.” The title-track is a nine-minute version of the earlier single.

Concurrent to his work on Green Eyed God, Schroeder arranged Polydor’s Vibrations Series: a collection of instrumental pop/classical albums. One of those, Love Vibrations, is sometimes credited to Rick Wakeman because of his heavy involvement (immediately pre-Yes). Schroeder also produced 1971/72 albums by Cymande, Trifle, and Gnidrolog.

Green Eyed God is housed in a single sleeve with a black-framed surrealist cover painting. It shows Moses (center) before a parted green sea-like formation under a dark orange sky. The setting is flanked with Daliesque objects: a floating polyhedron; a broken, half-submerged clock; a photo of a castle entrance, held by giant blue fingers. The blueish man below (eyes closed) appears to be dreaming it all. 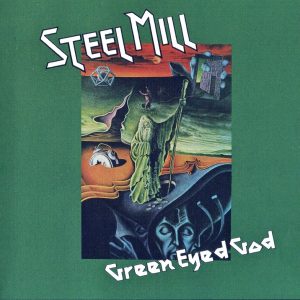 The Green Eyed God cover image was painted by German artist Helmut Wenske, who also illustrated covers for Bellaphon titles by Orange Peel, Jeronimo, Recreation, Nektar (A Tab in the Ocean, …Sounds Like This), and Nine Days Wonder (We Never Lost Control). His work for Steel Mill bears some resemblance to his covers for Dzyan and Pell Mell (Marburg).

Bellaphon issued “Summers Child” as a single, backed with the non-album Challenger/Morris original “Get On the Line.” Penny Farthing reversed the sides for the UK market, where Green Eyed God finally appeared in 1975 with an altered cover (green frame, slanted white fonts).

Soon after the album’s release, Williams and Watts left over creative differences. Steel Mill continued for a final round of UK dates with guitarist Alan Plaice and bassist Danny Easterbrook. Despite their popularity in Germany, they booked no shows in that country.

On May 11, 1972, Steel Mill opened for David Bowie at the Worthing Assembly Hall. (The singer was at the start of his Ziggy Stardust phase, backed by the Spiders from Mars.) One of their last documented shows was at the Horn Hotel, Braintree, on August 11 as part of a double-bill with Fusion Orchestra.

Watts joined Ray Russell in Mouse, which issued Lady Killer on Sovereign in 1973. He later surfaced in pop-rockers Design.

In 2011, post-psych specialists Rise Above Relics issued Jewels of the Forest (Green Eyed God Plus), a complete set of Steel Mill recordings on two LPs, including Green Eyed God, the non-album 7″ sides, and the 1970 demos.