Steamhammer was an English blues-rock band that released the 1969/70 albums Steamhammer (aka Reflection), MK II, and Mountains. Guitarist Martin Pugh assembled a new lineup for the 1972 release Speech on the German Brain label, featuring original Renaissance members Keith Relf and Louis Cennamo, who regrouped with Pugh in the 1975 A&M one-off Armageddon. 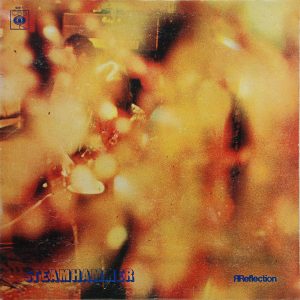 The 11-track album contains nine originals, including five co-written by White and Quittenton: “Lost You Too,” “She Is the Fire,” “Even the Clock,” “Down the Highway,” and “When All Your Friends Are Gone.” Pugh and Quittenton collaborated on “Junior’s Wailing” and the two-part miniature “Water,” which bookends the album. White lone-wrote “On Your Road.” The album also includes covers of BB King (“You’ll Never Know”) and Eddie Boyd (“24. Hours”). 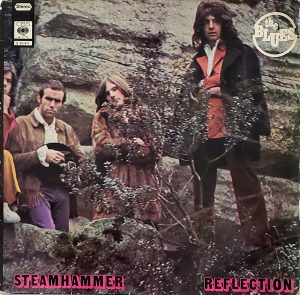 Steamhammer sports multiple covers. Original UK CBS copies are housed in a gatefold sleeve that shows the band performing in a small setting, obscured by blurred, closeup yellow-gold overhang. Through technically titled Steamhammer, the word “ЯReflection” appears on the lower-right. The inner-spread shows the band outdoors along a shrub-laden rocky precipice. The outdoor image became the front and back on most (single sleeve) pressings as Reflection. Original North American copies employ 3-D, saturated effects to the outdoor image and sport larger fonts.

In 1970, the album was reissued in Germany (the only market with a CBS pressing titled Reflection) on Bellaphon as Steamhammer. This version sports a green-tinted rustic cover against a white background with the band grouped around leafless tree branches. 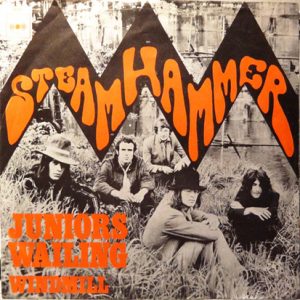 That summer, Pugh and Quittenton partook in sessions for An Old Raincoat Won’t Ever Let You Down, the debut solo album by Rod Stewart. Quittenton exited Steamhammer for a spot in Stewart’s backing band. Meanwhile, Rushton cleared out for Mick Bradley, who drummed on the 1969 Elektra release Matthew, Mark, Luke and John by Methuselah, a precursor to Amazing Blondel.

As sessions commenced for their second album, Steamhammer added reedist/keyboardist Steve Jolliffe, who’d played in The Joint with a pre-Supertramp Rick Davies and was briefly involved with an embryonic Tangerine Dream. The new lineup’s first release was the non-album single “Autumn Song,” a White/Jolliffe composition backed with the group-written “Blues for Passing People.” “Autumn Song” made the upper-reaches of the French singles chart. 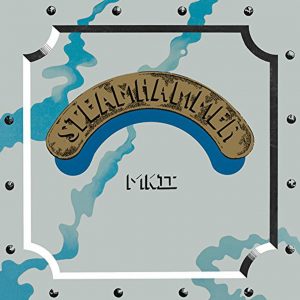 In November 1969, Steamhammer released MK II on CBS (UK, Europe, South Africa). White co-wrote the six-minute album opener “Supposed to Be Free” and co-wrote “6/8 for Amiran” with Jolliffe, who contributed “Johnny Carl Morton” and “Turn Around.” One track, “Contemporary Chick Con Song,” is a group-written number.

Side two consists of four White compositions: “Passing Through,” “Fran and Dee Take a Ride,” the miniature “Down Along the Grove,” and the 16-minute “Another Travelling Tune,” the last of those co-written with Pugh, who lone-wrote “Sunset Chase.” Jolliffe plays harpsichord, flute, and alto/tenor saxophone.

CBS copies are housed in a single sleeve with an illustration of a riveted steel panel that reflects a cloudy sky. The word “Reflection” appears on the lower-right, noting the label’s short-lived Reflection series (Catherine Howe, Andwella, Orange Peel). Confusion over this might explain why Epic titled Steamhammer’s first album Reflection. The back of MK II has photos of each member amid the white silhouette of a vintage air compressor. Folk singer Graham Davies wrote the liner notes.

In North America, where Steamhammer was titled Reflection, MKII was issued on Epic as Steamhammer with the image of a vintage steamhammer against a dotted background. This version has liner notes by John Gabree of High Fidelity magazine. 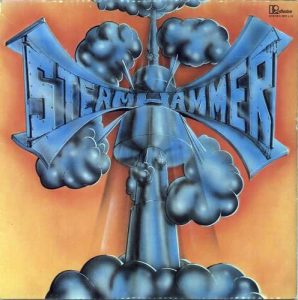 In 1971, CBS reissued MKII on its Reflection imprint, this time as Steamhammer II with a new cover by Optima Design. It shows the steel-panel nameplate squeezed from a blue tower that emits smoke clouds against an orange sky. The back shows the credits in word bubbles amid the circuitry. This design and title was also used for the 1971 German pressing on Bellaphon.

Months after the MKII sessions wrapped, Jolliffe quit Steamhammer, which recorded its third album as a four-piece. 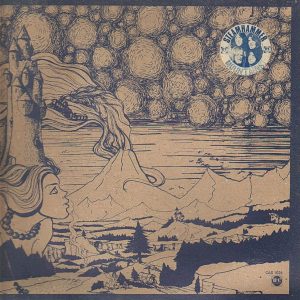 Steamhammer’s third album, Mountains, appeared in November 1970 on B & C Records, a recently established indie for album-oriented post-psych (Atomic Rooster, Delivery, Ginhouse, Hannibal, Shelagh McDonald). The albums starts with the White/Pugh co-write “I Wouldn’t Have Thought (Gophers Song)” and wraps with the group-written “Hold That Train.” A 10-minute interpretation of the 1947 Lionel Hampton piece “Riding On the L&N” is the centerpiece of side two. White sole-composed the remaining cuts: “Levinia,” “Henry Lane,” “Walking Down the Road,” “Leader of the Ring,” and the title track. 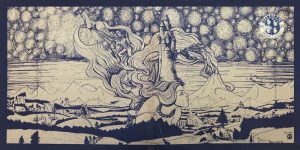 Mountains was their first album with the same title and cover art in each territory. The gatefold cover, designed by one Chris Stepan, depicts a giant beauty with a castle hat and long-flowing hair. The two-tone (navy, sand) image shows her rise from a valley with contracted distances (mountains into sea) under a baubled sky. A wheel-enclosed group shot appears in the upper-right. The inner-spread shows a flipped photo-negative of the setting with the castle grounded and depictions of the band in lieu of the beauty.

Mountains also appeared in Germany (Metronome) and Fontana (France). In the Netherlands, it appeared on Pink Elephant (Shocking Blue, Serpentine), the “pop”-oriented branch of the four “Elephant” imprints of Duraco. This version substitutes pink for navy on the album art.

In early 1971, Steamhammer lost their only original member (Davy) and their principle writer (White). Pugh and Bradley hired bassist Louis Cennamo, fresh from one-album stints with Renaissance and Colosseum. The trio commenced work on a new Steamhammer album with guest vocalist Garth Watt-Roy, recently of The Greatest Show On Earth and Fuzzy Duck.

Steamhammer recorded their fourth album in late 1971. Tragedy struck during the mixing stage when Bradley died suddenly of undiagnosed leukemia in February 1972. The band held a memorial concert at London’s Marquee Club with performances by Atomic Rooster, Beggars Opera, If, and Gringo. 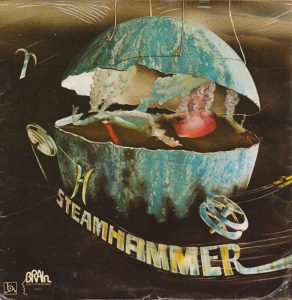 The finished album, Speech, appeared in early 1972 in Germany only on Brain, a newly-established Metronome sublabel for post-psych “Kraut rock” acts (Gomorrha, Guru Guru, Grobschnitt, Thirsty Moon). Side one consists of the five-part “Penumbra” (22:34) with lyrics by one Elizabeth Romilly. The second side contains two long tracks, “Telegram (Nature’s Mischief)” (lyrics by Karl Williams) and “For Against.” The music is group-credited to the trio lineup, which produced the album with assistance and backing vocals from (ex-Yardbird) Keith Relf, Cennamo’s colleague in the original Renaissance.

Speech is housed in a vertical gatefold cover designed by Paul Whitehead, best known for his 1970–72 covers for Genesis (Trespass, Nursery Cryme, Foxtrot), Peter Hammill (Fool’s Mate), and Van der Graaf Generator (H to He, Who Am the Only One, Pawn Hearts). It shows a cracked Earth, flanked with random objects and held suspended by wire from god’s hand amid dark clouds and flying saucers. The inner-spread shows a medium group shot of the bearded trio in post-hippie attire. The sidebar states “Dedicated to Martin Bradley.”

In 1973, Speech appeared in France on the BASF label. A second German pressing on Metronome (1975) bears the title This Is Steamhammer and sports a black/grey cover with a circular, swoosh-lettered nameplate. Brain also paired Speech with Mountains on the 1974 double-LP This Is… Steamhammer, housed in a gatefold with ripped, blue derby rollers racing lap-to-lap.

Pugh and Cennamo carried on with drummer John Lingwood and singer Ian Ellis, formerly of the Scottish trio Clouds. This Steamhammer did a spring 1972 tour of England and Europe. They continued for another year with singer/guitarist Bruce Michael Paine. In June 1973, they changed their name to Axis. Quittenton rejoined at this stage, just months before their final split in late 1973.

In 1974, Relf summoned Pugh and Cennamo to Los Angeles for a new band, Armageddon. Amid some media buzz, they hired ex-Captain Beyond drummer Bobby Caldwell and signed to A&M. Their self-titled album appeared in 1975. The opening track, “Buzzard,” lifts its stinging main riff from the “Battlements” section of “Penumbra.”

Cennamo and Relf returned to England in 1976 to reform the original Renaissance that recorded the namesake 1969 album. With that name now owned by another group of musicians (Turn of the Cards, Scheherazade and Other Stories), the original group named itself Illusion after the 1971 second Renaissance album (recorded by multiple lineups). Before Relf could participate, he was fatally electrocuted that May.

Quittenton played on each Rod Stewart album up through 1974 and co-wrote the hits “Maggie May,” “You Wear It Well,” and “Farewell.” Despite his role in Stewart’s solo backing band, he declined an invitation to join Faces. After his stint with Axis, he formed an instrumental band with Lingwood, Pete Sears, and Jeff Beck/Hummingbird keyboardist Max Middleton, but this never advanced beyond rehearsals.

White released one solo album, Open Door, in 1975 on Gull. He later moved to Oregon and worked as a truck driver until his passing from cancer in 1995.

Jolliffe scored the 1973 documentary Tattoo by Scottish filmmaker John Samson. He rejoined Tangerine Dream for their 1978 release Cyclone. In 1981, he released the album Earth on the library label Bruton Music. A collaboration with Tony Duhig (Jade Warrior) produced the 1983 ambient album Journeys Out of the Body, Jolliffe’s first of two releases on Nada Pulse.

Lingwood played on 1976–80 albums by Alan Sorrenti, Arthur Brown, Dave Greenslade, and Mandy Morton. He joined Manfred Mann Earth Band for their 1980 release Chance and remained until their first breakup in 1987.

New York City
New York City were an American soul group from NYC. Members: John Brown, Claude Johnson, Tim McQ...
Marc Almond
Marc Almond (born July 9, 1957) is an English vocalist, songwriter, and arranger from Southport, M...
The Purple Gang
The Purple Gang were an English pop-psych band from Stockport that released the much-comped toy-t...
The Loading Zone
The Loading Zone was an American brass-rock-soul band that released a self-titled album on RCA Victo...
Eye to Eye
Eye to Eye were an English/American duo that released two albums during the early 1980s. The brainch...