Spring was an English symphonic-rock band that released a self-titled album on RCA/Neon in 1971. It has since become a collectible alongside contemporary titles by Cressida, Fields, Gracious, and Raw Material.

Spring assembled in Leicester when singer Pat Moran and guitarist Ray Martinez teamed with bassist Adrian Maloney, drummer Pick Withers, and keyboardist Kips Brown. None of them had prior recording credits apart from Withers, formerly of Rome-based English beatsters The Primitives. As Spring, they gigged around Britain at the dawn of the 1970s.

After a van breakdown in Wales, Spring had a chance encounter with Rockfield Studios founder Kingsley Ward, who was impressed by the band’s material. They signed with RCA’s Neon imprint, the home of numerous post-psych outfits, including Dando Shaft, Indian Summer, Tonton Macoute, Quintessence, Shape of the Rain, and Running Man. 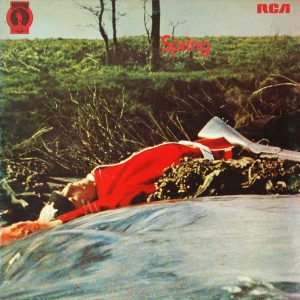 Spring appeared in 1971 on Neon. It features eight group-written originals, including “The Prisoner (Eight by Ten),” “Grail,” “Inside Out,” “Grazing,” and “Shipwrecked Soldier.”

Original copies are housed in a triple-gatefold cover that shows a slain soldier bleeding into a lake. The image was conceived, designed, and photographed by Keith MacMillan (aka Keef), also responsible for visuals on albums by Hannibal, Black Sabbath, Warhorse, Affinity, Beggars Opera, and Colosseum.

Spring toured the album into the following year on double-bills with Keith Christmas, the Sutherland Brothers, and The Velvet Underground. During sessions for a second album, Spring disbanded in early 1972.

Withers played on albums by assorted folk acts (Michael Chapman, Ian A. Anderson, Prelude, Shortwaveband, Bert Jansch) and served as the drummer of Dire Straits from 1977 to 1982, appearing on their first four albums.

Martinez did session work (Gypsy, Alkatraz) and lengthy stints in Airwaves and Showaddywaddy. In 1976, he cut a lone 7″ — “Ray of Sunshine” (b/w “A Lot of Love”) — on United Artists.

Spring was reissued in 1992 by archivist Laser’s Edge with three bonus tracks: a leftover from the 1970/71 sessions (“Fools Gold”) and two songs from the aborted 1972 sessions (“Hendre Mews” and “A World Full of Whispers”). It has since received more than 20 pressings on Repertoire, Eclipse, ADA Sound, Akarma, and other specialty labels. Further recordings were salvaged in 2007 for the Second Harvest release The Untitled 2.