Spirogyra was an English folk-rock band that released the album St. Radigunds on B & C Records in 1971, followed by Old Boot Wine on PEG in 1972. The band’s third and final album of the period, Bells, Boots and Shambles, appeared on Polydor in 1973.

Singer Barbara Gaskin joined The Northettes, the backing singers of Hatfield and the North and National Health. She and Hatfield keyboardist Dave Stewart scored hits as a synthpop duo.

Spirogyra evolved from a musical partnership between Martin Cockerham and Mark Francis, two singing guitarists from Bolton, Lancashire. They teamed in the summer of 1967 and performed locally until 1969 when Cockerham enrolled at the University of Kent in Canterbury.

In December 1969, Cockerham assembled more than 10 UoK musicians for a series of jam sessions. Eventually, the group pared down to the quartet of Cockerham, bassist Steve Borrill, violinist Julian Cusack, and singer Barbara Gaskin. They named their act after the genus Spirogyra, a free-floating green algae.

Max Hole, the Student Union Entertainment Secretary, took Spirogyra under his managerial wing and booked them at universities nationwide. They cut at least 13 demos at Keynes College between May 1970 and January 1971, including “Mackerels and Fishes,” “Defender of the Faith,” and “Counting the Cars.”

Spirogyra gigged throughout England and the Netherlands and played on bills with Traffic and Patto. Despite Hole’s efforts to secure deals with Apple (domestic) and Polydor (abroad), they signed to B & C, a short-lived underground label with ties to Charisma. 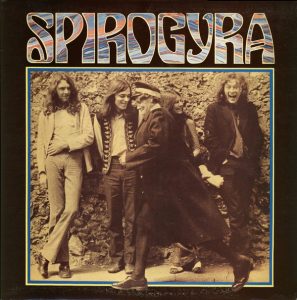 Spirogyra released their debut album, St. Radigunds, in September 1971 on B & C (UK) and Polydor (Germany, NZ). It features 10 Cockerham originals, including “The Future Won’t Be Long,” “Time Will Tell,” “Captain’s Log,” and the lengthier tracks “Magical Mary,” “Cogwheels, Crutches and Cyanide,” and “The Duke of Beaufoot.”

St. Radigunds sports a sepia-tinged image of the band cavorting against a rocky backdrop with a patrol woman crossing the scene. The Spirogyra logo (psychedelic nouveau font) is rendered in marble. Designer Pete Rhodes did this and the next two covers.

“Captain’s Log” appears on Clogs, a 1972 folk-rock compilation with cuts by Andy Roberts, Steeleye Span, and Keith Christmas. It was issued on PEG, an alias for Pegasus, the label that swallowed B & C and all of its acts that year.

As Spirogyra prepared a followup, Francis joined the band on guitar and keyboards. Cusack reduced his role to side-player status. 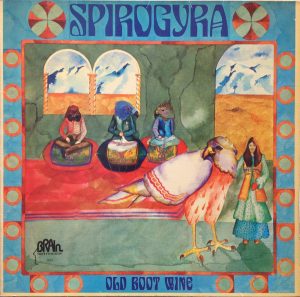 Hole produced the album with engineer Robin Black, whose technical credits include 1970–72 albums by Edwards Hand, Red Dirt, Donovan, Stone the Crows, Wild Turkey, the Keef Hartley Band, Supertramp (Supertramp), Jethro Tull (Benefit), Egg (The Polite Force), T2 (It’ll All Work Out In Boomland), Pink Floyd (Meddle), and Gerry Rafferty (Can I Have My Money Back?).

The textured cover has a watercolor painting by Rhodes. It depicts four people (representing the band) inside a temple. The male members are seated Indian style with bird masks. Gaskin stands foreground with a giant bird.

“Dangerous Dave” was lifted as a single (b/w “Captain’s Log”). 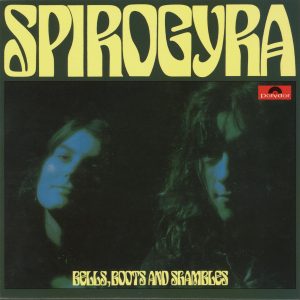 Spirogyra moved to Polydor (UK) for their third and final album of the period, Bells, Boots and Shambles, released in April 1973. Side one contains four numbers, including “The Furthest Point,” “Parallel Lines Never Separate,” and a song called “Old Boot Wine.” Side two consists of “An Everyday Consumption Song,” “The Sergant Says,” and the 13-minute four-part epic “In the Western World.” Cockerham composed the entire album.

Despite the presence of Borrill and Cusack, only Cockerham and Gaskin (now a couple) are pictured on the cover. Additional players include jazz saxophonist Stan Sulzman (on flute), cellist John Boyce, trumpeter Henry Lowther, and folk musician Steve Ashley (whistle). String and wind arrangements are credited to folkie Dolly Collins (“The Furthest Point,” “Old Boot Wine”) and Cusack (the rest).

Like its predecessor, Bells, Boots and Shambles was produced by Hole and engineered by Black. A leftover from the sessions, “I Hear You’re Going Somewhere (Joe Really),” was issued on a Polydor 7″ (b/w “Old Boot Wine“).

A new Spirogyra lineup comprised of Cockerham, Gaskin, Biddulph (bass), and Jon Gifford (woodwinds) toured till the spring of 1974. While they didn’t make it to the studio, the lineup was captured live on multiple occasions. A new live favorite from this period was “Sea Song (A Folk Rock Opera),” included on the later archival release Swan Songs 69–74.

Gaskin became one-third of The Northettes, which sang backup on 1974/75 albums by Egg and Hatfield and the North. After further appearances on albums by Bruford and National Health, she formed a synthpop duo with the common link of those bands, keyboardist David Lloyd Stewart. In 1981, they scored a UK #1 hit with a cover of the Leslie Gore classic “It’s My Party.”

Cockerham resurfaced in 1992 with the CD Sacred Valley on self-press Rainbow Empire. He and Francis reformed Spirogyra in the mid-2000s for the CDs Children’s Earth and Spirogyra 5.

Hole worked his way up the corporate ladder and in 2013 became chairman and CEO of UMGI (International division of Universal Music Group).

Since 1999, all three Spirogyra albums have been reissued on CD. They were also compiled on the 2005 Castle Music double-disc A Canterbury Tale. Their Keynes College demos, plus further outtakes, appear on the 2000 Repertoire release Burn the Bridges (The Demo Tapes 1970 – 1971).

Forever Amber
Forever Amber were an English pop-psych band from Cambridge that self-released the album The Love ...
The Norman Haines Band
The Norman Haines Band were an English psych-rock band from Birmingham, led by the namesake keyboa...
Charles Earland
Charles Earland (May 24, 1941 — Dec. 11, 1999) was an American soul-jazz/funk organist from Philad...
Pocket-Size
Pocket-Size were a Danish psych-rock band that recorded an album's worth of material circa 1970. ...
Buzzy Linhart
Buzzy Linhart (March 3, 1943 — Feb. 13, 2020) was an American musician and songwriter who released f...