Slack Alice was an English barroom-rock band, led by veteran singer Alice Spring. In 1974, they issued a self-titled album on Philips. Keyboardist John Cook moved on to Kestrel and Midnight Flyer. Spring and bassist Mike Howard reconfigured in new wavers Darling for a 1979 album on Charisma.

Spring was born Sandra Alfred in Marylebone, London, in 1943. She first entered showbiz as a tween actress in the mid-1950s. In 1957, she cut the Oriole single “Rocket and Roll” (b/w “Six Day Rock”), an early example of UK rock ‘n’ roll that predates the arrival of Cliff Richard and Billy Fury. From age 15 to 20, she appeared in numerous film and television productions, including The Little Beggars; So Evil, So Young; She Always Gets Their Man; and The Human Jungle.

Alfred adopted her first alias, Mandy Mason, for the 1963 Parlophone single “A Tear In My Eye” (b/w “A Sweet Love”), produced by Barry Mason. In 1964, she changed her name to Sandra Barry for a trio of Pye singles:

Backed by beatsters The Boys, she issued the 1964 Decca single “Really Gonna Shake” (b/w “When We Get Married”). The Boys soon morphed into The Action. Her other backing band, the unsung Jet Blacks, included a young John Paul Jones.

After nearly a decade out of the spotlight, she returned with a new stagename, Alice Spring, the namesake for a new band with her bassist husband Mike Howard and two seasoned journeymen: guitarist Peter Finberg and keyboardist John Cook.

Finberg played in a 1972 touring lineup of Renaissance between the albums Prologue and Ashes Are Burning.

Cook hailed from psych-rockers The Mixed Bag, which cut three 1969 Decca sides plus a fourth (“Potiphar”) with the Ramases III Orchestra, directed by Andrew Lloyd-Webber for his 1968 musical comedy Joseph and the Amazing Technicolor Dreamcoat. In 1971, he played on the post-psych Penny Farthing release Restless Night by Octopus, an outgrowth of The Cortinas with the future rhythm section of Split Enz.

(The term “slack Alice” is a colloquial north English country slang for “slovenly woman.” It has also been used to denote a promiscuous woman or prostitute. In the 1974 song “Slack Alice” by Australian rockers Madder Lake, the character’s legend is retold by her pimp, an apparent frontiersman.) 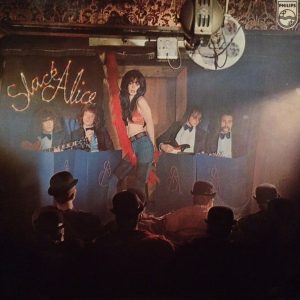 Slack Alice appeared in 1974 on Philips in the UK, Europe, Canada, and South America. It features eight numbers primarily composed by Finberg, who lone-wrote the final three tracks: “Southsea Island Girl,” “Motorcycle Dream,” and “Na-Me-Nihcam (Soldier of the World).” He also co-wrote a song apiece with Spring (“Slack Alice“) and Howard (“Mr. Sharpshooter“) and collaborated with both on “Put Me on the Railroad.”

One Eugene Jockel pitched in on the Finberg/Spring “Mamas Gonna Boogie.” The track “Gravelstone Cottage” is a co-write between Finberg and Renaissance percussionist Terence Sullivan, perhaps dating from their overlapping months in that band. The LP labels credit Spring by her earlier stagename, Sandra Barry.

The cover shows Spring straddling a red boa on a saloon stage while her tuxedo-clad bandmates perform seated behind folded partitions. In Peru, the album appeared as Motorcycle Dream with the name and title added as a yellow bar sign (flared serif font) on the upper left.

When issued as a single, “Motorcycle Dream” charted in the Netherlands, where Slack Alice mimed the song on the music program TopPop. The single was backed with the non-album Finberg original “Riding the Wind.” The tracks “Put Me on the Railroad” and “Mr. Sharpshooter” were also paired on a Philips single.

“Motorcycle Dream” appears on the 1975 Danish Philips comp Boomers with tracks by Black Sabbath, Nazareth, Status Quo, Barry White, and Love Unlimited. “Put Me on the Railroad” appears on the Dutch Philips comp 20 Super Hits with the aforementioned acts, plus tracks by Ekseption, Velvet Glove, the Spencer Davis Group, and Dusty Springfield.

Slack Alice gigged the London club and pub circuit throughout 1974/75 and into 1976. Little is documented by 1977, though they made a surprise appearance on August 6 of that year at the Roxy Club, the epicenter of punk in Covent Garden. They shared the bill with guitarist Bernie Torme, who later played with Gillan, Ozzy Osbourne, and Atomic Rooster.

Spring and Howard formed Darling, a new wave rock band with drummer Paul Varley (Little Free Rock, Arrows) and American guitarist Hal Lindes (later of Dire Straits). In 1979, they released the album Put It Down to Experience on Charisma, accompanied by the provocative single “Lookin’ Kinda Rock ‘n’ Rolled.” They opened for Frankie Miller around the time he charted with a song called “Darlin’.” That same year, Spring sang backing vocals (along with Jane Kennaway) on the single “Hang On” by Nigerian singer Nana Love.

Howard surfaced once more (as Stirling) on the 1981 single “USA” (b/w “Lonely Road”) by NWOBHM act Skitzofrenik. In 1983, he produced the synthpop single “Gone to China” by Sandglow Marinas. Between 1984 and 1987, he and Spring co-produced albums by National Pastime and Monro.