Skip Bifferty was an English pop-psych band from Newcastle that released three singles on RCA, culminating with a popular 1968 self-titled album. They moonlighted as Heavy Jelly for the 1969 Island single “I Keep Singing That Same Old Song,” a record-breaker for longest a-side. Select members also recorded with Every Which Way, ARC, and Glencoe.

Skip Bifferty had its roots in The Chosen Few, a Tyneside beat group formed in late 1962 by keyboardist Micky Gallagher and drummer Tommy Jackman with guitarist and singer Alan Hull.

Gallagher and Jackman teamed earlier in a group called The Unknowns. They first met Hull in their next act, The Crestas, which filtered through a sequence of names (The Wrekendykes, The Hi-Fives, The Clique).

As The Chosen Few, they won a Radio Luxembourg contest and landed a deal with Pye that generated the 1965 singles “I Won’t Be Around You Anymore” (b/w “Big City”) and “Today, Tonight and Tomorrow” (b/w “So Much to Look Forward To”). All four sides were written by Hull, who departed for the northeast folk circuit and later emerged as the mastermind of Lindisfarne.

Gallagher briefly sat in with The Animals after the departure of their keyboardist, Alan Price. In mid-1966, Gallagher and Jackman kick-started The Chosen Few with two members of Newcastle beatsters The Primitive Sect, guitarist John Turnbull and bassist Colin Gibson.

They became a five-piece with Graham Bell (b. 1948), a singer from Blythe who released a one-off single on Polydor: “(How Do You Say) I Don’t Love You Anymore” (b/w “If You’re Gonna Go”). With Bell at the helm, The Chosen Few picked a new name, Skip Bifferty, taken from a cartoon character that Gibson created at art school.

Skip Bifferty conquered the Tyneside club circuit and cut two demos at Impulse Studios in Wallsend: “The Other Side of Jesus Smith” and the Hull leftover “Schizoid Revolution.” The first of those was based on “Bess You Is My Woman Now” by Miles Davis from his soundtrack to Porgy and Bess.

In early 1967, Skip Bifferty moved to London and gained a residency at The Marquee, where they impressed booking agent Don Arden, who linked them with RCA Victor. They entered West Hampstead studio with producer Vic Smith (aka Vic Coppersmith-Heaven), whose credits up to that point included recordings by Marianne Faithful, Unit 4+2, and Polish jazz saxophonist Zbigniew Namysłowski. 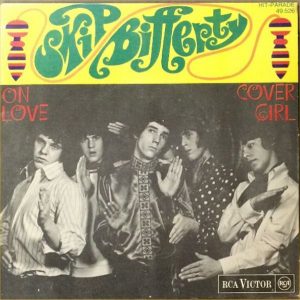 Skip Bifferty made their vinyl debut that August with the Bell/Turnball “On Love,” backed with the Bell/Gallagher “Cover Girl.” In France, the single appeared on RCA’s Hit Parade series in a picture sleeve with green bubble lettering. A young Roy Thomas Baker engineered this recording. 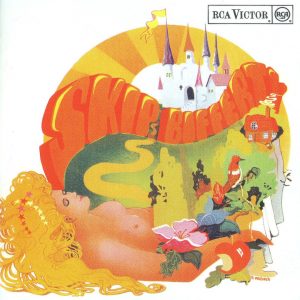 Skip Bifferty released their self-titled album on RCA Victor in 1968. It opens with the recent b-side (titled “Monkey Man”) and proceeds through 13 originals, mostly composed by Bell with Gallagher and/or Turnbull (credited as Turnball), including “When She Comes to Stay,” “Gas Board Under Dog,” “Yours for at Least,” and “Come Around.”

Gibson contributed to “Jeremy Carabine,” “Time Track,” and “Clearway 51.” Smith pitched in on “Follow the Path of the Stars” and “Planting Bad Seeds.” Bell lone-wrote “Inside the Secret.” His only non-write is the Gibson/Turnbull “Prince Germany the First.”

Skip Bifferty sports a psychedelic cover illustration by one R. Wagner. It shows a half-revealed starry-haired nude lady at the foreground. She lies shuttered before a snaky path that leads uphill to a skyline, which bears the band’s nameplate in orange bubble letters. A sunny arch and sky-blue castle top the visual.

The back cover is an illustrated b&w melange of angels, lovers, and swirling cloud formations around a sky castle. A fopped-out group pic is flanked with credits and liner notes by BBC Radio 1 DJ John Peel, an avid supporter who featured Skip Bifferty on his Top Gear program.

The members of Skip Bifferty grew weary of Arden and his practices. To break free of their contract and his posse, they announced their “breakup” in December 1968. In reality, they planned a new single under a pseudonym. 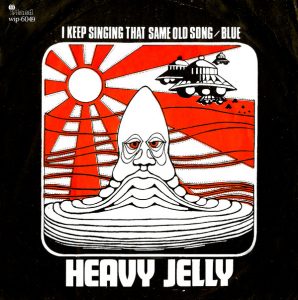 A recent review in the London music paper Time Out spoke of a fictitious band named Heavy Jelly, a name purportedly in consideration by several actual bands at the time. Skip Bifferty took the honor with their January 1969 release “I Keep Singing That Same Old Song,” a lengthy Gibson epic issued as Heavy Jelly. For this recording, Jackman cleared out for drummer Paul Nicholls.

At 7:49, the UK Island release of “I Keep Singing That Same Old Song” was one of the longest a-sides issued up to that point, exceeding The Beatles‘ “Hey Jude” by 38 seconds. European pressings of “Same Old Song” clock at 8:20.

Bell composed the b-side, “Blue.” The single was produced by Guy Stevens, who also worked on Supernatural Fairy Tales by Art, the prototype of Spooky Tooth — the band some listeners suspected of hiding behind the Heavy Jelly moniker. One journalist, Chris Welch, almost blew the lid when he wrote that the a-side “skips and biffs along” in his review of the single in Melody Maker.

In late 1969, Gibson and Bell teamed with three members of Newcastle beatsters The Happy Family in psych-rockers Griffin, which cut the Bell Records single “I Am the Noise in Your Head” (b/w “Don’t You Know”), produced by Alan Price. (After Bell left the project, the remaining four continued as Simpson’s Pure Oxygen, an unsigned act that their drummer, Alan White, kept on standby as he took a sequence of offers that culminated with him joining Yes in 1972.)

During 1970, Gallagher and Turnball recorded an album of covers by American singer/songwriter Tim Harding. Peacock Records later issued two cuts, “Smugglin Man” and “Misty Roses,” on a 1972 single with the duo listed as Turnbull and Arkwright.

Bell joined Every Which Way, formed by ex-Nice drummer Brian Davison. Their one album appeared on Charisma Records in 1970.

Gallagher and Turnball formed ARC with bassist Tommy Duffy and Australian drummer David Montgomery (Python Lee Jackson). In 1971, they released the album … at This on Decca. Later that year, Bell enlisted the band for the Charisma release Bell + Arc.

Bell went solo with the 1972 Charisma release Graham Bell, a soul-rock album with brass by Kenny Wheeler, Mel Collins, and Mark Charig (Centipede). It includes three originals (“Before You Can Be a Man,” “The Whole Town Wants You Hung,” “The Man With Ageless Eyes“), co-writes with keyboardist Bob Wilson and bassist Tim Drummond, and covers of Bob Dylan, JJ Cale, BB King, and Kris Kristofferson. That same year, Bell sang on one track (“1921”) on the London Symphony Orchestra version of The Who‘s rock opera Tommy.

In 1974, Bell sang backing vocals on Warm Blood, the solo debut of singer Carole Grimes (ex-Delivery), and made choral contributions to The Lamb Lies Down on Broadway by Genesis. After a long break from the industry, he resurfaced in Snowy White’s Blues Agency, which issued two 1988/89 albums on the German Bellaphon label.

Gibson did stints with Ginger Baker’s Airforce (1970), Mark-Almond (1972), and Snafu (1973–75). After guesting on one song (“Lost Symphony“) on Beginnings, the debut solo album by Yes guitarist Steve Howe, Gibson played on the 1976 release Ramshackled, recorded by Simpson’s Pure Oxygen and released as an Alan White solo album. Gibson later joined The Movies for their 1980/81 albums India and Motor Motor Motor.

When ARC folded, Turnbull teamed with bassist Norman Watt-Roy (ex-Greatest Show On Earth) in rustic-rockers Glencoe, which released two albums on Epic in 1972/73. In 1973, Turnbull played on Pipedream, the debut album by old mate Alan Hull. The following year, he interacted with Gallagher on the album Ain’t Gonna Play No Second Fiddle by singer Dana Gillespie. In 1976, Turnbull, Watt-Roy, and Gallagher issued one album as Loving Awareness, a project soon absorbed into Ian Dury‘s backing band the Blockheads.

Between projects with Turnbull, Gallagher played in Peter Frampton‘s Camel. In 1975, he played on Kick Off Your Muddy Boots, the first of two albums by the Graeme Edge Band, featuring the Gurvitz brothers (Gun, Three Man Army). During the late ’70s, he played on albums by The Only Ones, Rachel Sweet, and The Planets (Goon Hilly Down). He became an unofficial fifth member of The Clash on their 1979/80 albums London Calling and Sandinista.