The Skids were a Scottish New Wave/modern-rock band that released four albums and assorted shortplayers on Virgin between 1978 and 1981. Bill Nelson produced and played keyboards on their 1979 second album Days in Europa. Guitarist Stuart Adamson departed after the third album to form Big Country.

The Skids formed in Dunfermline during the summer of 1977 when guitarist Stuart Adamson and bassist William Simpson teamed with singer Richard Jobson and drummer Thomas Kellichan. The first two assembled the year prior in Tattoo, a punk-inspired band that did Bowie covers.

Adamson was born in Manchester but raised like the others in the mining areas of Dunfermline, where he took up guitar as a teenager, inspired by players like Bill Nelson of Be-Bop Deluxe. At school, he took an interest in literary texts and befriended his younger classmate, future crime writer Ian Rankin.

The Skids made their live debut at the Bellville Hotel on Pilmuir Street on August 19, 1977. Two months later, they recorded their first EP, Charles, issued the following February as a 7″ maxi-single on self-press No Bad Records, started by band-manager Sandy Muir. 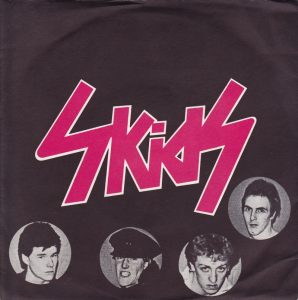 Charles features three songs: “Charles,” “Reasons,” and “Test Tube Babies,” all credited to Adamson. Members are identified only by their first names on the sleeve (Simpson is listed as “Alexander.”) The sleeve features a pink/black color scheme and striking, jagged band logo. Its release coincided with a high-profile Skids show at Edinburgh’s Clouds Disco for the “Stiff/Chiswick Challenge,” which also featured sets by fellow newcomers the Cuban Heels and Scars. 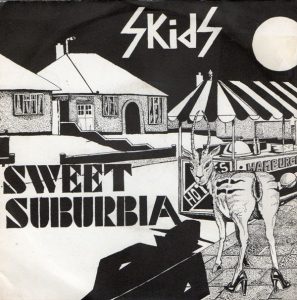 In May 1978, Skids signed to Virgin amid that label’s post-Pistols deep-dive into the New Wave (XTC, Magazine, Penetration, Interview, The Motors, The Members). That September, Virgin issued Skids second single, “Sweet Suburbia” (b/w “Open Sound“), both credited to Adamson (music) and Jobson (lyrics). The b&w sleeve illustration depicts an antelope in hind-heels on a deserted suburban street. 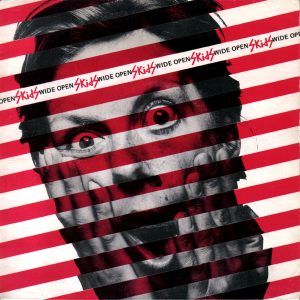 On October 25, 1978, the Skids issued Wide Open, their third single (and second EP) of the year. It features four Jobson–Adamson originals in the 2.5-minute range: “The Saints are Coming,” “Of One Skin,” “Night and Day,” and “Contusion.” Original 12″ pressings came on red vinyl. The black-white-red sleeve depicts a subject aghast before a candy-striped overlay. It was designed by Cooke Key, the designer of the Virgin Records logo who also did visuals for singles and albums by XTC (“Making Plans for Nigel”), Steve Hackett (Spectral Mornings), Rory Gallagher (Calling Card), and Tangerine Dream (Stratosfear). 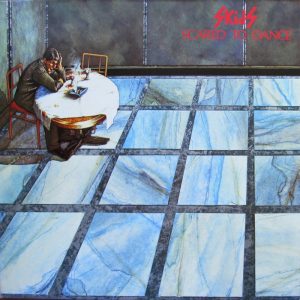 The Skids released their debut album, Scared to Dance, on February 23, 1979, on Virgin. 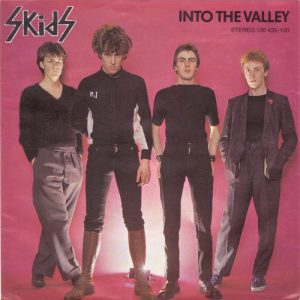 “Into The Valley” first appeared in early January as an advance single, backed with the non-album “TV Stars.” 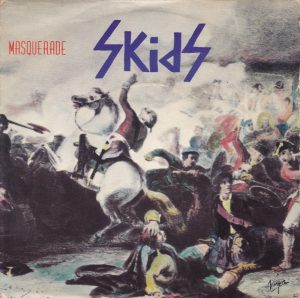 On May 18, 1979, the Skids issued “Masquerade,” a standalone single backed with “Out of Town.” The single appeared as both a regular 7″ and a double-7″ with two additional songs: “Another Emotion” and “Aftermath Dub.” 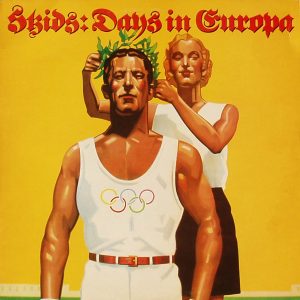 The Skids released their second album, Days in Europa, on October 12, 1979, on Virgin. 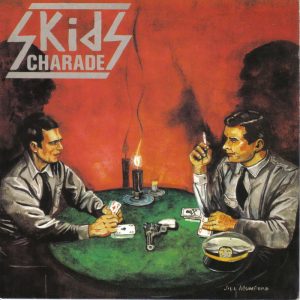 “Charade” appeared a fortnight earlier as the lead-off single, backed with the non-album “Grey Parade.” 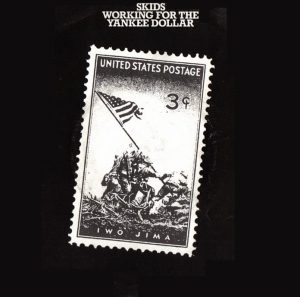 In mid-November, the Skids lifted “Working For The Yankee Dollar” as the second single, backed with the exclusive “Vanguard’s Crusade.” An alternate double-pack version contains two additional songs: “Hymns for a Haunted Ballroom” and the Mott the Hoople cover “All the Young Dudes.” 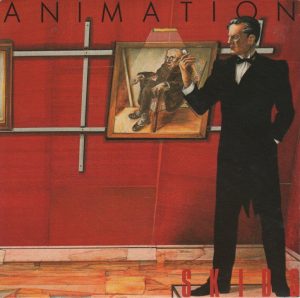 In late February 1980, Virgin lifted “Animation” as the third Europa single, backed with the album track “Pros and Cons.” 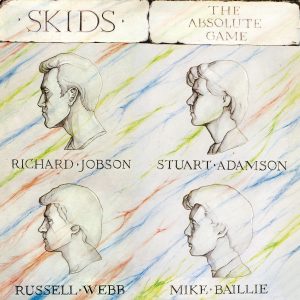 The Skids released their third album, The Absolute Game, on September 19, 1980, on Virgin. 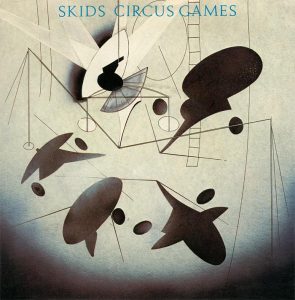 “Circus Game” and “One Decree” first appeared in late July as an advanced single. 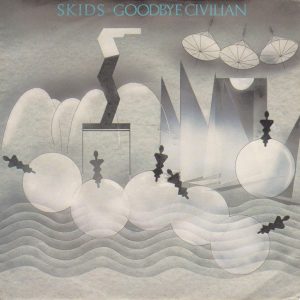 In October, the Skids lifted “Goodbye Civilian” as the second single, backed with the non-album “Monkey McGuire Meets Specky Potter Behind Lochore Institute.” 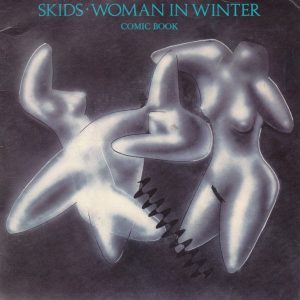 In late November, “Woman In Winter” appeared as the third Absolute Game a-side, backed with a live version of “Working for the Yankee Dollar.” Original copies contain a 12-page comic of a 1940s detective vignette starring the Skids. 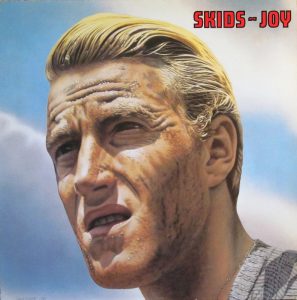 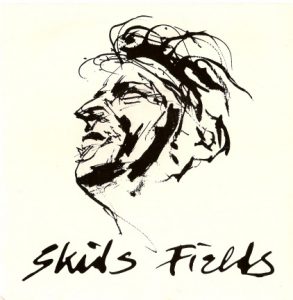 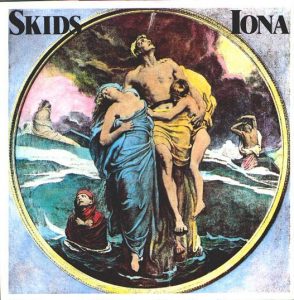 One week before Joy hit shelves, the side-one bookends “Iona” and “Blood and Soil” became the final Skids single.

Six Cylindres en V
Six Cylindres en V were a French avant-jazz/rock band from Reims, Champagne-Ardenne, that release...
Indians in Moscow
Indians in Moscow were an English New Wave/synthpop band from Kingston upon Hull that released a s...
Nightwinds
Nightwinds were a Canadian symphonic-rock band from Ontario that recorded album's worth of materi...
Miles Davis
Miles Davis (May 26, 1926 — Sept. 28, 1991) was an American jazz trumpeter with a recording career t...
Experiments With Ice
Experiments With Ice were an English coldwave band that released a self-titled album on United Dai...