Second Hand was an English post-psych band that released the album Reality on Polydor in 1968, followed by Death May Be Your Santa Claus on Mushroom in 1971.

They were the brainchild of keyboardist Ken Elliott and drummer Kieran O’Connor, who morphed the band into Chillum for an instrumental free-psych album. They later formed the synth-psych duo Seventh Wave.

In 1965, 15-year old Ken Elliott took up piano when his schoolmate, drummer Kieran O’Connor, suggested they start a band. Another of Kieran’s friends, guitarist Bob Gibbons, joined them in The Next Collection. Bassist Arthur Kitchener completed the first recorded lineup, which won a battle of the bands contest at the Streatham ice rink.

The Next Collection entered Maximum Sound Studios and cut two demos: “A Fairy Tale” and “Steam Tugs.” They impressed studio owner Vic Keary, who became their producer and linked them with another client, singer Denis Couldry of the pop-psych band Felius Andromeda. Couldry and The Next Collection cut the single “James In the Basement” (b/w “I Am Nearly There”), released in February 1968 on Decca.

Keary secured the band a deal with Polydor under a new name, The Moving Finger, a reference to 11th century Persian polymath Omar Khayyam. Halfway through recording their first album, Kitchener quit the band, which hired bassist Nick South to play on the remaining tracks. Though slated for a late-summer release, Polydor discovered another band called The Moving Finger on Mercury. Elliott and O’Connor renamed their band Second Hand, a reference to their second-hand music equipment. 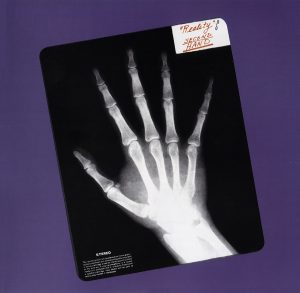 As Second Hand, they released the album Reality on Polydor in December 1968. The album features three Elliott/Gibbons numbers (“Rhubarb!,” “The World Will End Yesterday,” “Reality”) and five exclusive Elliot compositions: “A Fairy Tale,” “Steam Tugs,” “Good Old ’59 (We Are Slowly Gettin’ Older),” “The Bath Song,” and “Mainliner.” Kitchener left behind “Denis James the Clown” and “Denis James (Ode to D.J.),” both in ode to Couldry.

Reality was engineered by Mike Craig, an ongoing assistant of Elliott and O’Connor. The cover features an x-ray photo of a hand, designed by Diogenic Attempts Ltd., the firm behind 1968–70 album covers by the Incredible String Band, The Deviants, Nick Drake, Fairport Convention, Pentangle, Marsupilami, and Atomic Rooster. On early copies of Reality, the LP labels identify the band as The Moving Finger.

“Reality” and “Mainliner” appear on the 1970 Polydor comp Deep Overground Pop, a four-sided set with songs by the Crazy World of Arthur Brown, Cream, Trinity, Taste, Rare Amber, and the Jimi Hendrix Experience. Despite this, Second Hand left Polydor over insufficient label support.

During 1969, Second Hand embarked on multiple European tours and gained a cult following in France. South cleared out for bassist George Hart. Gibbons also left the band but went unreplaced as they headed back into the studio. They found a freestanding vocalist in Ken’s brother, Rob Elliott, whose Arthur Brown-like singing style altered their sound. 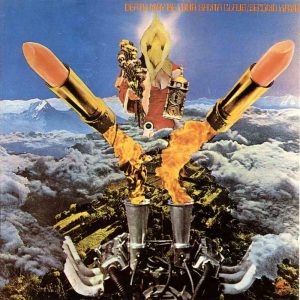 In late 1970, Second Hand recorded their second album, Death May Be Your Santa Claus. It was released in April 1971 on Mushroom, recently established by Keary as an outlet for folk, psych, and exotica recorded at Chalk Farm Studios (Simon Finn, Magic Carpet, Les Flambeaux, Αντρέας Θωμόπουλος, Pandit Kanwar Sain Trikha).

Death May Be Your Santa Claus is bookended by two thematically unrelated pieces that bear the album’s title, both composed by Ken Elliott, who also wrote the frenetic “Hangin’ On an Eyelid” and the avant-psych instrumental jam “Lucifer and the Egg.” He collaborated on select cuts with Hart (“Cyclops,” “Sic Transit Gloria Mundi”) and engineer Mike Craig (“Revelations Ch. 16 Vs. 9-21,” “Take to the Skies”). O’Connor contributed “Somethin’ You Got,” a fuzzed-out, discombobulated blues rocker that closes side one.

The album was released simultaneously with “Funeral,” a melodramatic orchestral number placed at the front of Santa Claus reissues.

Designer and photographer Ian Dovell is credited with the album art: lipsticks fired out of steam horns under a rose carrying, vagina-headed lady Santa; sky high above thick clouds and grassy lowlands.

Eliott played organ on the 1970 Mushroom release Pass the Distance by freak folkster Simon Finn. Along with O’Connor and Hart, he also played on the 1971 album Born Out of the Tears to the Sun by Greek folkster Andreas Thomopoulos.

With Keary’s encouragement, they cut two lengthy free-form psych jam, “Brain Strain” (21:46) and “Yes! We Have No Pajamas” (10:33). These formed the backbone of Chillum, released in December 1971 on Mushroom. On both tracks, Elliott’s gruff, distorted organ slabs collide with O’Connors rapidfire jazz-rock drumrolls and McGill’s bluesy, scaly licks and runs.

Original copies of Chillum are housed in a plain white sleeve with name and label stamps (front) and a blind-spot group shot (back). No information is given apart from writing credits on the three shorter pieces. “Too Many Bananas,” a four-minute experiment of multi-tracked drum and percussion, is credited to “Fish” (aka O’Connor). The interlude-length “Land of Thousand Dreams” and “Promenade Des Anglaises” are attributed to “Neck” (aka Ken Elliott.)

Chillum produced nearly 30 minutes of additional material, including the Ekseption-style instrumental “Celebration” and the sparse piano piece “This Is Not Romance.” Both are added to the album with three additional tracks on the 1998 See for Miles release Chillum… Plus.

Ken Elliott formed Vulcans, a studio reggae/library group that served as a showcase for his newly acquired ARP2600 synthesizer. In 1972, they released the album Star Wars on Trojan Records, a subsidiary of Island. It spawned the cult singles “Star Wars,” “Dr Spock,” and “Red Herring.” They morphed into Colonel Elliott & The Lunatics for their second album, Interstellar Reggae Drive, released in 1973 on the EMI reggae sublabel Rhino. Elliott also played on Growing, the 1973 third album by symphonic rockers Jonesy.

In 1973, Elliott and O’Connor reteamed as Fungus, which morphed into Seventh Wave, their name for the 1974/75 albums Things to Come and Sci-Fi, both released on Gull. The second features Rob Elliott, who also joined hard-rockers Strider for their 1974 second album Misunderstood.

Nick South played on albums by Claire Hamill and Murray Head (Say It Ain’t So) and did one-album stints in Blue Goose and Cafe Society. He joined Sniff ‘n’ the Tears for their 1980 second album The Game’s Up and stayed for their two subsequent releases.

Jimmie Spheeris
Jimmie Spheeris (Nov. 5, 1949 — July 4, 1984) was an American singer/songwriter from Los Angeles. ...
Pyranha
Pyranha were a Swiss jam-rock/psych band from Yverdon that released a self-titled album on Epsilon...
The Quick
The Quick were the English synth-funk duo of vocalist Colin Campsie and bassist/keyboardist George...
First Choice
First Choice were an American soul-funk vocal group from Philadelphia. Members: Rochelle Fleming...
The Koobas
The Koobas — initially spelled "Kubas" — were an English pop-psych band that released a pair of Py...