Salty Dogg were a New Zealander art-pop band that released the album Love to Play and Sing on EMI in the Australasian market in 1977.

Williams hailed from ’60s beatsters Freddie Keil and The Kavaliers. At the time of Salty Dogg’s formation, he was involved with rustic-rockers Waves.

Salty Dogg debuted in collaboration with novelty act The 1480 Good Guys on the 1975 single “Please Daddy Don’t Get Drunk This Christmas,” produced by Harvey. In 1976, Harvey and Williams were joined by ex-Sylvester Winch Style guitarist/vocalist Martin Winch. That same year, Salty Dogg released its first proper single, “Love To Play and Sing” (b/w “All Gone Away”) on Family and Parlophone. 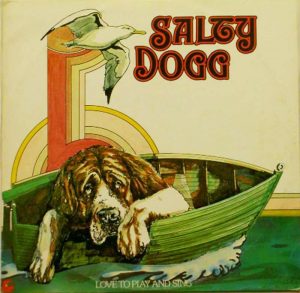 The a-side became the title-track of Salty Dogg’s singular album Love to Play and Sing, released in 1977 on EMI. The album begins with the sociopolitical clarion call “Face the Music,” issued as the band’s second single (b/w “How Long Can This Go On?”). Other tracks include the earnest ballad “Writing to You,” the funky/Rhodes-laden “Searching for You,” and the epic (11:46) two-part instrumental “Genesis.” The aforementioned numbers were all composed by Harvey, who produced the album with engineering assistance from Phil “The Phaser” Yule (Headband, Inbetweens).

Harvey went on to work with a slew of Antipodean acts, including John Rowles, Kim Hart, Simon Gallaher, Julie Anthony, and The Shaddos. As a solo artist, he released the album Great Expectations in 1979 on EMI.