Salamander was an English symphonic-rock band that released the album The Ten Commandments on Young Blood in 1971.

Titley took up guitar at age ten and played the Midlands clubs from age fifteen onward. After graduating from Wolverhampton College of Arts, he joined the pop-psych band Revolver, which featured Benson and future Fable frontman Peter Mackie. In 1969, they issued the covers single “Frisco Annie” (b/w “Imaginations”), produced by mogul Miki Dallon and released on his newly established Young Blood label.

Benson and Titley commenced a songwriting partnership that necessitated a new band equipped for their more elaborate material. They hired Chriss and Cook and renegotiated with Dallon as Salamander, named after the lizard-like amphibians of the family Salamandridae, native to the Holarctic realm. 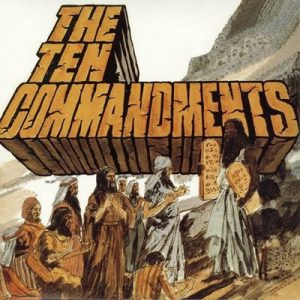 Salamander released their singular album, The Ten Commandments, in 1971 on Young Blood. It features ten Benson–Titley originals, each representing one of the ten commandments in the Hebrew Bible.

In 1973, Titley played bass, electric guitar, and percussion on the album Close To It All by the folk trio Saraband (formerly The Honeydew). In 1975, he penned both sides of the harmony-rock single “You Can Sing With the Band” (b/w “The Singer and His Songs“), released as Taragon on the pub-chained owned Birds Nest Records, which issued one album by hard-rockers Agnes Strange. He later toured with Colin Scot and the Pigsty Hill Light Orchestra.

The Ten Commandments first reappeared as a 20th anniversary CD reissue on the US archival label Laser’s Edge, which also reissued the 1971 self-titled album by Spring in addition to post-psych from Canada (Jackal, Spirit of Christmas) and symphonic rock from the US (Atlantis Philharmonic, The Load) and Europe (Dice, Island, Blue Motion, Schicke Führs Fröhling).

During the 2000s, The Ten Commandments reappeared again on Progressive Line (Australia, 2002) and Air Mail Archive (Japan, 2006). A 2007 reissue on HF is simply titled Salamander with a plain bold nameplate across a white sleeve. Further reissues bearing the original title and art have appeared on Guerssen (Spain, 2011) and Belle Antique (Japan, 2017).