Saga are a Canadian maximalist rock band from Oakville, Ontario, formed in 1977. Between 1978 and 1985, the band released six studio albums on Polydor, most of which were issued in Canada on the Maze imprint. A pair of albums on A&M followed in the late 1980s, after which the band reverted to Polydor for another round of discs in the 1990s. A further run of titles appeared on Steamhammer in the 21st century. 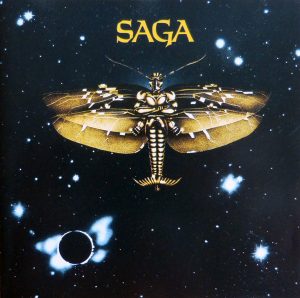 Saga released their self-titled debut album on Polydor in April 1978. Each side ends with a group-written composition: “Will It Be You? (Chapter Four)” and “Tired World (Chapter Six),” the first two installments of their out-of-sequence “Chapters” series. Most of the other tracks are J. Crichton/Sadler co-writes (“The Perfectionist,” “Give ’em The Money”) with select contributions from Ian and Rochon (“Humble Stance,” “Climbing the Ladder”). Jim wrote all the lyrics apart from two Sadler-penned numbers (“How Long,” “Climbing…”). The penultimate epic “Ice Nice,” an enduring fan favorite, was written solely by J. Crichton.

Saga was recorded the prior winter at Phase One Studios, Toronto, and Metalworks Studios, Mississauga, Canada. It was produced by Paul Gross, concurrent to his work with FM (Direct to Disc) and Aerial. The album was engineered by Alan Thorne who, ironically, worked on another 1978 album titled Direct to Disc (by Australian jazz-rockers Crossfire). The alien butterfly cover was illustrated by Rene Zamic with Saga visual designer Zoran Busic.