Rush was a Canadian maximalist hard-rock trio from Toronto, Ontario, that was active for nearly five decades, debuting on vinyl with a standalone single on Moon Records in 1973, followed by a self-titled album on the label in 1974. After a change of drummers, the lineup solidified around the trio of bassist/vocalist Geddy Lee, guitarist Alex Lifeson, and drummer/lyricist Neil Peart. Under this iteration, the band released 18 studio albums and assorted live sets on Mercury/Anthem between 1975 and 2012.

Rush played the Toronto club circuit for several years, during which time additional members passed through the lineup. In 1973, the trio issued their first single, “Not Fade Away” (b/w “You Can’t Fight It”), on self-press Moon Records. The a-side is a cover of the Buddy Holly song, made famous in 1963 by The Rolling Stones. The b-side is credited to Lee/Rutsey. It would be the drummer’s only recorded co-write for the band. 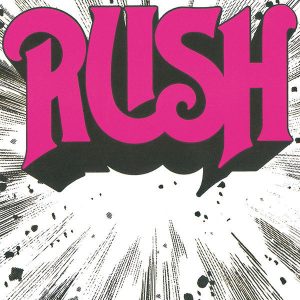 In March 1974, Rush released their self-titled debut album on Moon. It features eight Lee/Lifeson originals, including “Before and After,” “Working Man,” “Here Again,” and “Finding My Way.” The self-produced effort was recorded between March and November the prior year at Eastern Sound Studios and Toronto Sound Studios. The cover was designed by Paul Weldon (Duncan Browne, Moe Koffman, Fludd, Edward Bear). Midwest airplay of “Working Man” prompted Mercury to issue the album stateside, where the band toured as an opening act for Kiss, Blue Oyster Cult, and Manfred Mann’s Earth Band. On select dates, Rush headlined over Hawkwind, Babe Ruth, and Rory Gallagher.

Four months after the release of Rush, Rutsey quit due to complications from diabetes. He was replaced by Neil Peart (Sept. 12, 1952 – Jan. 7, 2020), who also became the band’s lyricists. This change initiated the classic Lee/Lifeson/Peart lineup that would last 41 years. 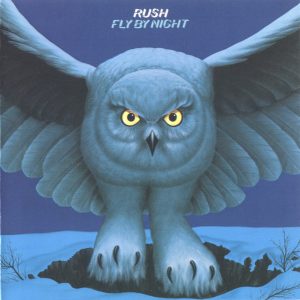 In February 1975, Rush released their second album, Fly by Night, on Mercury. It features eight originals, including “Making Memories,” the 6:51 epic “In the End” and the four-part suite “By-Tor and the Snow Dog.” The title-track was issued as a single, backed with the Ayn Rand-inspired “Anthem.” The album was co-produced between the band and Tom Brown, marking the start of an eight-year, eight-album partnership. 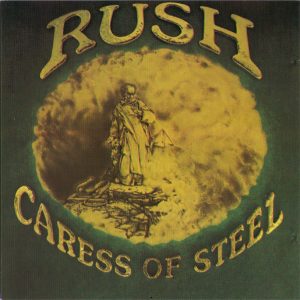 That July, Rush were back in the studio recording their third album, Caress of Steel, released in September 1975. Side one contains three brief songs — including the opener “Bastille Day” — and the 12-minute, three-part epic “The Necromancer.” Side two is consumed by the 19-minute, six-section suite “The Fountain of Lamneth.” The album was dedicated to the memory of original Twilight Zone host Rod Serling, who died that summer. 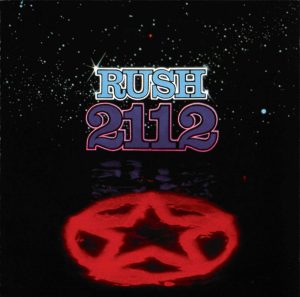 The following February, Rush recorded their fourth album 2112, released on April 1, 1976. Side one consists of the 20-minute, seven-part title-suite, inspired once again by Rand’s Anthem. Side two contains five tracks in the three-minute range, including “The Twilight Zone,” “Something for Nothing,” and the tender Mellotron-laden ballad “Tears.” The album quickly outsold their combined prior output and remains their second highest-selling release.

With four albums under their belt, Rush capped this phase of their career with the live double-album All The World’s a Stage. It documents the band on three consecutive nights at Toronto’s Massey Hall, June 11–13, 1976. It features lengthier renditions of “Bastille Day” and “By-Tor and the Snow Dog” (11:57) and a 15-minute medley of “Working Man” and “Finding My Way.” The 2112 suit is presented in a truncated five-part version. 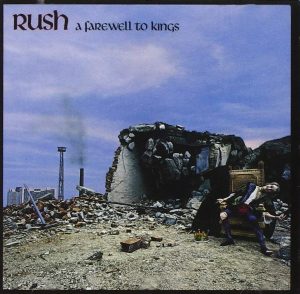 In June 1977, Rush entered Rockfield Studios in Wales to record their fifth studio album A Farewell to Kings, released that September. Both sides are half-consumed by lengthy epics: “Xanadu” (11:05) and the three-part “Cygnus X-1 Book I: The Voyage” (10:25), the latter marking the first part in a series continued on the following album. Of the shorter tracks, “Closer to the Heart” became a rare singles-chart entry for the band (UK #36, US #76, Can. #45). The lyrics to that number were co-written between Peart and his friend Peter Talbot. The titular album-opener “A Farewell to Kings” has since become a fan favorite. 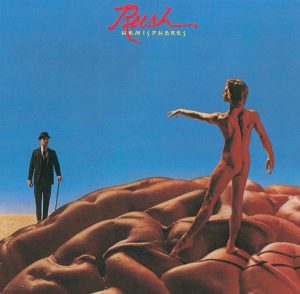 Sessions for Rush’s next album were split between Rockfield and London’s Trident Studios. The resulting Hemispheres was released in October 1978. Side one carries over from the last album with the six-part “Cygnus X-1 Book II: Hemispheres” (18:08), the third and final of the band’s side-long suites. The two shorter tracks on side two, “Circumstances” and “The Trees,” were both issued as singles. The album concludes with the multi-movement instrumental “La Villa Strangiato (An Exercise in Self-Indulgence)” (9:35).

Rush toured Hemispheres into the following year, playing select dates opposite Uriah Heep, Golden Earring, Wireless, April Wine, and the Pat Travers Band. For much of 1979, Rush toured the U.K. and Europe with Max Webster as the opening act. That January, Rush headlined over Blondie at Philadelphia’s Spectrum. 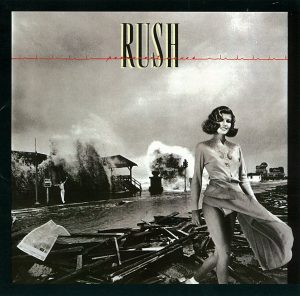 In January 1980, Rush released their seventh studio album Permanent Waves. It was recorded the prior fall at Le Studio in Morin-Heights, Quebec. The album features three songs per side, each with two shorter numbers followed by a longer piece. Album opener “The Spirit of Radio” (US #51) has since become an evergreen of classic rock radio and “Freewill,” a paean to rugged individualism, remains a fan favorite. The three-part epic “Natural Science” (9:20) closes out the album.

The tour behind Permanent Waves included a winter/spring U.S. jaunt with Max Webster, .38 Special, and Sue Saad and the Next, followed by a U.K. leg with support on select dates by Quartz, Saxon, and Van Halen. Also in 1980, Lee produced the album No Static by fellow Ontarian hard-rockers Wireless. Lee and Lifeson also appear on the track “Battle Scar” from the 1980 Max Webster album Universal Juveniles. 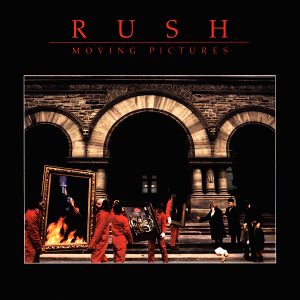 That fall, Rush returned to Le Studio to lay tracks for Moving Pictures, released in February 1981. The album contains some of the band’s most popular material, including “Vital Signs,” “YYZ,” and the hits “Tom Sawyer,” “Limelight,” and “Red Barchetta.” Side two begins with the two-part epic “The Camera Eye” (10:58), the last of their lengthy opuses from this period. “Tom Sawyer” is co-credited to Max Webster lyricist Pye Dubois, who recommended the idea to Rush when the two camps collaborated on “Battle Scar.”

Rush toured stateside during the first half of 1981 with support from Max Webster and FM, followed by an autumn string of overseas dates with Riot and Girlschool.

Having released another four albums since their first live double-LP, Rush repeated the feat with Exit… Stage Left, released that October. Recordings for this 76-minute set were taken from shows at Glasgow’s Apollo (6/10/80) and Montreal’s Forum (3/27/81). It features three songs apiece from the two recent albums, plus two apiece from Hemispheres and Kings (avoiding the Cygnus series) and one apiece from 2112 and Fly by Night. The track “Broon’s Bane” is Lifeson’s extended classical guitar intro to “The Trees.” 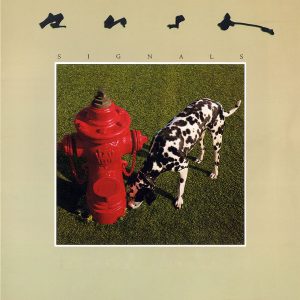 Rush spent the spring of 1982 at Le Studio recording tracks for Signals, released that September. The lead-off single “New World Man,” which summarizes the flawed brilliance of mankind, received heavy airplay that fall (Can. #1, US #21). The opening and closing numbers, “Subdivisions” and “Countdown,” were also issued as singles. “The Weapon” and “Chemistry” have since become fan favorites. This was their final album with producer Terry Brown, who went on to work with the Cutting Crew and Silent Running.

More than any other album in Rush’s catalog, Signals places greater emphasis on Lee’s synthesizers. FM violinist Ben Mink plays on the lucid “Losing It,” imparting elements of his own band, which worked similar synth-rock territory on the 1977–80 albums Black Noise, Surveillance, and City of Fear.

From September to December of 1982, Rush toured North America with Rory Gallagher as their chief support. As the Signals tour spilled into 1983, Golden Earring, Nazareth, and John Butcher Axis served as the opening acts. Also in 1983, Lee produced the eponymous debut album by the Ontarian New Wave band Boys Brigade. 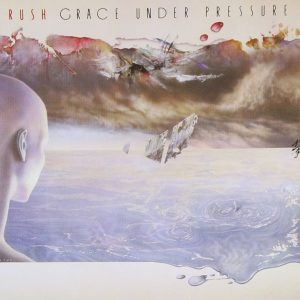 For their tenth studio album, Rush enlisted producer Peter Henderson (The Tubes, Supertramp, Real Life). Recorded over a five-month period at Le Studio, Grace Under Pressure was released in April 1984. The melodramatic lead-off track “Distant Early Warning” became another radio staple for the band. “Red Sector A,” which deals with the liberation of German prison camps at the end of WWII, was inspired by the experiences of Lee’s mother, a Holocaust survivor. Other notable tracks include “Between the Wheels,” “The Body Electric,” and “Afterimage,” the last two released as singles. Musically, the songs wed the riffing approach of 1980/81 Rush with the synth-laden sounds of Signals.

In 1985, Lifeson supplemented Ontarian rockers Platinum Blonde on the tracks “Crying Over You” and “Holy Water” from their second album Alien Shores. Peart, in a rare appearance outside Rush, is heard on the cut “Champion (of the World)” from the album Champion by Jeff Berlin & Vox Humana. 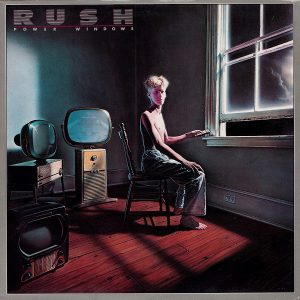 Rush divided their next sessions between England and Montserrat with producer Peter Collins (The Belle Stars, Musical Youth, The Piranhas, Tygers of Pan Tang, Blancmange, Matt Bianco, Nik Kershaw, Tracey Ullman). The resulting Power Windows was released in October 1985, forwarded by the lead-off single “The Big Money” (US ART #4). The video to that and its followup, “Mystic Rhythms,” were generously rotated on MTV. The album also features the fan-favorites “Emotion Detector,” “Middletown Dreams,” “Manhattan Project,” “Marathon,” and “Territories,” the last three released as singles. The band was augmented on these recordings by keyboardist Andy Richards (Strawbs, Demon, White Door, The Damned) and string arranger Anne Dudley (Art of Noise).

The Power Windows tour covered the first half of 1986 with support from Steve Morse, Marillion, and The Fabulous Thunderbirds. 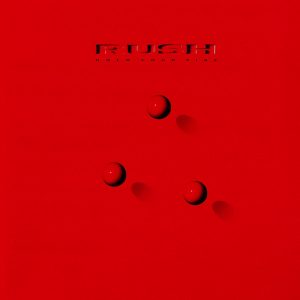 Rush teamed again with Collins on Hold Your Fire, released in September 1987. The recordings took place during the prior winter/spring months with sessions split between studios in England (The Manor, Ridge Farm), Montserrat (AIR Studios), and Toronto (McClear Place). The opening track, “Force Ten,” features another lyrical co-write between Peart and Pye Dubois. “Time Stand Still” features backing vocals by ‘Til Tuesday frontwoman Aimee Mann, who appears in the song’s video. Other popular tracks from the album include “Turn the Page,” “Lock and Key,” and “Open Secrets.” Richards appears once again as an instrumental fourth wheel.

To uphold their tradition of issuing a live double-disc after every fourth studio album, Rush released A Show of Hands in January 1989. The recordings were taken from shows on their 1986 and 1988 tours. Footage from a UK concert, filmed on 4/23/88 at Birmingham’s NEC Arena, was used for an accompanying video release.

Rahsaan Roland Kirk
Rahsaan Roland Kirk — aka Ronald Theodore Kirk (Aug. 7, 1935 — Dec. 5, 1977) — was an American woo...
Sax Pustuls
Sax Pustuls were a French avant-garde/New Wave band that released two singles and the album L'avis...
Azimuth
Azimuth were a contemporary jazz trio featuring English pianist John Taylor and his vocalist wife ...
Fiat Lux
Fiat Lux were an English synthpop trio that released a standalone single on Cocteau in 1982, follo...
Everything but the Girl
Everything but the Girl was an English sophisti-pop duo from Kingston upon Hull that released four...