Rumplestiltskin was an English hard-rock/psych studio band that released a 1970 self-titled album on Bell Records, followed by a 1972 second, Black Magician, on the German Bellaphon label. The members also recorded instrumental-psych albums as Hungry Wolf and Ugly Custard.

Rumplestiltskin was assembled in 1970 by four prominent British session musicians: keyboardist Alan Hawkshaw, guitarist Alan Parker, bassist Herbie Flowers, and drummer Clem Cattini. Their name is a variant spelling of the German folkloric imp Rumpelstiltskin, who spins a girl’s hair into gold in exchange for jewelry.

Hawkshaw first recorded with Emile Ford & the Checkmates and wrote songs for assorted beat groups and pop singers, including Mickey Finn & the Blue Men and Irish star Cloda Rogers. Recently, he played in the soul-funk project The Mohawks and toured Japan with The Shadows. Starting with the 1967 release The Sound of Pop, he featured on numerous library albums on KPM Music.

Parker played on various recordings from the mid-’60s onward, including cuts by Crispian St. Peters and the Alan Tew Orchestra. Much of his work went uncredited, such as with Donovan (“Hurdy Gurdy Man”). In 1970 alone, he played on albums by Billie Davis, Elton John (“Take Me to the Pilot”), Melanie, and Peter Collins.

Flowers first played in jazz groups and moved into pop and easy listening during the late ’60s. During 1969 and 1970, he played on albums by Brian Bennett, David Bowie, Hardin & York, Elton John (Tumbleweed Connection), and Sunforest.

Cattini initially drummed for Billy Fury and Marty Wilde, then joined Johnny Kid & the Pirates and co-founded The Tornadoes, playing on their 1962 transatlantic #1 “Telstar.” Later in the ’60s, he played on albums by Graham Gouldman, Joe Cocker, Jan & Lorraine, and Roy Harper. In 1970, he played on folk-rock albums by Jade, Edwards Hand, and Amazing Blondel.

Parker and Flowers recently started the popular soul-pop project Blue Mink (with American singer Madeline Bell). They also played on the 1970 debut album by the Collective Consciousness Society (CCS), formed by blues guitarist Alexis Korner. Along with Cattini, they recorded an instrumental-psych album as Ugly Custard. Concurrently, all three teamed with Hawkshaw for a soul-psych album as Hungry Wolf. For that and the Rumplestiltskin albums, they hired singer Peter Charles Greene, a Birmingham native who issued four 1966/67 pop singles on Decca as Peter Lee Stirling.

The band recorded Rumplestiltskin at IBC Sound Recording Studios in central London with producer Shel Talmy (The Kinks, The Who, The Creation, Manfred Mann). Each instrumentalist is listed under a pseudonym: Jeremy Eagles (Hawkshaw), Andrew Balmain (Parker), Jackson Primrose (Flowers), and Rupert Baer (Cattini). The album was released in 1970 on Bell Records in a gatefold sleeve. It was engineered by Damon Lyon-Shaw (Eclection, Pentangle, Cream, Tommy) with technical assistance by John Coldwell (Cressida) and effects by Hugh Murphy (Justine, Gracious, Jody Grind, Stray, Diabolus). 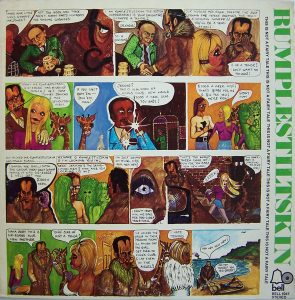 Rumplestiltskin features eight songs, bookended by the lengthy “Make Me Make You” and “Squadron Leader Johnson.” All were co-written by Hawkshaw and Parker with occasional help by Greene (five cuts), Cattini and Flowers (the treble “Rumplestiltskin”), and two with KPM associate John Cameron (“Mr. Joe (Witness for the Defence)” and “Pate de Foie Gras“). “Squadron” and “Pate de” were issued as a-sides, both backed by the band’s theme song.

Musically, the album demonstrates the era’s soulful hard-rock in the hands of seasoned studio players.

“Make Me Make You” is set to a shuffling, strum-and-sustain chordal bed (in E). Midway, it yields to a slow, dark, blues-lounge Greene spotlight. Soon, guitar and organ flareup, sliding into fugue-like Parker/Flowers interplay with wailing fretboard sustains.

“Knock on My Door” pits distorted double-tracked leads over peculating bass, interspersed with rhythmic dropouts for a downward-spiraling refrain.

The instrumental “Rumplestiltskin” is a spiky, noodly octave plunge (in E) over a strutting, rattling rhythm, which claims the middle with vibraslaps.

Overall, the raunchy yet refined guitarwork of Parker — who veers between rapidfire leads, elongated licks, and crackling riffage — is the dominant presence. His playing constantly hints at a sonic overspill yet always holds its balance. 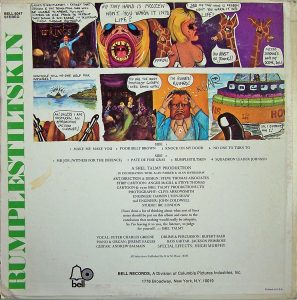 Rumplestiltskin sports a comic strip across the front and back cover, credited to Angus McGill and Steve Thomas Associates (Methuselah, Judas Jump). It portrays Rumplestiltskin as a scheming showbiz impresario who steals Gir-eorge, a singing giraffe, away from its owner, Rapunzel, and teams the animal with a failing opera singer, Dozy Diana, to perform selections from Madama Butterfly.

The innerfold has mirrored images of a nude hippy woman with her long hair spun ground-up into a churning wheel, surrounded by ink sketches of the folkloric imp. The photographer, Clive Arrowsmith, also took shots of the Jeff Beck Group (Rough and Ready), Boz Scaggs & Band, Fleetwood Mac (Mystery to Me), Patrick Moraz (The Story Of i), Gong, and Gino Vannelli (The Gist of the Gemini).

Between Rumplestiltskin albums, Hawkshaw played on the 1971 eponymous second solo album by blues-folk guitarist/singer Dave Kelley, then of the Fleetwood Mac-associated Tramp. One track, “The Fields of Night” features all of Rumplestiltskin’s instrumentalists. (Naturally, the other Peter Green plays guitar on the rest of the album.)

Two or more members also played on 1971 albums by Olivia Newton-John, Julie Covington, Serge Gainsbourg, and Marvin, Welch & Farrar. Parker played on Can I Have My Money Back?, the debut solo album by Scottish singer/songwriter Gerry Rafferty (between his stints in The Humblebums and Stealers Wheel).

In 1971, Rumplestiltskin issued “Wimoweh,” a cover of the 1961 hit “The Lion Sleeps Tonight” (colloquially known as “Wimoweh”) by doo-wopsters The Tokens, rendered here with the heavy crunch of Slade and the comedic vibe of Hotlegs. Copies of the single on the German Bellaphon label show the members in Groucho beards. It was backed with a taster from their upcoming album: “Through My Looking Glass,” a churning rocker with a fuzzy, pronged guitar figure, rattling percussion, and flaring vocals.

Their second album, Black Magician, appeared in 1972, but only in Germany on Bellaphon. The cover sports an illustration of an Indian Buddah in a red-lined robe by artist Roman Salicki. Of the 10 songs, all are Hawkshaw/Parker/Greene co-writes except “Can’t You Feel It” (Parker/Greene), “Black Magician’s Daughter” and “Evil Woman” (both Flowers/Greene).

An eager yet muted piano figure summons “Lord of the Heaven and the Earth,” where Greene as almighty calls the flock and prepares final judgement. Midway, the piano signals brisk strumming and intensified volume, overlaid with Parker’s wailing licks. Hawkshaw’s churchy organ lays bare on the final, fading moments.

On the rave-up rocker “Evil Woman,” Parker lays a gruff, staccato figure that breaks to slick, greasy licks on the galloping, tambourine-driven chorus, where soul-jazz Hammond and barroom piano run the day.

“I Am the Last Man” is set to a slow, foreboding arrangement with lyrics of poignant self-reflection, delivered with authoritative command by a husky-voiced Greene. The band rolls out in full force three minutes in, when a driving tempo and circular guitar figure (in Dm) underpin the harmonized chorus chant.

The “Black Magician’s Daughter” takes Greene by surprise over a descending, chromatic piano thump (in Dm), which cuts to a martial half-step bridge and gospelly chorus. In under three minutes, choice shifts in cadence take this song far from its music hall beginnings.

The bluntly titled “I’ve Had Enough of the Army” carries out the final seven minutes of the album with simmering riffs and misty percussion, which break for a dark, distant piano figure. The song resolves as a major-key singalong chant.

Style-wise, Black Magician strikes a balance between the refined, gospelly hard-rock of Spooky Tooth and the contrapuntal energy of Fuzzy Duck.

Talmy produced Black Magician amid sessions with Axiom, Spreadeagle, and String Driven Thing. The tracks “Loneliness Is What My Life’s All About,” “Lord of the Heaven and the Earth” and “Black Magician’s Daughter” were all issued as single sides.

Hawkshaw released dozens of library albums during the ’70s and ’80s on KPM, Bruton, and Music De Wolfe, including several that feature Parker. As a sessionist, he played on albums by Cerrone, Donna Summer (Once Upon a Time), Cliff Richard (Every Face Tells a Story), and Jane Birkin (Baby Alone In Babylone).

Cattini played with everyone from the Bee Gees, Hot Chocolate, and Paul McCartney (Thrillington) to Lou Reed, Slapp Happy, and Claire Hamill.