Ruefrex were an Irish New Wave/post-punk band from Belfast, formed in 1977 and active for 10 years. The band released three small-press singles between 1979 and 1983, followed by the 1985 album Flowers for All Occasions on Kasper/MCA.

Ruefrex debuted with the maxi-single “One by One” (b/w “Cross the Line” and “Don’t Panic”) in 1979 on Belfast’s Good Vibrations Records. They played a clutch of gigs across the Irish Sea, followed by a period of inactivity. They recommenced for the 1983 single “Capital Letters” (b/w “April Fool”) on Kabuki Records, a label started by friendly rivals Kissed Air. In 1984, Ruefrex issued “Paid In Kind” (b/w “Perfect Crime”) on two-press One By One. 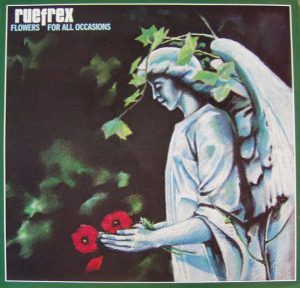 In 1985, Rueflex released their long-awaited album Flowers for All Occasions on private-press Kasper Records. It was picked up by MCA for stateside release. The album features 11 originals, mostly written by drummer/lyricist Paul Burgess and the non-performing Tom Coulter. Fan favorites include “Correct Your Fireside Manner/The Sources and the Energies,” “One by One” (a re-recording of their debut a-side), “Even in the Dark Hours,” and the title track. The album was produced by Mick Glossop (Magazine, Penetration, Skids, Interview, The Passions, Hambi and the Dance, The Alarm, Xmal Deutschland). The songs “The Wild Colonial Boy” and “In the Traps” were released as singles, the latter backed with the non-album “Lenders of the Last Resort.”

In 1987, Rueflex issued the five-song EP Political Wings on Flicknife Records. They disbanded soon after but regrouped in the 21st century.