Ruby Starr — aka Constance Henrietta Mierzwiak (Nov. 30, 1949 — Jan. 14, 1995) — was an American soul-rock singer from Toledo, Ohio, who released one album with the band Ruby Jones on Curtom in 1971. As a solo singer, she released three albums on Capitol between 1975 and 1977. Her stage name dates from her time in Black Oak Arkansas, which she joined as a backing vocalist in 1973 and toured with for three years. During the early 1980s, she released two albums with the band Grey-Star.

Known to her family as Connie, the young Constance Mierzwiak began performing as a tween under the name Connie Little. During her teens, she fronted a sequence of bands, including Connie and The Blu-Beats, The Downtowners, and The Blue Grange Ramblers. In 1969, she joined the soul-rock/psych band Ruby Jones, which issued a self-titled album on Curtis Mayfield’s Curtom label in 1971.

In 1973, she was spotted performing at a club by Jim Dandy, who immediately invited her to join his band Black Oak Arkansas. She toured with the band up through 1976, adopting the stage name “Ruby Starr” early in the stint. Her vocals feature on the BOA recordings “Jim Dandy” (#25, 1973) from the album High On the Hog and “Sure Been Workin’ Hard” from their 1974 release Street Party.

During her involvement with BOA, Starr signed to Capitol for a three-album run, starting with the 1975 release Ruby Starr & Grey Ghost. The album is co-credited to her backing band that featured the former rhythm section of Edgewood: bassist David Mayo (Paris Pilot, Washrag) and drummer Jeol Williams (Caboose, D. Beaver). Writing credits are split between the parties of keyboardist Marius Penczner (Target) and the team of Starr and BOA guitarist Jimmy Henderson. The album was co-produced by Stax studio engineer Ron Capone, whose prior credits include albums by Isaac Hayes, Margie Joseph, Rufus Thomas, David Porter, and Tower of Power.

In 1976, Starr released her second solo album Scene Stealer. The album retains its predecessor’s musical team save for the role of drummer, which is taken here by ex-BOA sticksman Tommy Aldridge, who subsequently backed Pat Travers and Ozzy Osbourne. 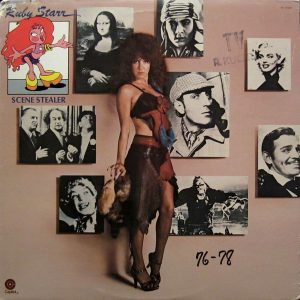 On Scene Stealer, Starr’s gritty caterwauling is underscored with a smokey barroom vibe throughout the album’s 10 songs, as heard in the jerky verse, plunging chorus, and rapid-fire outro of “Who’s Who.” Likewise, the stately “Love On Ice”  is characterized by brisk closed cadences, taut harmonies, and rapid organ filigree. A more audacious route is tread with the propulsive beat and bubbling synths of “Mass Transit”, the album’s longest track at 5:00. Further intensity is felt in the rising lurch and wailing guitar of “That’s It” and in the deep chordal twists that punctuate “Morning Glory.” A raspy rendition of the Paul McCartney evergreen “Maybe I’m Amazed” was released as a single. Overall, the album is comparable to the output of Smith, Stone the Crows, and Mama Lion.

In 1977, Starr wrapped her Capitol phase with the album Smokey Places, a covers-heavy set with familiar backing players and a few additional musicians, including Memphis session guitarist Jack Holder (BOA, Cobra, Drama). The album features her take on compositions by Jackie DeShannon (“When You Walk In the Room“), Peter Dello (“Do I Still Figure In Your Life?“), Denny Laine (“Time to Hide“), and the Buckingham Nicks number “Don’t Let Me Down Again.” A haunting cover of the Beau Brummels classic “Just a Little” was issued as a single on Harvest.

In 1981, Starr formed the hard-rock band Grey-Star in Milwaukee, Wisc., with a mostly unknown cast of musicians. The nameplate was a combination of her performance surname and that of co-vocalist Mike Grey. The band released a self-titled album that year on small-press Emotion Records, followed by 1983’s New Wave-influenced Telephone Sex, complete with a risqué cover that shows Starr erotically posed in pink lingerie.

Returning to solo work, Starr issued the solo single “Under Your Spell” / “Pick Up Speed” in 1984. Later in the decade, she fronted the band Henrietta Kahn on a series of Midwest club dates before settling in Las Vegas during the early 1990s.

Starr passed away from lung cancer in January 1995 at age 45. A 17-song collection of newly-earthed material titled The Lost Tapes was issued by BOA alumnus Rickie Lee Reynolds. Released in honor of the Ruby Starr Trust Fund, proceeds from the CD were donated to the St. Jude’s Children Hospital for the benefit of cancer research.