Roy Wood is an English singer, songwriter, multi-instrumentalist, and bandleader from Birmingham who emerged as the musical mastermind of ’60s pop-psych band The Move, which evolved into Electric Light Orchestra (ELO) during the early 1970s. After recording one album with ELO, he left the project to form Wizzard. Starting with the 1973 release Boulders, he issued sporadic solo material.

Wood, the Move’s chief writer, sang lead on half their songs, despite the initial presence of designated vocalist Carl Wayne. Initially a guitarist, Wood expanded to keyboards on the band’s second album Shazam in 1970. By the time of their third album Lookin On, he played woodwinds and stringed instruments. The latter album marked the arrival of fellow songwriter and multi-instrumentalist Jeff Lynne, whose talents prompted Wood to share creative power on the 1971 album Message From the Country. That same year, they premiered their classical-rock fusion concept Electric Light Orchestra with the album No Answer.

Soon after that release, Wood left ELO in Lynne’s hands and formed the harder-rocking, retro-tinged Wizzard. They recorded three albums and ten singles over a four-year period, starting with the 1973 release Wizzard’s Brew. Concurrently, he debuted as a solo artist with the album Boulders on Harvest. He continued his dual-activity with two 1975 albums: Wizzard’s Introducing Eddie and the Falcons and the solo release Mustard.

In 1976, Wizzard recorded a brassier album that remained unreleased for many years but anticipated the sound of Wood’s followup act the Wizzo Band on the 1977 Warner album Super Active Wizzo. That same year, he produced the album Annie in Wonderland for Renaissance vocalist Annie Haslam, his girlfriend at the time. After the release of his 1979 album On the Road Again, he rolled back his activities, producing only one album during the following decade.

Roy Wood was born on November 8, 1946, in Kitts Green, a suburb of Birmingham. In the early 1960s, he played in The Falcons, a Midlands rock ‘n’ roll band. In 1963, he joined Gerry Levene and the Avengers. He briefly attended the Moseley College of Art, the alma mater of pop artist Peter Phillips, singer–keyboardist Christine McVie (Chicken Shack, Fleetwood Mac), and (years later) UB40 frontman Ali Campbell. Moseley expelled Wood in 1964.

The Move scored hits with the 1966–68 singles “Night of Fear,” “I Can Hear the Grass Grow,” “Flowers in the Rain” (b/w “(Here We Go Round) the Lemon Tree”), and “Fire Brigade” (b/w “Walk Upon the Water”) — all in advance of their debut album Move. By 1968, they were one of the UK’s biggest acts, scoring further hits with “Curly,” “Blackberry Way,” and “Wild Tiger Woman.” Wood wrote the bulk of their material, including all the hits.

By 1969, Wood amassed an assortment of odd instruments (cello, steel guitar, mandolin, cittern, bouzouki, double bass, saxophones, brass, bassoon) that he collected with Move royalties. As The Move dealt with lineup changes and artistic conflicts, Wood practiced these instruments and wrote material outside the band’s range. Little by little, he recorded these pieces during off-time from the group.

In February 1970, the Move released Shazam, comprised of longer, heavier, more theatrical numbers and forays into folk and classical music. The stylistic change prompted Wayne’s exit. Wood asked Lynne, a longtime mate and musical kin, to join the Move. Meanwhile, Wood envisioned a new musical concept: a rock band with chamber strings dubbed Electric Light Orchestra. Lynne joined the Move on the condition that they transition to the ELO concept.

In mid-1971, the lineup of Wood, Lynne, and Bevan commenced work on the first Electric Light Orchestra album. To fund the project, they recorded one further Move album, Message from the Country, and continued charting with the 1971/72 singles “Tonight,” “Chinatown,” and “California Man.”

ELO’s sound was initially hard to replicate live. Amid conflicts with their manager and discontent with their first tour, Wood left the project during sessions for their second album, ELO 2. Lynne assumed leadership of ELO, which grew to a septet and released the finished album in 1973. Wood’s bass and cello work on the tracks “In Old England Town (Boogie No. 2)” and “From the Sun to the World (Boogie No. 1)” are his final contributions to ELO.

When Wood fled the ELO 2 sessions, he walked up-street to another studio and bumped into bassist Rick Price, Kefford’s replacement in the Move for the 1969/70 period. 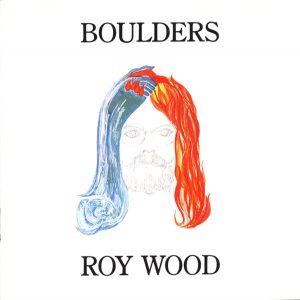 Roy Wood released his debut solo album, Boulders, in June 1973 on Harvest. It features nine self-performed originals recorded between 1969 and 1971. Wood plays an assortment of string and wind instruments that he collected with his earnings from the Move’s success. He also painted the unfinished self-portrait on the cover.

Musically, Boulders encompasses folk, pop, bluegrass, and retro rock with chamber and baroque flourishes. The 7:29 rock medley that closes the album is a sequence of late-fifties and early sixties pastiches.

“Songs of Praise” is a jolly strum-along (in D) with a gospelly chorus. Wood recorded his backing harmonies at half-speed to achieve the child-like voices. He first submitted this song to the British–Australian MOR folk-pop group the New Seekers, whose version appears on their 1971 album We’d Like to Teach the World to Sing (UK version). The track vaguely recalls the Move’s “Omnibus.”

“Wake Up” is a plucked bouzouki ditty with a singalong vocal melody, countered by flute and a bowed string break. A splashing sound provides the rhythmic component. It ends with backward vocals and simulated duck sounds.

“Rock Down Low” is a gruff neo-fifties rocker with with crunchy saxophone, honky-tonk piano (mixed low), and a cello break. Standard 12-bar progression in B♭.

“Nancy Sing Me a Song” is a folksy tune with plucked, angular chord changes and an arching vocal melody. Chorus line: “Nancy, Nancy, sing me a song… something to make my hair grow long.”

“Dear Elaine” has a chamber-folk arrangement with mandolin, cello, and vocals, all multi-tracked to fullness. A capella middle.

“All the Way Over the Hill” is an electric harmonized singalong with an ascending–descending progression rooted in C; marked with fretless bass, tambourine, and fifties doo-wop vocals; interjected with a finger-picking, sitar-laden break. It ends with “Irish Loafer (and His Hen),” a Celtic shuffle with striking double-tracked cello.

“Miss Clarke and the Computer” is a finger-picking mandolin folk lullaby with glockenspiel and disguised vocals (Wood assuming the voice of a children’s television character, ala Sesame Street). Brief jazzy break with walking contrabass. It’s sung from the point of view of a failing robot calling out to its owner.

“When Gran’ma Plays the Banjo” is a knee-slapping bluegrass ditty about an old grannie who impresses hillbillies with her banjo playing. She gradually speeds up to much applause from the townsfolk.

The Rock Medley: “Rockin’ Shoes” is acoustic rockabilly with brush drums, twangy leads, and Presley-esque vocals. It breaks into “She’s Too Good for Me,” a strummed, uptempo harmony pop number reminiscent of the Everly Brothers. It blends into “Locomotive,” a rockier number with thick sax and caterwauled vocals — a musical cross between Little Richard and present-day glam, similar to the Move’s recent “California Man.”

Wood had collected second-hand instruments since age 17, most of which he’d never played. As he tested out these instruments, new melodies sprung that didn’t fit within the Move’s musical framework. During 1969, as the Move coped with setbacks — the loss of Trevor Burton; a cancelled US tour; a change of bassists; a stifling tour of the UK cabaret circuit; the alienation of singer Carl Wayne — Wood recorded his new ideas at Phonogram and Abbey Road Studios, London. The recordings took place between the Move’s 1969 single “Curly” and the sessions for their 1971 album Message from the Country.

The Phonogram recordings were engineered by Roger Wake, a soundman on 1969–71 albums by Ambrose Slade, Cochise, Czar (self-titled), Gracious (Gracious!), Harsh Reality, Kaleidoscope, Linda Hoyle (Pieces of Me), Nucleus (We’ll Talk About It Later), and the Move’s Looking On.

Boulders is housed in a gatefold sleeve with a monochrome shot of Wood playing cello (back) and sepia studio pics (inner-gates). Wood left the cover painting unfinished at EMI’s suggestion. In its promotions, EMI emphasized that Boulders is a solo effort in the true sense because Wood handled the writing, arrangements, instrumentation, vocals (including multi-tracked harmonies), and production. (Todd Rundgren did the same on most of his albums from 1972-onward, starting with Something / Anything?).

Boulders was preceded by the single “When Gran’Ma Plays the Banjo” (b/w “Wake Up”), released sixteen months earlier in February 1972 when Wood was still part of ELO. The album — long delayed by Wood’s management to avoid conflicts with Move or ELO releases — appeared three months after Wizzard’s Brew (released in March 1973).

Boulders reached No. 15 on the UK Albums Chart. Harvest lifted “Dear Elaine” (b/w “Songs of Praise”), which reached No. 18 on the UK Singles Chart. United Artists issued the album in North America, where Boulders reached the US Billboard 200. In 1977, Harvest (UK) and Sonopresse (France) reissued Boulders with a saturated xerox of a cello-playing Wood against a stark black background.

Al Stewart
Al Stewart is a Scottish singer/songwriter who emerged from the British folk boom of the mid-1960s. ...
The Bowles Brothers Band
The Bowles Brothers Band was an English Western-swing/folk group that released the album Roger Buy...
Bad Company
Bad Company were an English hard-rock supergroup that released six albums on Swan Song between 197...
Azar Lawrence
Azar Lawrence (born Nov. 2 1953) is an American jazz saxophonist from Los Angeles who released thr...
Galdston & Thom
Galdston & Thom were an American rustic-folk/pop duo that released the album American Gypsies ...