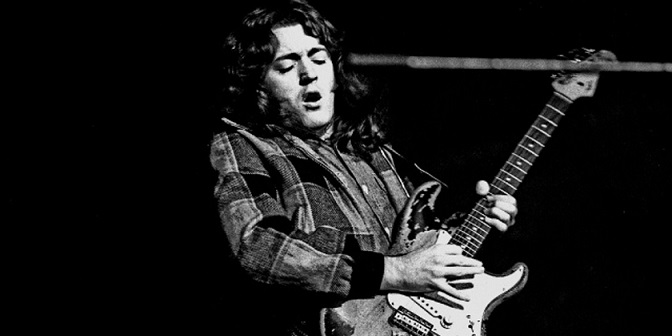 Rory Gallagher (March 2, 1948 — June 14, 1995) was an Irish blues-rock/hard-rock guitarist who was active between the late 1960s and early ’90s. He first emerged as the frontman of Cork power-trio Taste, which issued two albums circa 1969/70. He launched his solo career with back-to-back albums on Atco/Polydor in 1971. His popularity peaked with the 1976 album Calling Card.

William Rory Gallagher was born on March 2, 1948 in Ballyshannon, County Donegal, to an electrician father and actress mother. He was mostly raised in Cork with his younger brother Dónal  (b. 1949). Both boys were encouraged to enter music at an early age.

At age nine, Rory got his first guitar and soon mastered other instruments, including mandolin, banjo, and the coral sitar. His earliest influences were skiffle and rock n’ roll. Through artists like Lonnie Donegan and Muddy Waters, he discovered the folk and blues styles that would inform most of his work.

In 1963, Gallagher joined the six-piece Irish showband Fontana, which played the day’s hits. Under his influence, they gradually morphed into the R&B/beat quintet The Impact. Toward the end, it was down to him and two other members, the bassist and drummer. After they toured Europe, Gallagher decided he liked the rock trio format.

Settling back in Cork, Gallagher formed The Taste with bassist Eric Kitteringham and drummer Norman Damery. They issued the single “Blister on the Moon” (b/w “Born on the Wrong Side of Time”) on Major Minor in 1968.

Gallagher then moved to Belfast and formed a new iteration of the trio, this time called Taste, with bassist Richard McCracken and drummer John Wilson. They signed to Polydor and released two albums, Taste (1969) and On the Boards (1970).

A few months after their performance at the Isle of Wight Festival, Taste disbanded amid managerial and internal disputes. McCracken and Wilson formed Stud with ex-Blossom Toes guitarist Jim Cregan. Gallagher retained his Polydor ties and launched a solo career.