Room was an English jazz-rock/soul band from Blandford Forum, Dorset, that released the album Pre-Flight on Deram in 1970. 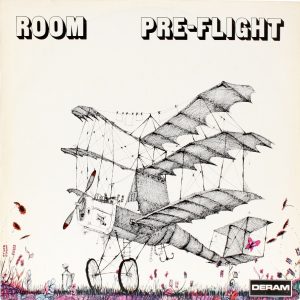 Room formed in 1968 and underwent a series of lineup changes before settling on the five-piece soul-rock iteration with Jane Kevern on vocals. They released their singular album Pre-Flight on UK Deram (SML 1073) in 1970. It features seven originals, including “Andromeda,” “War,” “No Warmth In My Life,” and the epic “Cemetery Junction (Part I & II).” The songs were primarily written by lead guitarist Chris Williams, save for the two-part title-track, written by rhythm guitarist Steve Edge.

Pre-Flight was first reissued on Deram Japan in 1990. It has since received more than 10 further re-pressings on Si-Wan (South Korea), Akarma (Italy), Private Area (Russia), and other specialty labels.

Timebox
Timebox were an English rock combo of the late 1960s that included vocalist Mike Patto and guitarist...
Mushroom
Mushroom were an Irish folk-rock band that was active during the first half of the 1970s. In 1973,...
The Pretty Things
The Pretty Things were an English rock band, originally formed in 1963 by guitarist/vocalist Dick Ta...
Omnibus
Omnibus were an American psych-rock band from New Milford, NJ, that released a self-titled album ...
Julie Driscoll
Julie Driscoll (born June 8, 1947) is an English vocalist who recorded a pair of singles for Parlo...