Rikki and the Last Days of Earth were an English art-punk band from Tamworth, Staffordshire, that released two singles on DJM in 1977, both included on the 1978 album 4 Minute Warning. In 1979, vocalist Rikki Sylvan served as a studio hand for Gary Numan on the albums Replicas and The Pleasure Principle. As a solo artist, Sylvan released the album The Silent Hours on Kaleidoscope Records Ltd. in 1981.

Sylvan had a background in library music. On the 1973 Chappell release Electronic Music, he co-created nine of the 18 tracks with composer/arranger John Leach. (Though comprised of two parties, Leach/Condron and French composer Nino Nardini, Electronic Music appears under the fake band moniker The Machines.) 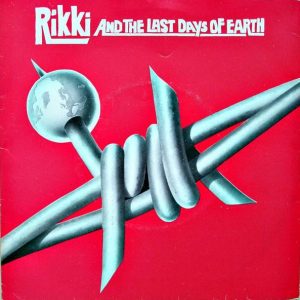 The Last Days permanent drummer, Hugh Inge-Innes Lillingston, arrived just prior to their May 28, 1977, live debut at The Man in the Moon in Chelsea. The following day, they self-pressed 200 copies of their first single, Oundle Rocsoc. It features early versions of two songs, “City of the Damned” and “Picture of Dorian Gray.” That summer, they signed to DJM. 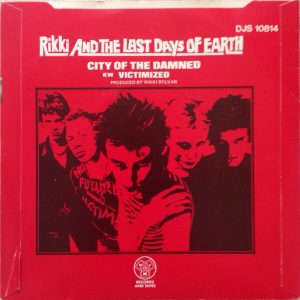 A re-recorded “City of the Damned” (b/w “Victimized”) appeared in November 1977. The bright red picture sleeve and record label show a globe at the pointed tip of a barbed wire knot. The back shows a xerox image of the band in punk attire, including a zip-shirt with the words “NO FUTURE” over the word “VICTIMIZED,” a reference to themselves and the Sex Pistols.

In January 1978, they issued their second single “Loaded” (b/w the Rolling Stones cover “Street Fighting Man”). The picture sleeve is a blue version of its predecessor. 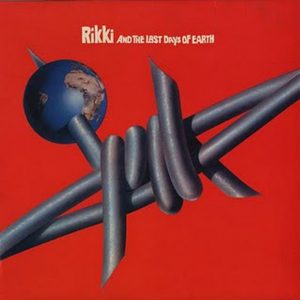 Rikki and the Last Days of Earth released 4 Minute Warning in the spring of 1978 on DJM. It features the aforementioned songs (minus the Stones cover), plus nine other tracks, including “B Movie,” “No Wave (It’s So Simple…),” “Aleister Crowley,” “Amsterdam,” “Solo Street,” and “Twilight Jack.” Sylvan produced the album and wrote all the songs.

4 Minute Warning uses the same label graphics as the single and appropriates the “City of the Damned” sleeve. Here, the wire and globe are rendered color-real with the logo shrunk against the red background. The back cover shows a full-color photo of the band, each member clad in black and striking tough guy poses. In Brazil, the album appeared as Rikki and the Last Days of Earth with the back shot placed below the front illustration.

In September 1978, Rikki and the Last Days shed “of Earth” from their name and issued their third and last DJM single, the non-album Sylvan originals “Tokyo” and “Haven’t Got a Face.” Concurrently, Sylvan produced the single “Year of the Rats” by fellow DJM punk act Satans Rats. The Last Days started work on a second album but it was canned when DJM annulled their contract.

Just as 4 Minute Warning neared release, Sylvan prepared an instrumental solo album, Radio Mercury. Though slated for an April 1978 release on DJM (cat# DJF 20536), it was vaulted by the label.

In the winter of 1978–79, Sylvan mixed Replicas, the April 1979 sophomore release by Tubeway Army. That summer, he did the same on The Pleasure Principle, the first proper solo album by Tubeway frontman Gary Numan.

As a producer/mixer, Sylvan’s name appears on 1980–85 records by Random Hold, The Room, Robin Stammers and Flesh Habit, Crown of Thorns, James Harris, The Fleshtones, and The Lords of the New Church. In 1985, Sylvan arranged the New Southern Library release Classics 1 with high-tech adaptations of works by Bach, Beethoven, Debussy, Dvorak, Mendelssohn, Tchaikovsky, and Vivaldi.

Though not formally reissued, 4 Minute Warning got an undated CDr pressing on Retro Records, a UK punk bootleg label.