Rare Gems were an American soul-funk band from Los Angeles that released an album as Rare Gems Odyssey on Casablanca in 1977, followed by a second under the truncated name on California Gold in 1978. They formed in 1969 and originally performed as Black Rare Gems.

Rare Gems Odyssey debuted on vinyl in the mid-’70s with the undated Renfro single “Touchdown” (b/w “It Don’t Take Much”). The a-side was written by Elwin Rutledge (David Ruffin, Love Unlimited Orchestra, Sunrise Movement); the flipside is a band original by keyboardist Johnny Ross. 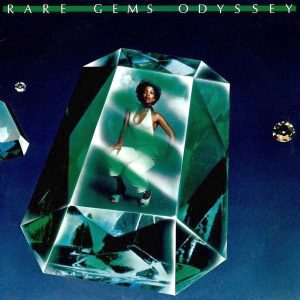 The band’s first album, Rare Gems Odyssey, appeared in 1977 on Casablanca. It features eight songs, including the brisk staccato groove “Restricted Area,” the clavinet/brass strut “We are Rare Gems Odyssey,” the string-enflowered belter “Love Won’t Set Me Free,” and the syncopated call-and-response “What is Funk?” The last two were issued as singles. The album was produced by Arthur Wright (Afrique, Side Effect, Wright Bros. Flying Machine) with assistance on select tracks by Mel Bolton (Johnny Hammond, High Inergy, Mighty Fire). Two tracks were supervised by studio-tech Sye Mitchell, who worked the following year with Lalomie Washburn.

Rare Gems dropped “Odyssey” from their name to avoid confusion with the soul-funk trio that scored a breakout hit in 1977 with “Native New Yorker.” Casablanca — dismayed with Rare Gems’ inability to match the success of fellow acts on the label’s roster (Donna Summer, Kiss, Parliament) — dropped the band, which moved to small-press California Gold for 1978’s Million Dollar Disco. Clocking in at 28:32, the album features seven songs: six written or co-written by guitarist Jimmy Gough; one (” I Like Disco Music”) credited to Ross. “You’ve Got My Love” was released as a single.

In 1981, Rare Gems issued the single “Pop (Pop – Lock)” on Magic Disc Records. The band continued to tour throughout the decade. The cassette-album Bouncin Back appeared on self-press Imagination Records in 1987.

“What is Funk?” and its parent album Rare Gems Odyssey have since become classics in the rare groove scene.