Rare Bird was an English organ-rock quartet that released two albums on Charisma in 1969 and 1970, followed by three further titles on Polydor between 1972 and 1974. They are best known for the songs “Beautiful Scarlet,” “Sympathy,” the side-long suite “Flight,” and their 1972 maxi-album Epic Forest. Along with contemporaries ELP, Atomic Rooster, Quatermass, and Van der Graaf Generator, they were among the first rock bands with no guitar.

Field and Kaffinetti wanted a guitar-free quartet with a singing bassist. Impressed with Gould’s baritone, they reassigned him to bass and dropped Randall from the lineup.

Rare Bird played one of their earliest concerts to a floored crowd at the Mothers’ Club in Birmingham. Weeks later, they had a management agency that linked them with Charisma, a newly formed post-psych label headed by Nice manager Tony Stratton Smith. 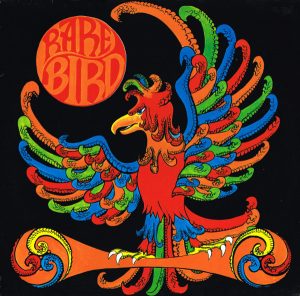 Rare Bird released their self-titled debut album in November 1969 on Charisma (UK). It features nine group-written originals, including “You Went Away,” “Natures Fruit,” “Melanie,” and the lengthier “Iceberg,” “Beautiful Scarlet,” and “God of War.”

Rare Bird was produced at Trident Studios by John Anthony, whose prior credits consisted of two 1969 releases on Mercury: the debut album by Van Der Graaf Generator (The Aerosol Grey Machine) and a one-off single by Smile (“Earth”), the prototype of Queen. The album was engineered by Malcolm Toft, who worked on 1968/69 albums by Aphrodite’s Child, The Nice, Tyrannosaurus Rex, and the second self-titled album by David Bowie.

Rare Bird was the inaugural release on Charisma (cat# CAS 1005), followed three months later by the second VDGG album (The Least We Can Do Is Wave to Each Other). The sleeve design, by illustrator Martin Davis, features a colorful “rare bird” (front) and a b&w group shot (back), dwarfed by trees and surrounded by credits. Stratton-Smith wrote the liner notes, stating “Rare Bird are a rare find, innovative, original, deeply musical. They’re one of their own.”

In February 1970, Charisma lifted the ballad “Sympathy” as a single, backed with the non-album “Devil’s High Concern.” The a-side, inspired by Giazotto’s reconstruction of Albinoni’s Adagio, hit the UK Top 30 and reached #1 in Italy and France. By then, Rare Bird appeared internationally on Philips (Europe) and ABC/Probe (North America). In France, Italy, and South Africa, the album was retitled after the hit. 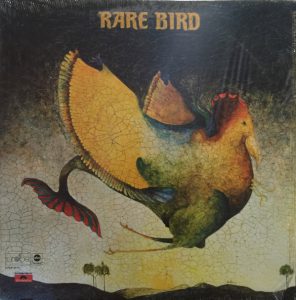 Probe copies, which flip sides one and two, sport a different cover by the in-house team of Henry Epstein and William Duevell, also responsible for 1969/70 cover visuals for Ahmad Jamal and Eddie Holman. It shows a floating turkey mosaic (front) and a medium b&w group shot (back).

“Beautiful Scarlet” was covered by German rockers Swegas on their 1971 release Child of Light and the following year by Capability Brown on their debut album From Scratch. 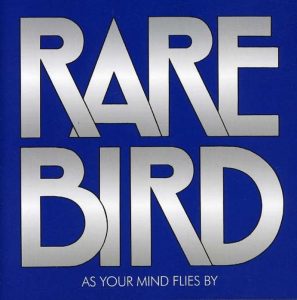 Rare Bird’s second album, As Your Mind Flies By, appeared in September 1970 on Charisma (UK), Philips (Europe), and ABC (North America). Side one features two medium-length band originals, “What You Want to Know” and “I’m Thinking,” which sandwich the shorter numbers “Down On the Floor” and “Hammerhead.” Side two consists of Flight, a 19-minute suite in four parts: “As Your Mind Flies By,” “Vacuum,” “New Yorker,” and “Central Park.”

Rare Bird self-produced the album with engineer Bryan Stott, a technical hand on 1970/71 albums by Titus Groan, the Bee Gees, Tony Hazzard, and Fields (the upcoming project of Graham Field).

Charisma paired “What You Want to Know” and “Hammerhead” onto 7″. In Europe, Philips issued the single with a different sleeve in each territory.

As Your Mind Flies By sports a bright blue gatefold cover with the name in bold sans serif font. The inner-spread shows a runway plane with credits and head shots of each member. This was the first credit for designer John Pasche, later known for more risque and startling visuals on albums by the Rolling Stones, Budgie, Hummingbird (We Can’t Go On Meeting Like This), and assorted acts on the Gull label (Arthur Brown, Judas Priest, If, Seventh Wave). 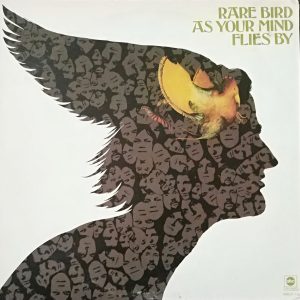 ABC copies come in a single sleeve with a silhouetted wing-headed man, superimposed with a monochrome face collage (multiplied pics of each member) and the same turkey from the earlier Probe release. Spanish copies include the translation Mientras tu Mente Vaga.

“As Your Mind Flies By,” the lengthy first section of the Flight suite, appears on Charisma Keyboards, a 1974 label comp with cuts by Genesis (“The Fountain of Salmacis“), Van Der Graaf Generator (“White Hammer”), Bo Hansson, The Nice, and Robert John Godfrey.

In early 1971, Rare Bird got stymied by the departures of Field and Ashton. Encouraged by Robert Fripp, the organist formed Fields with drummer Andy McCulloch — a recent member of King Crimson (Lizard) — and multi-instrumentalist Alan Barry, formerly of Greg Lake’s pre-KC act the Shy Limbs. They released a self-titled album that year on CBS and recorded a long-vaulted second.

Ashton surfaced in hard-rockers Headstone, which released a pair of 1974/75 albums on EMI. On his own, he released the 1979 album Solo and the 1980 single “Political Madness.” 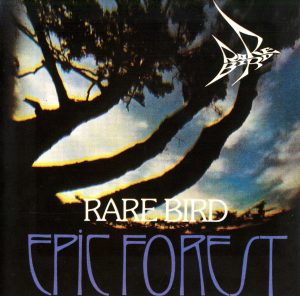 Rare Bird returned with Epic Forest, released in October 1972 on Polydor (UK, US, Germany). The album contains nine originals credited to all five members, including “Turning the Lights Out,” “Title No.1 Again (Birdman),” “Her Darkest Hour,” “Fears of the Night,” and the nine-minute title track.

Rare Bird co-produced Epic Forest with Walham Green player, Paul Holland, a technical hand on 1969–71 albums by Ed Welch, Gerry Lockran, Jasper, and Michel Polnareff. Curtis and Holland co-engineered the album at Lansdowne Studios during June and July 1972. Holland, who plays percussion on two tracks, is pictured along with the five members on the inner-spread. Additional guests include Nic Potter (VDGG) and Paul Korda, who play percussion on “Turning the Lights Out.” Kaffinetti’s arsenal includes electric piano, Hammond and Farfisa organ.

Original UK copies are housed in a gatefold sleeve with a die-cut inner-front (for the single) and a poster-print of The Fairy Feller’s Master-Stroke, an 1860s oil on canvass by English Victorian painter Richard Dadd. The painting, which shows Renaissance revelers in a dense forest, later inspired a namesake song by Queen on their second album.

Stateside, Epic Forest appeared in a single sleeve without the single. Polydor lifted three songs for the US market: “Birdman (Part One)” and “Hey Man” (b/w “Her Darkest Hour”). “Birdman” appears on Polydor Sampler – August ’73, a promo comp with cuts by Mandrill, Buckingham–Nicks, Roy Ayers, and Manfred Mann’s Earth Band.

Also in 1972, Karas collaborated with songwriter Alan Dickinson (Gaslight, The Seychelles) on “You Got a Good Thing,” an Ember/Fontana a-side for the pop-rock harmony quintet Touchwood. Karas left Rare Bird and cut a 1973 solo single, the rustic singalong “Dow-May Line” (b/w “Lorry Lady”), with arranger Graham Preskett on Polydor. In 1975, he joined vaudevillian art-popsters Stackridge for their fourth album, Extravaganza. 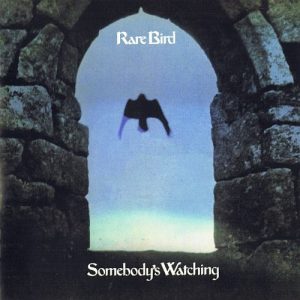 In September 1973, the Rare Bird lineup of Curtis, Gould, Kaffinetti, and Kelly released Somebody’s Watching on Polydor (UK, North America, France, South Africa). Side one contains four group-written originals: “Third Time Around,” “Turn Your Head,” “More and More,” and the title track. The album wraps with the joint-composed epic “Dollars,” which interpolates the theme of “A Few Dollars More” by Ennio Morricone from the soundtrack to the 1965 spaghetti Western For a Few Dollars More starring Clint Eastwood.

Side two also contains three covers. “Who Is the Hero,” originally from the title-sake 1971 album by songwriter Kevin Lamb, who sings backing vocals on Somebody’s Watching along with Korda, who contributed “High in the Morning.” The track “Hard Time” was written by then-Beach Boys Blondie Chaplin and Ricky Fataar, formerly of South African beatsters The Flames.

Though not technically a member, Potter plays bass on all but “Who Is the Hero,” where Gould resumes the instrument. Kaffinetti’s arsenal consists of piano, organ, and Clavinet.

UK and French copies of Somebody’s Watching sport a gatefold sleeve with a vertical inner-spread. The bird-watch and ocean-wave photography is by Chris Yates, who captured similar images for albums by Phillip Goodhand-Tait and Sutherland Brothers & Quiver (Down to Earth). 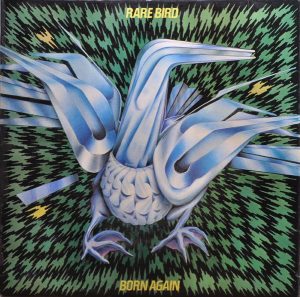 In July 1974, Rare Bird released Born Again on Polydor (UK, US, South Africa). Despite the title, this would be their final album. It sports a single sleeve with a rear group pic that, despite Rae’s membership, shows only three people: the team of Gould, Kaffinetti, and Kelly. The team wrote six of the album’s 10 songs: “Diamonds,” “Reaching You,” “All That I Need,” “Peace of Mind,” the pre-released b-side “Lonely Street,” and the closing epic “Last Tango in Beulah.”

One track, “Harlem,” features writing assistance from Curtis and outsider Levin Camm, who collaborated with Gould on the opening number, “Body and Soul.” Two songs, “Redman” and “Live for Each Other,” have outside origins tied to the band.

The team wrote “Redman” two years earlier with Curtis and one Aaron Hall. The song was first recorded by Capability Brown for their aforementioned From Scratch (which also features their take on “Beautiful Scarlet”). “Live for Each Other” was written by Rare Bird’s ex-drummer Mark Ashton and simultaneously recorded by his current band, Headstone, for their 1974 release Bad Habits, which Gould and Kaffinetti on select tracks.

In May 1975, Rare Bird released one final single: “Don’t Be Afraid” (b/w “Passing Through”), both Gould/Kaffinetti compositions produced by Ken Burgess, a one-time collaborator of Keith West (Tomorrow) and producer of the two Zzebra albums.

Gould formed melodic rockers Runner with ex-Arrows frontman Alan Merrill and the rhythm section of Streetwalkers. Their one album appeared in 1979 on Island. Gould then joined the Alvin Lee Band for the 1980/81 albums Free Fall and RX5.

Kaffinetti joined the stateside soul-funk septet Fresh, which released three albums in 1977/78 on MCA and Prodigal. Working under the name David Kaff, he played the role of Vic Savage, an early member of the fictional metal band Spinal Tap in the 1984 mockumentary film This Is Spinal Tap. He also played keyboards on the accompanying soundtrack.