Ramases was the performance moniker of English folk-psych musician Kimberley Barrington Frost, who cut three singles and two albums with his wife Selket (aka Dorothy Frost.) The singles appeared on CBS and Major Minor between 1968 and 1970 under the name Ramases and Selket.

Their album, Space Hymns, was recorded at Strawberry Studios with backing by future members of 10cc. It appeared in 1971 on Vertigo with cover art by Roger Dean (Yes, Osibisa, Uriah Heep). A second Ramases album, Glass Top Coffin, followed in 1975 on the Vertigo “UFO” label. He took his life the following year after cutting demos for a proposed third album.

Barrington Frost was born on January 1, 1934, in Sheffield, England; the only child of a theatre pianist mother and tenor father. As a teenager, he sang and played guitar and later worked as a jazz club singer. After completing his time in the Royal Air Force, where he served as a physical training instructor, he met and married Dorothy Laflin, the 1957 Felixstowe carnival queen. They ran an HVAC business in Glasgow before resettling in Sheffield in 1966.

Around this time, Barrington Frost shaved his head and donned satin robes. By his own account, he was visited one day by the Egyptian Pharaoh Ramesses (1303–1213 BC), the third monarch of the Nineteenth Dynasty of Egypt, who declared his spirit to be reincarnated through Barrington Frost, who adopted the pharaoh’s name and used music to spread the message. The rechristened Ramases (a misspelling of Ramesses) gave his wife the moniker Selket. 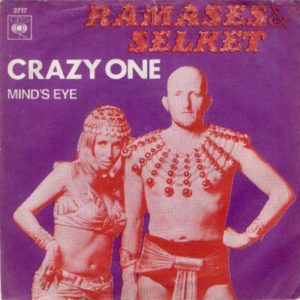 The couple linked with Tremeloes producer Mike Smith for the single “Crazy One” (b/w “Mind’s Eye”), released as Ramases & Selket in October 1968 on UK CBS.

“Crazy One,” a Ramases original, features moderate tribal percussion, overlaid with vibraslap, flute, and strings (in A minor). Selket, in a languid tone, sings lines like “Crazy one, don’t you know that it’s you I journey far to see.” Midway, she pauses for a high-pitched, psychedelic organ solo.

“Mind’s Eye” was co-written by the couple. It features a mid-tempo tribal feel with tabla and rattles; overlaid with fuller strings, billowing oboe, and downer vocals. Its chordal pattern is Am–A7m–D–E. 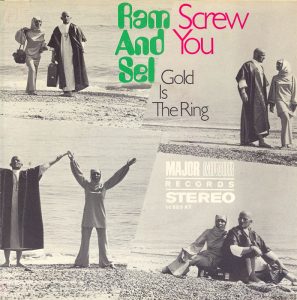 In April 1970, the couple linked with producer Tommy Scott (Them, July) for the single “Love You” (b/w “Gold Is the Ring”), released on Major Minor. For the German market, they redid the a-side as “Screw You.” The German version, issued as Ram and Sel, also appeared in the Netherlands with the sides reversed. Both sides credit Ramases as B. Frost.

“Love You” (aka “Screw You”) is a dirgy, mid-tempo number (in A) with a minimal arrangement (stiff, jittery rhythm section and cricket sounds) and comedic, harmonized vocals, which break for an echoey harpsichord solo.

“Gold Is the Ring” is a faint, harmonized ballad with light piano and tambourine. After Ramases gives a celesta-laden soliloquy, the track assumes of fuller, mid-tempo psych-rock arrangement. 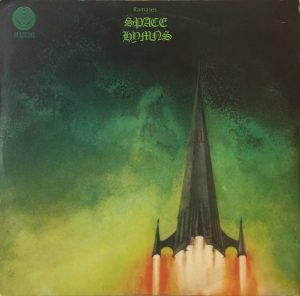 In 1971, music manager Harvey Lisberg introduced the duo — now known simply as Ramases — to one of his main clients, the Mancunian novelty trio Hotlegs, which recently had a No. 2 UK hit with “Neanderthal Man.” The resulting album, Space Hymns, appeared that year on the Vertigo “swirl” label.

Space Hymns opens with “Life Child,” a minimalist guitar–vocal track with a brisk acoustic strum that soon succumbs to a menacing, synthesized tritone figure (G–D–D♭). The album consists of eleven originals, including “Journey to the Inside,” “You’re the Only One Joe,” “Balloon,” and “Molecular Delusion.” The track “Quasar One” is a remake of “Crazy One.”

Ramases and Sel harmonize on Space Hymns but delegate all instrumentation to guitarist–bassist Graham Gouldman and his friends in Hotlegs: drummer Kevin Godley (also credited with flute) and guitarist–keyboardists Eric Stewart and Lol Creme. The four musicians had long overlapped in assorted beat combos before acquiring Strawberry Studios, a state-of-the-art facility in Stockport where Stewart engineered Space Hymns with studio founder Peter Tattersall.

Gouldman — a writer of ’60s hits for the Yardbirds (“For Your Love”) and The Hollies (“Bus Stop”) — subsequently merged with Hotlegs in a new band, 10cc. (Their 1976 fourth album How Dare You! includes an appropriation of the “Life Child” tritone figure on the Gouldman–Godley track “Iceberg.”)

A sitarist named Martin Raphael plays on “Molecular Delusion” and curses over a miscue. Contrary to rumor (and reissue notes), Raphael and Ramases (Barrington Frost) were not the same man. 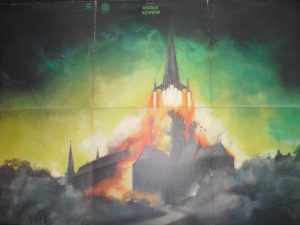 Space Hymns is housed in a six-fold poster cover illustrated by Roger Dean. It shows a rocket ascending into a dark green sky as the fiery emissions set an underlying haunted mansion ablaze. The title is written in green Blackletter typeface. The inner-fold has a purple-tinted infrared photo of the duo waving sticks in the air.

This was an early credit for Dean, who also did 1971 cover illustrations for Assagai, Atomic Rooster, Keith Tippett, Lighthouse, Nucleus (We’ll Talk About It Later), Patto, and the UK Nepentha issue of the 1970 eponymous debut by the Dutch post-psych band Earth and Fire. Dean’s relationship with his most famous client, Yes, started with their November 1971 release Fragile. His work on Space Hymns remained his most elaborate cover apart from the 1973 triple gatefold to Yessongs. 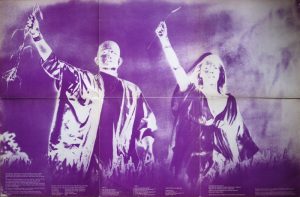