Quiet Sun was an English jazz-rock band from London, initially active circa 1970/71 and briefly reactivated in 1975 by guitarist Phil Manzanera during a break from his main act, Roxy Music. Their singular album, Mainstream, appeared that year on Island/Antilles.

Quiet Sun rose from Pooh & The Ostrich Feathers, formed at Dulwich College in east London by Manzanera and his bassist friend Bill MacCormick.

Manzanera (b. 1951) was born in London but spent most of his youth between Cuba, Hawaii, and the South Americas. Settling back in the UK as a teenager, he funneled his dual love for exotica and domestic rock into music-making. He teamed with MacCormick in a sequence of bands that, by 1970, evolved into Quiet Sun with the arrivals of keyboardist Dave Jarrett and drummer Charles Hayward.

Quiet Sun purveyed the post-psych jazz-rock style of contemporaries Soft Machine and Nucleus. With no recordings to show from this period of activity, they split in 1972 when Manzanera replaced David O’List (ex-Nice) in the newly signed  EG/Island act Roxy Music. MacCormick joined Matching Mole, the post-Softs project of drummer Robert Wyatt. They released two albums that year and planned on making a third, but these plans were stymied by Wyatt’s 1973 paralysis.

In 1973, Manzanera and MacCormick interacted on one track (“Needles In the Camel’s Eye“) on Here Come the Warm Jets, the debut solo album by departed Roxy keyboardist Brian Eno. Around this time, Hayward did a seven-month stint in a touring version of Gong.

In December 1974, when Roxy Music were between their fourth and fifth albums (Country Life and Siren), Manzanera cut his first solo album, Diamond Head. The list of backing players (Eno, Wyatt, Eddie Jobson) includes MacCormick (handclaps on “Miss Shapiro,” vocals on “Alma”) and Hayward (tree bells on “Same Time Next Week”). Both resume their normal roles, along with Jarrett, on “East of Echo,” which lists the trio as “Quiet Sun” and credits MacCormick with “fuzz bass themes.”

Manzanera booked 26 days at Island Studios over the Christmas/New Year’s season for the Diamond Head sessions. With Quiet Sun reassembled in the studio, they used the off-time to record the stockpiled originals from their previous formation. 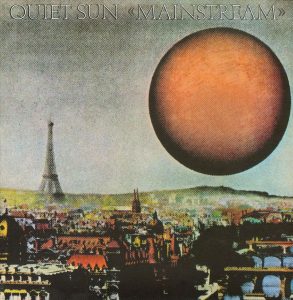 Quiet Sun’s long-awaited singular album, Mainstream, appeared in 1975 on Island (UK, France) and Antilles (US). Manzanera wrote the storming eight-minute album opener “Sol Caliente” and the flipside’s “Trot,” which shifts through fuzz-laden textures, ivory runs, and fractious guitar entanglements. Jarrett composed the second half of side one: “Bargain Classics,” where a jungle jam gives way to a searing windmill of fuzz/Rhodes interplay; and the becalmed, rhythm-less “R.F.D.,” an excursion into Silent Way/Zawinul territory.

MacCormick opens side two with the bursting, meter-shifting “Mummy Was an Asteroid, Daddy Was a Small Non-Stick Kitchen Utensil.” Hayward contributes the percussive miniature “Trumpets with Motherhood” and the spinning, morphing closing epic “Rongwrong,” which marks the first appearance of his distinct vocals, as heard in many subsequent projects.

Mainstream was self-produced by the band with Island engineer Rhett Davies, who worked concurrently on Diamond Head and Eno’s Another Green World, plus the second Fripp/Eno collaboration (Evening Star) and the third album by Camel (The Snow Goose).

After a short round of dates behind Mainstream, Manzanera returned to Roxy Music for their 1975 release Siren and the ensuing tour. His replacement was multi-instrumentalist Charles Bullen, whose experimental approach appealed to Hayward. When Quiet Sun collapsed a short time later, the pair formed This Heat.

MacCormick played on Wyatt’s 1975 release Ruth Is Stranger Than Richard. He reteamed with Manzanera for the 1976/77 releases 801 Live and Listen Now. After appearances on 1977/78 albums by Eno (Before and After Science, Music for Films) and Manzanera’s K-Scope (with Godley & Cream and members of Split Enz), MacCormick formed the post-punk band Random Hold.

801 Live contains live versions of “Rongwrong” and “Mummy Was an Asteroid,” the latter merged with “East of Echo” into the combo piece “East of Asteroid.”

Mainstream was first issued on CD in 1988 on Editions EG and Virgin Japan. In 2011, Manzanera reissued the album on his own label, Expression Records, with two unearthed tracks (“Years of the Quiet Sun,” “Talking History”) and demo versions of “Trot” and “R.F.D.”

In 2008, Manzanera roped in Hayward for the album Firebird V11, which contains first-time recordings of two vintage Quiet Sun pieces, “Fortunately I Had One With Me” and “FIReEBIReD.”

Reggie Lucas
Reggie Lucas (Feb. 25, 1953 — May 19, 2018) was an American jazz-funk guitarist and producer from...
Jack DeJohnette
Jack DeJohnette (born Aug. 9, 1942) is an American avant-jazz/funk drummer, pianist, and composer...
Pacific Eardrum
Pacific Eardrum were a multi-national jazz-funk/soul band that released two albums on Charisma in 19...
Albert Marcœur
Albert Marcœur (born Dec. 12, 1947) is a French musician, composer, and arranger who has been musica...
Eric Kloss
Eric Kloss (born April 3, 1949) is an American jazz saxophonist from Greenville, Penn. Discograp...
Transit Express
Transit Express were a French jazz-rock quartet that released three albums on RCA Victor during the ...
Paul Korda
Paul Korda (1948 – March 11, 2020) was an English singer, songwriter, and producer who issued a stri...
The Artwoods
The Artwoods were an English R&B/beat quintet that was active from 1963 to 1967. The band issued...
Anzen Band
Anzen Band were a Japanese hard-rock/jazz-rock band from Tokyo that released two albums on Bourbo...
Airlord
Airlord were a New Zealander art-rock band from Wellington that released the album Clockwork Rev...
Sherbet
Sherbet were an Australian pop-rock band from Sydney that released five studio albums on Infinity ...
The Sound
The Sound was an English post-punk band from London that released the 1980/81 albums Jeopardy and ...