Pinnacle was an English space-rock band from Liverpool that released the album Assasin on Stag Music in 1974.

Mylett played recorder as a child and took up guitar in senior school. A self-taught musician, he carried his instrument everywhere and played in a sequence of school bands (Grizelda Plum, Jade). His biggest influences included albums by the Jimi Hendrix Experience (Are You Experienced?), Uriah Heep (‘…Very ‘Eavy …Very ‘Umble’), Pink Floyd (Meddle), Deep Purple (In Rock), Emerson Lake & Palmer (first album), and The Who (Who’s Next).

In 1972, he joined Fairytale, which specialized in covers of Cream, Rory Gallagher, Black Sabbath, and Wishbone Ash. After witnessing the virtuosity of their lead guitarist, John Cross, Mylett switched to synthesizer, which prompted them to add Hawkwind and Floyd numbers to their set. They changed their name to Uncle Harry and gigged heavily around Liverpool, where they opened for Judas Priest in the final days of the Cavern club. Uncle Harry split in the spring of 1974 when Cross went to university and Mylett got roped into Pinnacle.

In Pinnacle, Mylett took up songwriting in collaboration with riff-writer Thomas and lyricist McCann. Paul’s sister designed their patchwork denim outfits. They booked time at Abbot Sound Studios in Chester for what would be their singular album. 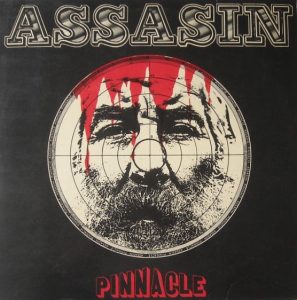 Pinnacle released Assasin in 1974 on Stag Music. It contains eight songs in the 4–5-minute range, including the Mylett original “Time Slips By.” Thomas wrote three numbers (“Cyborg,” “Bad Omen,” “The Ripper”) and co-wrote two with Mylett (“Astral Traveller,” “The Chase”), plus one apiece with Lawrence (“Assasin”) and McCann (“Thumbscrew”). “Astral Traveler” was based on a chord sequence from the Who’s “Baba O’Riley” played backwards.

Assasin was recorded live in the studio apart from the vocals and synth tracks, both recorded separately. Sessions were overseen by Stag’s in-house team of producer Dave Roylance and engineer Mick John. Recordings took place over a two-day weekend with an additional four hours of mixing.

The Assasin cover sports a black/red/off-white scheme with the image of a targeted man, blood dripping from his forehead. Photographer Ken Travers captured the subject: a Liverpudlian tramp named Harry Nesbitt, also known as the “Plinky Plink Man,” who played a cardboard guitar for decades on the local streets. The word “assassin” is misspelled due to a printing error, through the LP labels spell the word correctly in all caps: ASSASSIN.

Assasin is one of a few proper studio albums released on Stag, a short-lived Liverpool label that mostly issued singles by up-and-comers on the mid-’70s Merseyside scene. The label pressed 1,000 copies of the album (HP 12S), which appeared around the same time as another collectible Stag title, Between Music and Madness, the debut album by Supercharge.

Pinnacle toured Assasin into the spring of 1975, by which point McKenna cleared out for drummer Dave Stewart. That March, they opened a triple-bill with Supercharge and Nutz at Liverpool Stadium. By this point, McCann doubled on string machine during live performances. The Stewart lineup cut a live in-studio demo of four new songs: “The Forest,” “Pendulum,” “Parlour Maid,” and “Love Is Lost.”

After Pinnacle folded, the members resigned from the scene apart from Mylett and Thomas, who reteamed in 1976 in the retro ’50s rock quintet Bobby Sox & The Prizeguys. They later played bass and banjo (respectively) in The Hooley’s, an Irish trad group.

Whitesnake
Whitesnake are an English hard-rock band that released seven albums and a live double-LP on UA/Lib...
Lori Lieberman
Lori Lieberman (born Nov. 15, 1951) is an American singer/songwriter who released four 1972–75 alb...
Dan Fogelberg
Dan Fogelberg (Aug. 13, 1951 — Dec. 16, 2007) was an American singer/songwriter from Peoria, Ill. ...
Freeez
Freeez were an English funk band that released three albums and assorted singles on Beggars Banque...
Chemin Blanc
Chemin Blanc were a French folk band that released an eponymous album on RCA in 1976, followed by ...
Burlesque
Burlesque was a comedic English sax-rock quintet that released back-to-back albums on Arista in 1977...
Stevie Wonder
Stevie Wonder is an American R&B musician, vocalist, songwriter, and producer who began recordin...
Eruption
Eruption were an English soul-funk band from London that released three albums on Hansa between 19...
Matthew Fisher
Matthew Fisher is an English keyboardist and composer who played on the first three albums by Procol...
Mandy More
Mandy More (born Sept. 10, 1945) is an English singer/songwriter from Leeds who released the album...
Vic Caesar
Vic Caesar — aka Victor Louis Cesario (born May 27, 1931) — is an American composer and producer ...
Armada
Armada were an English art-rock band that was active through several iterations between 1970 and 1...