The Pharaohs were an American jazz-funk band from Chicago that released the album Awakening on self-press Scarab Records in 1971. They were a conglomeration of local ’60s acts The Jazzmen and the Artistic Heritage Ensemble. Future Earth Wind and Fire mastermind Maurice White was an early member.

At the turn of the 1970s, South Chicago attractions The Jazzmen joined forced with the Artistic Heritage Ensemble. The AHE faction included bassist/trombonist Louis Satterfiel, trombonist Wille Woods, and tubaist Aaron Ifad Dodd. Satterfiel was the most ubiquitous player up to that point, having appeared on albums by Fontella Bass, B.B. King, Phil Upchurch, Brother Jack McDuff, and other artists. In 1970, Satterfiel and Dodd both played on Donny Hathaway‘s debut album Everything Is Everything. 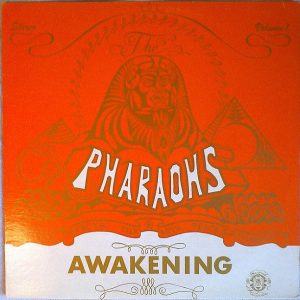 In 1971, The Pharaohs released their debut album Awakening on Chicago small-press Scarab Records. It features seven songs, including “Damballa,” “Freedom Road,” “Black Enuff,” and “Great House.” Production is credited to Great House Prod., Inc. The album features two covers: “Somebody’s Been Sleeping” (originally by 100 Proof (Aged In Soul)) and “Tracks of My Tears.” The song “Is That Black Enough For You?” (a retitled “Black Enuff”) was issued as a single.

The Pharaohs recorded a second album in 1972 but the only track to get released at the time was the 7″ a-side “Love and Happiness.” The full album was ultimately released in 1996 as In the Basement by archivists Luv N’ Haight.

Flutist/percussionist Derf Reklaw Raheem (aka Fred Walker) played on ’70s albums by Jerry Butler, Phil Upchurch, Eddie Harris, Cleveland Eaton, and Ramsey Lewis. During the ’80s, he appeared on albums by Omni and Oasis, the latter reuniting him with Woods.

Satterfiel would have the most active career, playing on albums by artists from the worlds of soul (Terry Callier, The Emotions, Deniece Williams, Heaven & Earth, Keni Burke, Rockie Robbins), funk (The Gap Band, Stargard, Pockets), jazz-funk (Ju-Par Universal Orchestra, Starship Orchestra), pop (Valerie Carter, Phil Collins, Frida Lyngstad), and beyond (Patrick Cowley). From 1975 to 1981, Satterfiel was part of The Phenix Horns (aka the EWF horns). In 1979, he collaborated with Woods and Nalls in the funk combo Sky.