Peter Hammill (born Nov. 5, 1948) is an English singer–songwriter and multi-instrumentalist whose musical career dates back to the late 1960s. He first rose to prominence as the frontman of Van der Graaf Generator, which he co-founded at Manchester University in 1967. Over the next eleven years, he recorded eight studio albums with the band.

In 1971, as Van der Graaf Generator was wrapping its first phase of serious activity, Hammill released his debut solo album, Fool’s Mate. Four further albums appeared between 1973 and 1975 before band activity resumed. After his final split from the band, he resumed his solo career with 1978’s The Future Now. Since that time, he’s released an album at regular 12–18-month intervals.

Renowned as one of rock’s most unmistakable vocalists, Hammill will jump from a taut lower register to high-octave howls and roaring growls in the span of a syllable to emphasize the poignancy, intensity, or immanency of a given line. Musically, Hammill’s solo material has ranged from the subdued, acoustic minimalism of his 1973/74 albums — which feature members of Van der Graaf Generator on select cuts — to the tape-loop experimentation of his 1978–81 output.

He was born Peter Joseph Andrew Hammill on November 5, 1948, in Ealing, West London. He started writing songs at age 12, the year his family relocated to Derby. In 1967, he was a science major at Manchester University when he met musician Chris Judge Smith. The two formed a musical partnership that evolved into the first lineup of Van der Graaf Generator. The band cut a single, disbanded, then regrouped (without Smith) and released eight studio albums between 1969 and 1977.

Their first album, The Aerosol Grey Machine, hears Hammill emerge as a stark vocalist on nine originals, mostly sole-written apart from one interlude and a group-composed number. On the 1970 albums The Least We Can Do Is Wave to Each Other and H to He, Who Am the Only One, he cultivated a bleak, howling tone, delivered in wry metaphors and dark observations of the human psyche. As the group prepared their 1971 magnum opus Pawn Hearts, Hammill released his debut solo album.

Hammill debuted as a solo artist with Fool’s Mate, released in July 1971 on Charisma, Van der Graaf Generator’s label. It features twelve originals in the 2–4-minute range, mostly from the backlog of material written before his time at Manchester Uni. Two tracks, “Imperial Zeppelin” and “Viking,” are Judge Smith co-writes that date from their early partnership. The material ranges from jolly (“Sunshine”) and melodramatic (“Re-Awakening”) to reflective (“Vision”) and stark (“Summer Song (In the Autumn)”).

Sessions took place on April 20–28, 1971, at Trident Studios, between sessions for H to He and Pawn Hearts and Van Der Graaf Generator’s ongoing live commitments. Fool’s Mate was produced by John Anthony and engineered by Robin Cable, the same team working the soundboards on VdGG’s output.

Fool’s Mate features backing by VdGG’s Least We Can Do lineup — keyboardist Hugh Banton, saxophonist David Jackson, drummer Guy Evans, and bassist Nic Potter — on half the tracks, including “Imperial Zeppelin,” “Happy,” “Re-Awakening,” “Sunshine,” and “Child.” (Potter left the band during He to He, but remained in Hammill’s orbit.) The tracks “Candle,” “Solitude,” and “Viking” feature percussionist Martin Pottinger and two members of labelmates Lindisfarne: bassist Rod Clements and harpist–mandolinist Ray Jackson. King Crimson guitarist Robert Fripp, who guests on H to He and Pawn Hearts, plays on “Imperial Zeppelin” and all of side two (apart from “Summer Song”).

Fool’s Mate (a reference to chess and tarots) sports gatefold cover art by painter Paul Whitehead, the artist behind the gatefold visuals on H to He, Pawn Hearts, and the 1970–72 albums by labelmates Genesis: Trespass, Nursery Cryme, and Foxtrot. The Fool’s Mate cover depicts a giant chess board over a barren, sandy landscape. A biplane overhead tows a sign of the name and title. The landscape cuts to a skyline where an open lake, active volcano, sailing ship, and flying zeppelin appear in the distance. On back, the chessboard cuts to a grassy strip where Hammill peeks out from a manhole. The inner-spread shows him at a grand piano with a model vintage biplane at the edge.

Hammill spent the third quarter of 1971 in the studio with Van der Graaf Generator. That October, they hit the road with their fourth album Pawn Hearts, which made them huge stars in Italy, where they toured three times between February and August 1972. By this point, their setlist included unrecorded new numbers, including the epics “(In the) Black Room–The Tower” and “A Louse is Not a Home,” both earmarked for a fifth VdGG album that was set to be recorded in late 1972. However, the demands of Continental fame put a strain on the band, which went on hiatus after the August dates. At this juncture, Hammill avowed his solo ambitions.

1973: Chameleon in the Shadow of the Night 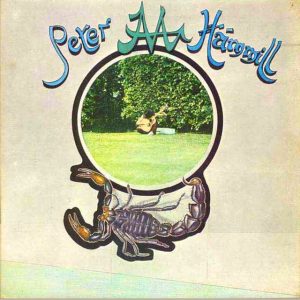 Hammill’s second album, Chameleon in the Shadow of the Night, appeared in May 1973 on Charisma. It features six sparse self-performed originals plus two group-performed numbers: “Rock and Rôle” (with Evans, Jackson, and Potter) and “(In the) Black Room/The Tower,” essentially a Van der Graaf Generator number with Banton, Evans, and Jackson, who also plays on “German Overalls,” “What’s it Worth,” and “Easy to Slip Away,” which also features Potter. At 50:21, Chameleon is longer than any VdGG album up to this point.

“German Overalls” (7:04) offers ruminations on the touring life and its recurrent squalor and boredom. Simple acoustic strum with echoplex vocals. Stream of conscious lines (“Shower-curtain imperative in the presence of acid; Now, feeling placid is death”). Organ passage (4:30) indicates the narrator is losing his grip, due to drugs or diminished mental health (“Cathedrals spiral skywards, I think I’m getting vertigo, I think I don’t know what is real”).

“Slender Threads” (4:57) concerns a once-dear lady named Jenny, who’s now a celebrity. He sees her picture in the Evening Standard and recollects their times together. He wonders if she remembers what they shared, despite their divergent paths. Simple, unaccompanied acoustic strum and double-tracked (self-harmonized) vocals.

On the album’s inner-gates, the players and crew are collectively named The Umbraceous Ensemble: 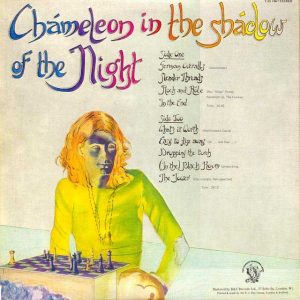 Sessions took place during February and March 1973. Hammill recorded the basic parts at his newly built home studio, Sofa Sound in Worth, Sussex, where he engineered under the pseudonym “Rodney Sofa.” He then took these tapes to Rockfield Studios, a state-of-the-art facility in Monmouthshire, Wales, the site of recent recordings by Budgie, CMU, Foghat, Help Yourself, Home (The Alchemist), and Man (Back Into the Future). Rockfield’s engineer, Pat Moran, hailed from symphonic-rockers Spring, whose 1971 self-titled album is the studio’s earliest recording. Chameleon was mixed at Trident by Anthony and engineer David Hentschel, who both worked on the 1973 debut album by Queen.

Whitehead designed the Chameleon gatefold, which shows the singer seated lotus style on a lawn playing acoustic guitar, viewed from afar through a porthole, circled by a scorpion with Hammill’s forename and surname divided by a crossed M. The back shows a luminous, saturated photo of Hammill at a chess board. The inner-gates show a windblown, cross-armed Hammill standing in a field with lyrics and credits across the grey-sky backdrop.

Hammill started work on his next album in April 1973, prior to Chameleon‘s release. He also wrote English lyrics for the UK Charisma version of Felona e Sorona, the fourth album by Italian symphonic-rockers Le Orme, one of numerous bands spurred by the popularity of VdGG, Genesis, King Crimson, Yes, Jethro Tull, and similar acts in Italy. (Crimson’s original lyricist, Peter Sinfield, did a similar service for Premiata Forneria Marconi on Photos of Ghosts, the English-language remake of their second album Per un Amico.)

1974: The Silent Corner and the Empty Stage 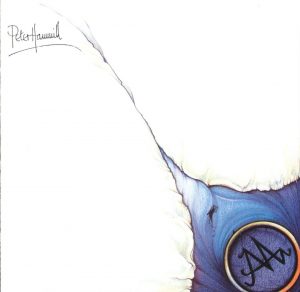 Hammill released his third album, The Silent Corner and the Empty Stage, on February 8, 1974, on Charisma. It follows in the vein of its predecessor with a mix of stripped, self-performed numbers and more elaborate pieces with members of Van der Graaf Generator, including the epic “A Louse is Not a Home,” performed on their mid-1972 shows but recorded the first time here. The Pawn Hearts lineup (Banton, Evans, Jackson) performs on that song as well as “Forsaken Gardens” and “Red Shift,” which also features guitarist Randy California of American West Coast rockers Spirit, who VdGG opened for in 1970. Banton also plays on “The Lie (Bernini’s Saint Theresa).”

Silent Corner sessions started in April 1973, then resumed in September–October. Once again, Hammill laid the basic tracks at Sofa Sound and brought them to Rockfield for enhancements and overdubs with Moran (credited here as Pat Morahan), who also engineered 1974 albums by Ace, Deke Leonard, Headstone (Bad Habits), and Liverpudlian hard-rockers Nutz. Hentschel did the final mix-down at Trident, just after his work on albums by Elton John (Goodbye Yellow Brick Road), Wakeman (The Six Wives of Henry VIII), and Paul McCartney & Wings (Red Rose Speedway). Hammill self-produced this and all subsequent albums.

Bettina Hohls, an erstwhile vocalist for Kraut rockers Ash Ra Temple, designed the Silent Corner gatefold. It shows the crossed M (lower left) encircled in water that flows from a glacial fissure. The back gate depicts a blue Hammill staring up into the fissure. The inner-spread shows an elaborate sequence of corridors with a stairway that climbs to a mouth-like interior. From afar, the image resembles a gaping-mouthed face.

Hammill promoted Silent Corner with a February 1974 tour of the English college and theater circuit. His support act, Be-Bop Deluxe, had just signed to Harvest. Their debut album, Axe Victim, appeared that June.