Peter Banks (1947–2013) was an English rock guitarist who co-founded Yes and played on their first two albums: Yes (1969) and Time and a Word (1970). He then formed Flash, which released the 1972/73 albums Flash, In the Can, and Out of Our Hands on Sovereign. In 1973, he collaborated with Focus guitarist Jan Akkerman on Two Sides of Peter Banks. With his then-wife Sydney Foxx, he formed the US-based Empire, which recorded three albums between 1974 and 1979.

Banks was born Peter William Brockbanks on July 15, 1947, in Chipping Barnet, London, where he took up guitar as a child and banjo as a teenager.

His first band, The Nighthawks, cut a 1964 acetate of “You Better Move On,” originally a 1961 R&B hit for Arthur Alexander. It was backed with one of the earliest versions of the Graham Gouldman composition “For Your Love,” a hit the following year for the Yardbirds.

In 1964, Banks joined The Devil’s Disciples, which specialized in Rolling Stones covers. The following year, he joined The Syndicats as the replacement for guitarist Ray Fenwick, who earlier replaced a young Steve Howe, who would later replace Banks in Yes.

In late 1966, Banks formed The Syn with bassist Chris Squire. They released a pair of pop-psych singles on Deram — “Flowerman” (b/w “14 Hour Technicolour Dream”), “Created by Clive” (b/w “Grounded”) — and became a fixture of the Summer of Love, playing high-profile shows at the Marque Club opposite Jimi Hendrix, Pink Floyd, and The Moody Blues.

In late 1967, Banks joined The Neat Change, which issued the 1968 Decca single “I Lied To Auntie May” (b/w “Sandman”). The a-side was written by Andy Bown and Peter Frampton, then of The Herd.

In mid-1968, Banks and Squire formed Mabel Greer’s Toyshop, where they were gradually joined by singer Jon Anderson, drummer Bill Bruford, and keyboardist Tony Kaye. By late 1968, they morphed into Yes and singed to Atlantic.

On their 1969 self-titled debut, Banks’ fretwork incorporates jazzy chords and legato licks on “I See You” and fugue-like staccato figures on “Survival.” He advanced these techniques on Time and a Word, Yes’ 1970 sophomore effort with the showpieces “Astral Traveller” and “The Prophet.” The counterpoint between his runs and Squire’s melodic, busy bass patterns helped initiate the age of contrapuntal arrangements in rock.

Despite these musical achievements, Banks felt marginalized during sessions for Time and a Word. In particular, he objected to Anderson and Squire’s decision to add strings on select tracks. Under debated circumstances, Banks left Yes in April 1970, three months prior to the album’s release.

That fall, Banks joined Blodwyn Pig for a string of September–October dates with Aardvark, Supertramp, and Wishbone Ash. He also played on two tracks (“Mama,” “Crying to Be Heard”) on the 1970 album Nice to Meet Miss Christine by singer Christine Harwood.

In 1971, Banks formed Flash with bassist Ray Bennett, drummer Mike Hough, and singer Colin Carter. They signed with Capitol/Sovereign and released the 1972 albums Flash and In the Can, each comprised of three lengthy epics and two shorter pieces, mostly composed by Bennett or Banks/Carter. An edit of their nine-minute opus “Small Beginnings” hit #29 on the Billboard Hot 100.

To outsiders, it appeared that Flash was a haven for aggrieved ex-Yes members, as Kaye — who left Yes after their third release, The Yes Album — also appears on Flash. Despite an invite to join the band, Kaye declined, surfacing instead in Badger with guitarist Brian Parrish: the other partner of bassist Paul Gurvitz, best known for group projects with his guitarist/brother Adrian Gurvitz (Gun, Three Man Army).

During 1972, as Flash toured behind its two albums, Banks befriended guitarist Jan Akkerman of the Dutch band Focus. They recorded pieces for a collaborative project with help from Bennett and Hough just as Flash prepared a third album. 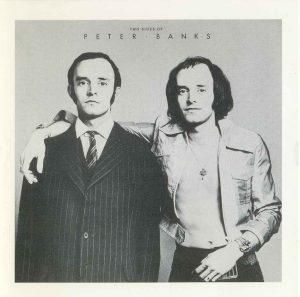 In August 1973, Sovereign released Two Sides of Peter Banks in the US. The albums is all instrumental and consists of lead guitar dueling between Banks and Akkerman, backed on most tracks by Flash bassist Ray Bennett and Genesis drummer Phil Collins.

Side one contains three short Banks/Akkerman co-writes, including the bookends “Vision of the King” and “Last Eclipse,” both echoey, serene cuts in the ECM vein. The other, “Battles,” is a dizzying jazz-rocker that presages Collin’s work with Brand X. Akkerman’s electric guitar work is panned to the left channel.

The bulk of side one goes to a pair of two-part Banks suites: The White House Vale (“On the Hill” / “Lord of the Dragon”) and Knights (“The Falcon” / “The Bear”), the latter with Flash drummer Mike Hough.

Akkerman himself composed “Beyond the Loneliest Sea,” three minutes of classical guitar filigree that opens side two. The remainder consists of two Banks/Akkerman jams: the lengthy, fluid “Stop That!” and the boogiefied “Get Out of My Fridge.”

Aside from the two Banks suites, the only track without Akkerman is “Knights (Reprise),” recorded with King Crimson bassist John Wetton (credited here as “John Whetton”) and Genesis guitarist Steve Hackett. Banks’ “Knights” compositions have no relation to “Man of Honour (Knight),” one of Bennett’s compositions on the concurrent Flash album Out of Our Hands.

Stateside, Capitol issued Two Sides of Peter Banks and Out of Our Hands at the same time on the Sovereign imprint. To promote the former, they released the latter under the name Flash Featuring England’s Peter Banks. In the UK, where Out of Our Hands was issued as a normal Flash album, his solo album was simply titled Peter Banks with a black-framed cover.

The album comes in a gatefold sleeve with a cover pic of Banks as two versions of himself: conservative and hipster. The chill, hipster self (shaggy hair, open jacket) has his arm around the uptight, pinstripe-suited iteration. The back features profile pics of his two participating Flash bandmates and studio performance shots of the other four.

The inner-spread shows his open guitar case littered with assorted sundries, including an electric razor, an empty Coke can, an unopened Heinz can, a 1971 Melody Maker yearbook, an issue of Phonograph Record Magazine with Flash on the cover, and a picture of Banks with his partner, Sidonie Jordan.