Pete Brown & Piblokto! were an English post-psych band that released two albums on Harvest in 1970: Things May Come and Things May Go, but the Art School Dance Goes on Forever and Thousands on a Raft. Brown fronted the Battered Ornaments on their first of two 1969 albums and served as lyricist for Jack Bruce during and after Cream.

Brown formed Piblokto in late 1969, immediately after breaking from his prior band, the Battered Ornaments. The original Piblokto featured guitarist Jim Mullen, bassist Roger Bunn, and organist Dave Thompson. (The word “piblokto” refers to a wintertime condition among the Inuit tribes of Greenland, characterized by bouts of shrieking, crying and other disturbing behaviors.)

One year earlier, Brown teamed with guitarist Chris Spedding in the Battered Ornaments for the 1969 Harvest release A Meal You Can Shake Hands With in the Dark, issued as Pete Brown & the Battered Ornaments. Upon completion of a followup, Brown left that band under debated circumstances (Spedding re-did the vocals on the resulting album, Mantle-Piece). Earlier, Brown formed a songwriting partnership with Cream bassist Jack Bruce. They co-wrote numerous Cream numbers (“I Feel Free,” “White Room“) and collaborated on Bruce’s 1969 debut solo album Songs for a Tailor.

Mullen (b. 1945, Glasgow) started out as a bassist, inspired by jazz and skiffle. He worked as a journalist and moonlighted in a band with future members of the Average White Band. His act opened for Brown’s in Glasgow and the two exchanged numbers. This marked the start of a long recording career for the now-guitarist.

Bunn (b. 1942) gigged with numerous dance bands, blues combos, and jazz groups, including the Blue Notes and the Spontaneous Music Ensemble. His composition “Life is a Circus” was demoed in 1968 by a then-unknown David Bowie. 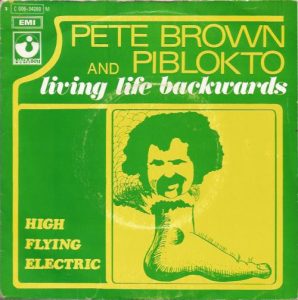 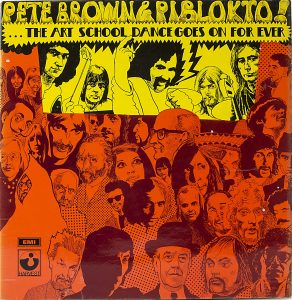 Piblokto’s first album, Things May Come and Things May Go, but the Art School Dance Goes on Forever, appeared in April 1970 on Harvest (UK, Italy, France), Odeon (Japan), and Electrola Gesellschaft m.b.H. (Germany). It contains the aforementioned b-side and eight new songs, including three Brown solo compositions: “Someone Like You,” “Firesong,” and the speeding title track.

Brown co-wrote two songs with Mullen (“High Flying Electric Bird,” “Golden Country Kingdom”) and one with Bunn (“Country Morning”). “Walk For Charity, Run For Money” was composed by all three. Two songs (“Then I Must Go and Can I Keep,” “My Love’s Gone Far Away”) are Brown/Spedding co-writes from the Mantle-Piece era.

Brown produced and engineered Things May Come. Original copies are housed in a gatefold sleeve designed by Mal Dean, also responsible for the artwork on A Meal You Can Shake. The outer-fold shows the yellow nameplate and group illustration above an orange-tinted collage of faces, including Pablo Picasso, Salvador Dali, Arthur Brown, Syd Barrett, and John Entwistle. The inner-spread shows the band and credits (right) and a comic strip comprised of 41-panels, each with incriminating use of the word “piblokto.” 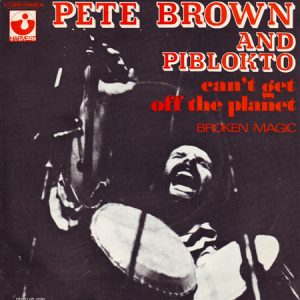 The original release of Things May Come (cat# 1C 062-04 291) appeared just ahead of titles by labelmates The Greatest Show on Earth, the Edgar Broughton Band, The Pretty Things, and Pink Floyd. In France, Harvest paired “Walk for Charity, Run For Money” and “Then I Must Go and Can I Keep” onto a 7″.

Thousands on a Raft 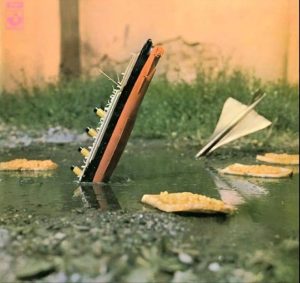 Piblokto’s second album, Thousands on a Raft, appeared that October. It features three songs per side, five composed by Brown/Mullen, including “Station Song Platform Two,” “Got a Letter From a Computer,” and the 12-minute two-part epic “If They Could Only See Me Now.” Mullen composed the 17-minute “Highland Song,” which contains a lengthy jam section. The opening track, “Aeroplane Head Woman,” is a riff-laden rocker about the widow of a Battle of Britain Spitfire pilot.

Thousands on a Raft was self-produced at Spot Productions Studios with budding engineer John Hudson, who subsequently worked with Leaf Hound and Juliet Lawson. The cover, another Mal Dean design, shows a miniature Titanic replica in a pond, stern-raised in the famous (yet fictional) intact sinking pose. 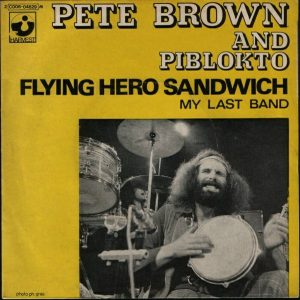 Mullen embarked on a three-album, 1971/72 stint with Brian Auger’s Oblivion. He joined the post-Thompson Vinegar Joe for their second album, Rock’n Roll Gypsies. In 1975, he joined funk-rockers Kokomo for their first album. Also that decade, he played on albums by Robert Palmer, Annette Peacock, and the Average White Band. In 1977, he formed a jazz-funk duo with ex-IF saxophonist Dick Morrissey.

Tait played on the 1971 Charisma release Bell + Arc, a reunion of Skip Bifferty alumni. Concurrently, he played on A Passing Stranger, the debut solo album by ex-Dada vocalist Paul Korda. Along with Thompson, he played on the debut album of Dada-spinoff Vinegar Joe. He also appears on A Story Ended, the 1972 album by Colosseum saxist Dick Heckstall-Smith. In 1974, he played on a BBC Studios session with Gong that later appeared on Live Etc.

Weathers played on the 1971 albums We Put Our Magick On You by Graham Bond With Magick and Bluebell Wood by Big Sleep, an outgrowth of Eyes of Blue. He then joined Gentle Giant as their permanent drummer, starting with their 1972 fourth album Octopus. Along with fellow EoB and late-period Piblokto members Ryan and Williams, Weathers played on the 1974 album Black Hole Star by The Neutrons, an offshoot of Man.

Brown teamed with Bond for the 1972 album Two Heads Are Better Than One and soundtrack music for the 1973 film Maltamour. He continued his Bruce association with lyrical credits on Harmony Row, Out of the Storm, and the three albums by super-trio West Bruce & Laing. Brown also co-wrote four songs on A Story Ended and recorded the 1973 poetry album The “Not Forgotten” Association with select backing by reedist Jack Lancaster (Blodwyn Pig, Aviator), pianist Max Middleton (Jeff Beck Group, Hummingbird), and trumpeter Henry Lowther.

In 1976, Brown formed Back to the Front with flutist/keyboardist Ian Lynn and singer Jill Saward (ex-Fusion Orchestra) for the album Party in The Rain, released in 1982 on one-press Discs International. After the 1977 release How’s Tricks with the Jack Bruce Band, Brown turned to script writing.

Things May Come and Thousands on a Raft have been reissued multiple times on CD and LP. In 2001, BGO Records paired both titles with the three non-album singles and further material onto a 34-song, two-CD set.