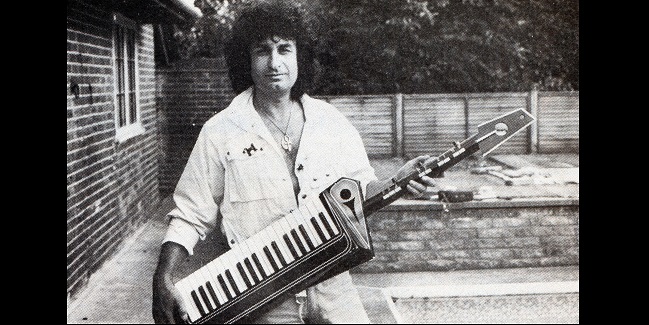 Patrick Moraz (born June 24, 1948) is a Swiss keyboardist and composer who has been musically active since the late 1960s, playing in the bands Mainhorse, Refugee, and Yes between 1969 and 1975. In 1976, he debuted as a solo artist with the album The Story of i on Atlantic. He has released more than 15 albums on Charisma and other labels in the years since, including two duo releases with drummer Bill Bruford. In 1978, he began a 13-year stint in the Moody Blues, replacing the band’s original keyboardist Mike Pinder.

He was born Patrick Philippe Moraz on a plane en route to Morges, Switzerland, on June 24, 1948. His father once worked for Polish pianist and composer Ignacy Jan Paderewski. As a child, Moraz played the violin, piano, and percussion. He studied jazz and classical music till age 13, when a skating accident left him with four broken fingers. Through concentration and practice, he regained his skills and became ambidextrous.

At sixteen, Moraz became the youngest player to win the Best Soloist award at the Zurich jazz festival. He continued to win awards at the festival as a soloist and jazz-band player for the next five years. In 1964, he spent time at the Portlligat home of Salvador Dalí, where he performed for guests. At seventeen, Moraz apprenticed under French-Italian jazz violinist Stéphane Grappelli and performed in several African nations. When his jazz band triumphed at the 1965 Zurich jazz festival, they were invited on a European tour with American saxophonist John Coltrane.

In 1969, Moraz settled in England, having overcome previous opposition from the UK musician’s union. Looking to form an organ-psych combo, he enlisted bassist/singer Jean Ristori, drummer Bryson Graham, and singer/guitarist Peter Lockett. As Mainhorse, they released a self-titled album on Polydor in 1971, followed by a standalone single for the French drama film La Salamandre.

After Mainhorse split, Moraz toured Japan and Hong Kong as the musical director of a Brazilian ballet. He then composed soundtrack music for the 1973 Swiss comedy The Invitation and the 1974 French romantic-drama The Middle of the World.

In late 1973, Moraz got a call from bassist/singer Lee Jackson, formerly of The Nice and the recently disbanded Jackson Heights. He wished to reform The Nice with Moraz in lieu of keyboardist Keith Emerson, who was now occupied in the mega-successful Emerson, Lake & Palmer. With Nice drummer Brian Davison, they formed Refugee and recorded a self-titled album in February 1974. Released on Charisma, it contains three five-minute songs and two multi-movement suites composed almost entirely by Moraz.

Refugee practiced intensively and toured behind the album. However, Moraz got a call that August to join Yes as the replacement for keyboardist Rick Wakeman. Moraz auditioned for the band on equipment left behind by Greek keyboardist Vangelis, who they’d recently summoned for a tryout. Yes did an in-studio rendition of its newly formed piece “Sound Chaser,” then asked Moraz to add a part. On the spot, Moraz came up with a keyboard intro that ended up on the completed album, Relayer, released in late 1974.

Moraz toured as a member of Yes into mid-1975, when the band took a break to let its members record solo albums.