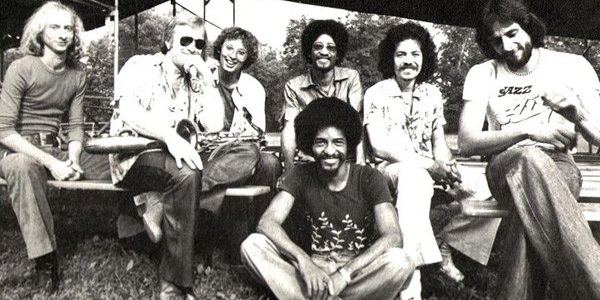 Passport are a German jazz-rock band led by saxophonist, keyboardist, and composer Klaus Doldinger, whose surname has been affixed to the nameplate on select releases.

Passport was formed in 1971 by saxophonist Klaus Doldinger (b. 1936), a then-18-year veteran of the Berlin jazz scene.

During the 1950s, he played in The Feetwarmers (a local Dixieland-styled band) and Oscar’s Trio (inspired by Oscar Peterson). His earliest album credit is the 1962 Brunswick release Rolf Kühn feat. Klaus Doldinger, recorded that October with clarinetist Rolf Kühn. Doldinger issued four titles on Philips between 1963 and 1967, including the 1964 all-star release Jazz Goes Baroque with George Gruntz and Klaus Weiss.

In 1969, Doldinger embraced electified jazz on the Liberty releases Valentin Mehler’s Herbstplatte ’69 and The Ambassador. That same year, he formed the psych-jazz Motherhood with bassist Lothar Meid and drummer Udo Lindenberg. They issued two albums: I Feel So Free (1969, UA) and Motherhood (1970, Liberty).

Concurrently, Lindenberg played on albums by Niagara and Free Orbit. As Passport was getting underway, he drummed on the first album by brass-rockers Emergency and debuted as a solo artist with the 1971 Telefunken release Lindenberg.

The initial lineup of Passport featured Doldinger, Meid, and Lindenberg along with saxophonist Olaf Kübler and American organist Jimmy Jackson. The Pittsburgh native had recently played on albums by Tangerine Dream (Electronic Meditation), Mal Waldron (The Call), and the eponymous release by free-psychsters Haboob. Under the alias Tabarin Man, Jackson also played on Embryo’s Rache, the 1971 sophomore release by Embryo.