Pan was a Danish psych-rock band that released a self-titled album and standalone single on Sonet in 1970.

Lelièvre (b. October 1, 1942) settled in Denmark after deserting the French army. In 1965, he formed a folk trio with singer Maia Aarskov and English singer/guitarist Cy Nicklin (later of Culpeper’s Orchard). They cut two 1966/67 albums as Cy, Maia & Robert. He then formed the duo Robert & Iain with Scottish bassist/singer Iain Campbell. Their one album, Alliance, appeared on Metronome in 1968. Just prior to Pan, he cut a 1969 folk-psych single, “J’ai Vu Ton Visage” (b/w “Dis-Toi Bien”), produced by ex-Yardbirds/Blossom Toes manager Giorgio Gomelsky and released on Marmalade (as Le Lièvre).

Würgler was an early member of Burnin Red Ivanhoe and played on their 1969 debut double-album M 144. The brothers played on the 1969 self-titled album by Danish blues-rock mainstays the Delta Blues Band. Keyboardist Henning Verner completed the first lineup of Pan. 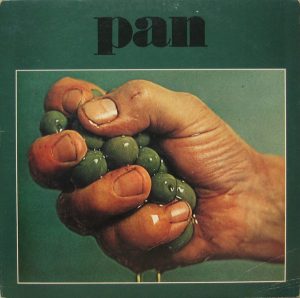 Pan recorded their singular album at Wifos Studio in Copenhagen during February and March 1970. The finished product appeared that May on Sonet. It features 10 numbers: eight proper songs plus two miniatures that bookend side A. Half the cuts exceed five minutes, including “Tristesse,” “Lady of the Sand,” and “Il N’y a Pas si Longtemps de Ca.” Lelièvre wrote all the words and music except on “If,” which features lyrics by one Mic Hannant.

Original copies of Pan are housed in an olive green gatefold with a cover photo (olive squeezing) by Sonet handyman Poul Bruun, who also did album visuals for Alrune Rod, Gasolin’, Hurdy Gurdy, and the aforementioned Burnin Red Ivanhoe and Rainbow Band.

Also in 1970, Pan issued the non-album single “In a Simple Way” (b/w “Right Across My Bed”). Lelièvre co-wrote the b-side with singer/guitarist Niels Skousen, an associate of the Young Flowers who soon surfaced in Skousen & Ingemann and the group Musikpatruljen.

Skousen sat in on Pan for an earlier session (January 1970) at Radiohuset, Copenhagen, that produced three Lelièvre originals (“Far Away From Home,” “Freedom,” “Time”) not recorded at Wifos. A fourth track from the Radiohuset session (“From a Tree”) is another Lelièvre/Skousen co-write. All four tracks, plus two newer songs recorded that July (“Deliverance,” “If I Was Another Man”), are compiled with one traditional (“I Cannot Keep From Crying”) and a Woodie Guthrie cover (“I Ain’t Got No Home (Ramblin’ Man)”) on the 2004 archival disc Pan on the Air – Danish Radio Sessions 1970, released on Karma Music.

Just prior to their split, Pan performed four songs on Danmarks Radio in May 1971: “Eternally,” “Such a Hard Way,” “Don’t You Know,” and a short rendition of “Tristesse (Mon Ami).”

Würgler formed Blast Furnace, which issued a self-titled album on Polydor in 1971. During the ensuing five years, he released four albums with politi-rockers Agitpop. In 1974, he debuted as a solo artist with the album Frispark on Demos.

Thomas Puggaard-Müller cut a 1971 album in the folk combo Square Dansk. In 1977, he joined a regrouped Culpeper’s Orchard for their fourth album All Dressed Up and Nowhere to Go, released as Culpeper.

Michael Puggaard-Müller formed My Ship, which released the album Morning Song on BASF in 1972. Both brothers guested on the 1974 Metronome release Kom Ind by folk rockers Hvalsøspillemændene.

Lelièvre cut a 1971 solo album that was vaulted for commercial reasons. After a promise of amnesty by the French government, he returned to his home country, where he was promptly jailed despite what they said. Upon his release, he returned to Denmark where, disillusioned and traumatized, he took his own life on August 26, 1973, five weeks short of his 31st birthday.

In 1993, German archivists Little Wing of Refugees reissued Pan on vinyl in an altered, etched cover. The album got its first CD pressing in 2004 by Russian bootleggers Second Life. This disc includes seven bonus tracks: the 1970 single, the 1971 radio performance, plus an alternate (longer) version of “To Get Along Alone.” The 17-track version has since been twice-issued on the Tømrerclaus-headed archival label Karma Music.