Pacific Drift was an English art-pop/psych band from Manchester that released the album Feelin’ Free on Deram in 1970. 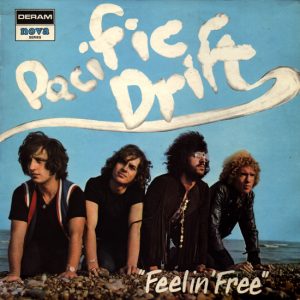 Pacific Drift hit the studio in late 1969 and released its singular album, Feelin’ Free, on Deram in January 1970. Original UK and French pressings include 11 songs, nine of them written/co-written by Reynolds, including “Plaster Coster’s USA,” “God Has Given Me,” “Tomorrow Morning Brings,” the title-track, and the lengthier cuts “Greta the Legend” and “Happy Days.” The album’s centerpiece, “Norman,” is a group-written number. Arendes co-wrote seven songs, including “Garden of Love,” co-written with Lancaster. Despite his early departure, Lancaster plays flute on select passages.

Feelin’ Free was part of Deram’s short-lived Nova series (1969–70) along with titles by Galliard, Bulldog Breed, Ashkan, Egg, Aardvark, and Hunter Muskett. The album was produced by Wayne Bickerton (Toby Twirl, Granny’s Intentions, The Flirtations, Focal Point, Dana Gillespie) and engineered by R. Wilkinson. The cover shows the band washed ashore under their skywritten nameplate. The back shows the silhouetted members standing before a ship, apparently run ashore. The credits are all handwritten.

In the US, Feelin’ Free was issued on London Records with an altered running order comprised of 12 tracks, dropping “Going Slow” and “God Has Given Me” and adding “Yes You Do,” “We’re On Our Way,” and “Don’t Turn Away.” In the UK, “Yes You Do,” was issued as the b-side to Pacific Drift’s non-album cover of “Water Woman,” written by Jay Ferguson and originally recorded by Spirit on their 1968 debut album.

After Pacific Drift, Reynolds briefly joined Blodwyn Pig just as it morphed into the Mick Abrahams Band. In 1971, he covered the Cat Stevens song “Wild World,” released in Italy on Clan Celentano ‎(b/w the Guess Who cover “Share the Land“). He then issued four original sides: the 1974 RAK single “Outsider’s Point of View” (b/w “Hold Me Down”) and the 1975 Epic single “The World Wasn’t Ready” (b/w “Tables and Chairs”), the latter produced by Dan Loggins (Kenny‘s brother).

In 1979, Reynolds started a working relationship with Marianne Faithfull, for whom he wrote and backed on the albums Broken English, Dangerous Acquaintances, A Child’s Adventure, and Blazing Away. During the early 1980s, he also played on albums by Grace Jones, Cristina, Black Uhuru, Valerie Lagrange, Joe Cocker, John Martyn, Charlélie Couture, and Sly & Robbie. He released one final solo single, the Dan Hicks cover “I Scare Myself” (b/w the original “Till the Doctor Gets Back“) on Island in 1982.

Feelin’ Free was first reissued on CD in 2006 by European archivists Sunrise and Mason. In 2009, it was reissued again on Grapefruit Records, this time as a disc of their complete recordings (the UK/US album tracks plus all non-album sides).

Lindisfarne
Lindisfarne was an English folk-rock band from Newcastle upon Tyne that released four albums and a...
The Savage Rose
The Savage Rose are a Danish art-rock/psych band from København, formed in 1967. The band's initia...
Tranquility
Tranquility were an English rustic-rock/folk band that released two albums on Epic between 1972 an...
Vision
Vision were an English synthpop band from Rotherham, South Yorkshire, formed in 1981 as Spiral Vis...
Henry Badowski
Henry Badowski (born Oct. 3, 1958) is an English New Wave/synthpop songwriter and multi-instrument...