Ora was an English folk-pop band that released a self-titled album on small-press Tangerine Records in 1969. Mastermind Jamie Rubinstein later founded Byzantium, which issued two albums on A&M in 1972/73.

Ora coalesced at UCS Hampstead when members of two student bands formed a trio. Guitarist and singer/songwriter Jamie Rubentstein first played in The Faction with drummer Julian Diggle. Months later, they joined the band Sophie with Robin Sylvester, who played bass, guitar, and keyboards. The three formed Ora as a vehicle for Rubentstein’s material.

Soon enough, Ora caught the attention of Tangerine Records boss Don White, who invited them to KPM Studios cut two demos, “Deborah” and “Fly.” As sessions commenced for an album, Ora swelled to a four-piece with guitarist Jon Weiss, a friend of Sylvester’s. Rubentstein took a holiday to contemplate the finishing touches, only to return and find (to his chagrin) that the album had already gone to press. 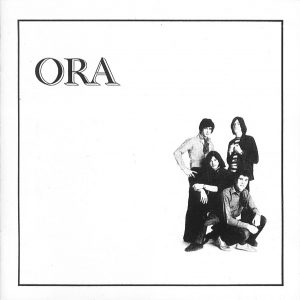 Ora’s self-titled album appeared in July 1969 on Tangerine. It features 12 Rubentstein originals, including “Seashore,” “About You,” “You,” “Emma’s Saga,” “Venetia II,” “The Seagull and the Sailor,” and the aforementioned demo cuts. All songs are in the 2–3-minute range apart from the 6:28 “Whitch.”

Rubentstein arranged the material with Rubentstein, who handles bass, piano, and organ. The album sports a plain white sleeve with a small group photo (same on the front and back). 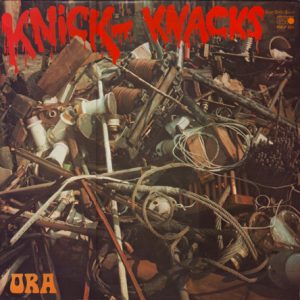 In 1970, the German Metronome label issued the album as Knick-Knacks with new cover art: a heap of machine parts with the title in red dripping candle letters.

Rubinstein and Weiss promoted Ora with an appearance on DJ Johnnie Walker’s Saturday afternoon show on BBC Radio 1. They performed several songs, including “Seashore,” with the rhythm section of up-and-comers Wishbone Ash: bassist Martin Turner and drummer Steve Upton. After a subsequent series of sessions that yielded no vinyl, Ora disbanded.

Rubentstein took a position at Shell, but soon got back into music after befriending guitarist/singer Nico Ramsden. The two eventually formed Byzantium with guitarist, singer, and songwriter Chaz Jankel.

Diggle enrolled at Cambridge University and resurfaced in The Movies, which made five albums between 1975 and 1981. During that time and the years that followed, he also played on albums by Andy Fairweather Low, Ali Thomson, Joan Armatrading, Marianne Faithfull, Dana Gillespie, Murray Head, and Sniff ‘n’ the Tears, plus one track (“Misunderstood”) on Rough Mix, the 1977 collaborative effort by Pete Townshend and ex-Small Faces bassist Ronnie Lane.

Ora got its first CD reissue in 1993 by UK archivists Background, which also resurrected titles by Forever Amber, Pussy, Sindelfingen, Gygafo, and Agincourt / Ithaca. The album has since been reissued as a two-disc set on LP (Wah Wah Records, Spain, 2006) and CD (Prog Temple, UK, 2016). The second disc includes leftovers from the Ora sessions (“Ooo,” “Pomme”), plus early versions of “What Is Happening” and “I Am a Stranger to My Life,” both redone for the first Byzantium album.