Odin was an English-European hard-rock/psych band based in Gaukönigshofen, Bayern, Germany, that released a self-titled album on Vertigo in 1972.

Odin was formed in 1971 by German keyboardist and percussionist Jeff Beer, Dutch guitarist Rob Terstall, and the English rhythm section of Ray Brown (bass) and Stuart Fordham (drums). While veering between the home bases of Beer and the latter pair, the band found its most receptive audience in Germany. 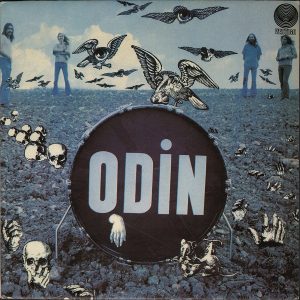 Odin was released in 1972 on the Vertigo “swirl” label. The self-produced album begins with the epic “Life Is Only” (10:50) and proceeds through three shorter cuts: the Zappa ode “Tribute to Frank,” the wordless cowbell rocker “Turnpike Lane,” and the acoustic/harmonized “Be the Man You Are.” On side two, the Mancini-esque “Eucalyptus” is bookended by two lengthy numbers: “Gemini” and “Clown.” The former is a Steve Hammond composition recorded earlier by Eric Burdon & the Animals and Quatermass. Of the band originals, Beer wrote/co-wrote four cuts; Terstall wrote/co-wrote two. Musically, the tracklist ranges from thunderous organ opuses in the Purple/Rooster/Heep vein to woodsy moments akin to Byzantium.

In February 1973, Odin cut an SWF session that was released 34 years after the fact by French/German archivists Long Hair. It features live renditions of the Odin tracks “Eucalyptus” and “Life Is Only” and covers of Zappa’s “King Kong” and “Oh No.” The disc also includes a 1971 live recording of the Hammond-penned “Make Up Your Mind,” heard earlier on Quatermass.

Beer played on the 1973 release Circle by singer/songwriter Andy Marx. In 1980, Beer and Terstall popped up on the avant-garde jazz release Traumspiel by composer/bandleader Herbert F. Bairy.

Odin was first reissued in 1991 by German archivists Repertoire Records. Since 2000, it has been re-pressed multiple times on the specialty labels Living in the Past, Akarma, and Long Hair.