Oberon was an English folk-psych band that self-released the album A Midsummer’s Night Dream in 1971.

Smith and Seaward were classmates and showgoers with a shared affinity for English folk music (Pentangle, Fairport Convention, Incredible String Band). Independently, Smith listened to Debussy and Faure; Seaward to Nick Drake, Leo Kottke, and It’s a Beautiful Day. Seaward, an aspiring composer, wrote the score for a school adaptation of Arthur Miller’s Death of a Salesman.

Smedley grew up in a musical Northampton family. As a child, he was taught violin by his father, a classical player. As the psychedelic years advanced, he fused his classical interests with a newfound penchant for current rock acts (The Who, Jimi Hendrix, Jethro Tull, King Crimson). He played in a school band with (later Gigymen) drummer Alex Cooper.

Birchall started as a pianist and studied classical music at Radley College in Oxfordshire. Like Smedley, he fused these interests with post-psych rock (Pink Floyd, Emerson Lake & Palmer).

Clutterbuck came from an army family that was constantly on the move. Like Birchall, he sang in church choirs from the age of eight.

They assembled as Oberon when Smith and Seaward, who played in a blues-rock covers band, invited housemate Powell and music chums Clutterbuck and Smedley. As things finalized, they added Scrimgeour and Birchall, who switched from piano to bass a fortnight prior to their first recording session. His presence allowed Lupton, the initial bassist, to work the sidelines.

Oberon took their name from the king of the fairies in Shakespeare’s A Midsummer’s Night Dream, suitably the title of their singular album. 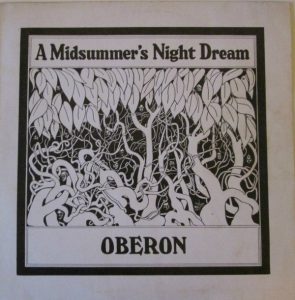 Oberon self-released A Midsummer’s Night Dream in a quantity of 99 copies in 1971. On side one, the traditional “Nottanum Town” and Debussy’s “Syrinx” bookend two originals: Smith’s “Peggy” and the eight-minute Seaward/Lupton epic “The Hunt.” Side two contains a cover of the Gershwin standard “Summertime,” Smith’s “Time Past, Time Come,” and two Seaward/Lupton numbers: the epic “Minas Tirith” and “Epitaph.”

Smith recorded 4-track reel-to-reel music, described as “noodly electric/acoustic” by Powell, who heard the unreleased tapes. They met up in later years before Smith’s death from undisclosed health issues.

Seaward wrote jingles and worked with The Lost Jockey, a modern classical ensemble that released an album in 1982 on Les Disques du Crépuscule. He then joined Man Jumping, an ethno-jazz-dance septet that released the album Jumpcut on Bill Nelson‘s Cocteau Records in 1984.

Smedley graduated with a BA in Fine Arts from the University of East Anglia in 1973. While working for the BBC, he built a double-neck bass/guitar, which he used in a trio for the Kenneth Williams radio show. He then teamed with university classmate Brian Bowles in the Bowles Brothers Band, a retro hot-jazz/western swing combo that busked the London Underground. After their 1978 album Roger Buys a Fridge, Smedley moved to Bellingham, Washington, where he taught violin. Later, he moved to San Francisco and joined the Clubfoot Orchestra.

Birchall attended Durham University and performed musique concréte. He worked as an engineer at BBC Radio and composed for the Radiophonic Workshop. From 1976 onward, he directed and served as bass vocalist in The Demon Barbers, a vocal cabaret group. Their one disc, A Close Shave, appeared on ASV in 1994.

Pocket-Size
Pocket-Size were a Danish psych-rock band that recorded an album's worth of material circa 1970. ...
Freddie Hubbard
Freddie Hubbard (April 7, 1938 — Dec. 27, 2008) was an American jazz trumpeter from Indianapolis. ...
Vice Versa
Vice Versa were an English coldwave combo from Sheffield that released a four-song EP and a casset...
Stray
Stray was an English hard-rock band from London that released five albums on Transatlantic Records...
Cowboys International
Cowboys International were an English New Wave/synthpop band that released the album The Original ...