Nirvana was an English orchestral-pop duo comprised of Patrick Campbell-Lyons and Alex Spyropoulos. They debuted with the 1967 rock opera, The Story of Simon Simopath, recorded with the four-piece Nirvana Ensemble. After their 1968 psych hit “Rainbow Chaser,” they released All of Us and the string-laden opus Dedicated to Markos III. Campbell-Lyons continued the name for the 1971/72 albums Local Anaesthetic and Songs of Love and Praise.

Campbell-Lyons (b. 1943, Lismore, Ireland) settled in West London at the outset of the beat era. He joined The Second Thoughts, an R&B/beat sextet with future record producer Chris Thomas, Thunderclap Newman drummer Speedy Keen, and the team behind Jade Warrior, musicians Jon Field and Tony Duhig. During a year-long residency in Sweden, they cut four songs that later appeared on the archival EP Seventh Son.

In 1966, Campbell-Lyons and Thomas cut two singles as Hat and Tie: “California Jazz Club U.S.A.” and “Bread to Spend,” both on President Records.

Island Records co-founder Chris Blackwell included Nirvana in a round of signings (Art, Traffic) designed to connect his label — long associated with Caribbean music — with the new psychedelic underground.

Nirvana released their first two singles in the summer of 1967. For the first, they teamed with Muff Winwood (Spencer Davis Group) and Island’s in-house producer Jimmy Miller.

June 14, 1967
A. “Tiny Goddess” (3:36) A slow number marked by harpsichord and booming timpani with stings that slither (verse) and strike (bridge) over a maudlin four-note descent (F–Em–Dm–C). Written by Campbell-Lyons, Spyropoulos, and Singer.
B. “I Believe In Magic” (3:25) Trippy midtempo song with pizzicato strings and a two-chord piano pattern (Dm–G) with an angular vocal melody that hits an augmented third (tritone) over G (C#). Alarming chorus line (“I got something I keep to myself”) over a stately, closed-cadence cello structure (C–Am–Dm–G) and tantalizing refrain (“and I’m not going to tell you what it is”) over sparkling chimes. 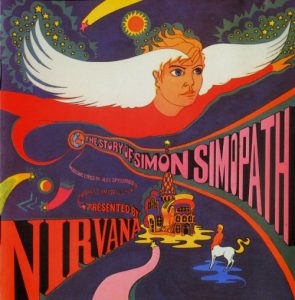 Nirvana released their debut album, The Story of Simon Simopath, in October 1967 on Island (UK), Fontana (Germany), and Canada (Stone Records). It contains 10 originals by Campbell-Lyons and Spyropoulos, all linked by a plot concerning the titular character. The album averages 12 minutes per side (subtitled Act One and Act Two), each with five songs in the 2–3 minute range.

The songs follow the odyssey of Simon, a boy who wishes to grow wings and fly. His sister tells him that when he falls in love, his wish will come true (“Wings of Love”). At school, he withdraws into his fantasy and disengages from his peers (“Lonely Boy”). He enters adulthood with the same obsession. Unfulfilled, he suffers a nervous breakdown and gets institutionalized. Despite the claims of others in the hospital (“We Can Help You”), no one can. Once out, he applies for an intergalactic test and gets chosen to be a “Supersonic Jockey.” Happy to realize his dream, he feels like a king “In the Courtyard of Stars.”

While in space, Simon befriends Cedric the Centaur and finds that “He Was Just the One” to keep him company. Cedric leads Simon to a nirvana where the young man encounters the “Pentecost Hotel,” where he meets the lovely Magdelena. Smitten and elated, as he “Had Never Found a Love Like This Before,” he drinks the wine of eternal living. They wed before the Minister of Dreams, who says “Take This Hand” and proclaims them King and Queen of the lost paradise. It all happens in a remote, far-off place in a distant time (“1999”).

The Story of Simon Simopath is one of the earliest pop albums where all the songs are tied to a central plot, predating concept albums and “rock operas” by the Moody Blues (Days of Future Passed), The Twilights (Once Upon a Twilight…), Small Faces (Ogdens’ Nut Gone Flake), The Pretty Things (SF Sorrow), The Who (Tommy), and The Kinks (Arthur).

Blackwell produced The Story of Simon Simopath just prior to his work on Supernatural Fairy Tales. The engineer, Brian Humphries, earned his first credit on this release. He subsequently worked on Traffic and the 1968/69 Kinks concept albums We Are the Village Green Preservation Society and Arthur. Dale arranged the strings, played by the Nirvana Ensemble.

The Story of Simon Simopath sports a cartoon-style sleeve illustration by graphic designer David Browning. It shows Simon with head wings flying through space. Typographic ribbons with the name and title wind in and out of planet Earth. Below, Cedric the Centaur stands in the nirvana before the Pentecost Hotel.

On the back cover, Campbell-Lyons and Spyropoulos stand among the Nirvana Ensemble, effectively misrepresenting Nirvana as a six-piece band. In Australia, the album appeared as Pentecost Hotel on Festival Records with the six-piece group photo on the front cover. 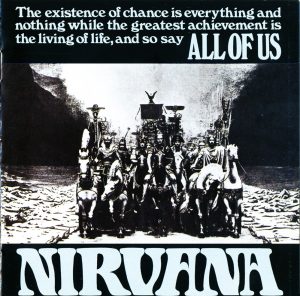 In March 1968, Nirvana released their third single, the psychedelic “Rainbow Chaser,” one of the first recordings with phasing from start to finish. It topped the Danish Singles Chart. The b-side, “Flashbulb,” is an uptempo piano boogie number forwarded by a throbbing bassline.

Nirvana mimed “Rainbow Chaser” on French television with Salvador Dalí, who splashed black paint on the members and their instruments. As sessions continued for their second album, Campbell-Lyons and Spyropoulos dispensed with the Nirvana Ensemble, citing touring costs.

Their second album, All of Us, appeared in August 1968 on Island (UK), Festival (Australia), Fontana (South Africa), and Bell Records (US). It opens with “Rainbow Chaser” and contains 11 further Campbell-Lyons/Spyropoulos originals, including “Miami Masquerade,” “The Show Must Go On,” “You Can Try It,” “St. John’s Wood Affair,” and “Frankie the Great.” Also included is their debut a-side from the prior year, “Tiny Goddess,” despite its ties to the Magdelena sequence in the Simon Simopath story.

Side two opens with “The Girl In the Park,” a jaunty cut issued the same month as Nirvana’s fourth single, backed with the non-album “C Side In Ocho Rios,” an instrumental version of “In the Courtyard of the Stars.” 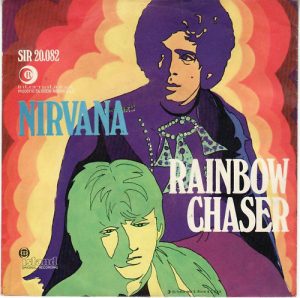 In November, Island lifted “The Touchables (All of Us)” as the album’s third single: titled “All of Us (The Touchables).” The song bookends the 1968 20th Century Fox release Original Motion Picture Sound Track Album “The Touchables”, which also has cuts by Ferris Wheel and Wynder K. Frog.

On its front cover, All of Us features a monochrome reproduction of Les Conquérants (The Conquerors), an 1892 work by French painter Pierre Fritel. It shows famous historical leaders, armored on horseback, riding forth on a trail lined with naked cadavers. The album’s title is the last three words of a proverb: The Existence of Chance Is Everything and Nothing While the Greatest Achievement Is the Living of Life, and so Say ALL OF US. Humphries produced and engineered the album.

In January 1969, Island reached back to Simon Simopath for Nirvana’s sixth single, “Wings of Love,” where a sequence of tempo shifts animate the young man’s excitement. The non-album b-side, “Requiem to John Coltrane,” is an instrumental mix of soul-jazz organ and psychedelic sound collage.

Campbell-Lyons reunited with his Second Thoughts colleague Chris Thomas for Nirvana’s May 1969 single “Oh! What a Performance,” a soul-pop rave-up with an ascending riff that pauses for the refrain “I want an Oscar for playing a fool.” Its b-side, “Darling Darlane,” is a jolly singalong built on organ, piano, bass, and vocalized refrains. This was an early production credit by Thomas, who rose to prominence in late 1968 as the co-producer on The Beatles, aka “The White Album” by The Beatles. 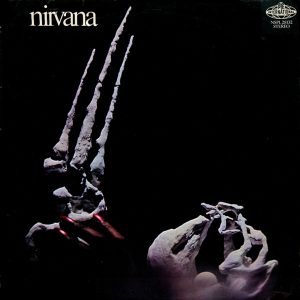 Nirvana recorded their third album under the working title Black Flower. The material — a combination of English baroque pop and West Coast sunshine pop (ala Curt Boettcher) — was vetoed by Blackwell, who likened it to the work of French soundtrack composer Francis Lai (A Man and a Woman).

Pye stepped in and issued the album in August 1970 as Dedicated to Markos III, named after a monied uncle of Spyropoulos who financed the recording. It features 10 numbers of soft, sweeping pop, including “I Talk To My Room”, “It Happened Two Sundays Ago”, “Black Flower”, and “Excerpt from the Blind and the Beautiful.” The penultimate track, “Love Suite,” is six minutes of light, swinging jazz-pop with vocals by Lesley Duncan.

Pye International paired “The World Is Cold Without You” and “Christopher Lucifer.” However, the album got deleted after an initial pressing of only 250 copies. Months earlier, the album appeared in Italy and the US on Metromedia Records, which also issued it in Japan with a translated title (ニュー・フォーク・サウンド).

Behind the console, Campbell-Lyons produced 1970 albums by Aquila, a brass-rock spin-off of Blonde on Blonde; and recent Vertigo signees Clear Blue Sky. As a Vertigo talent scout, Campbell-Lyons was instrumental in getting Assagai and Jade Warrior signed to the label. He and Spyropoulos also recorded incognito as Sunbird on the Philips single “Brother Bird” (b/w “Love of the Free”).

Later that year, Spyropoulos parted from Campbell-Lyons, who collaborated with Patrick Joseph Kelly on the single “Take the Barriers Down,” released in September 1970 on Polydor under the name Pica. Its b-side, “Insurance Man,” is a solo-write by Campbell-Lyons, who produced both sides. Two months later, he and Kelly commenced work on a 16-minute track at Island Studios. 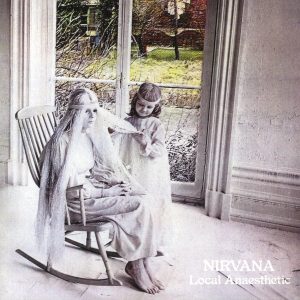 Campbell-Lyons continued Nirvana alone with Local Anaesthetic, released in 1971 on Vertigo (UK, Germany, Australia, Japan). Side one consists of “Modus Operandi (Method of Work),” the Kelly collaboration that starts as an organ/sax free-form piece and shifts through multiple styles (Afro-rock, boogie, blues rock), then settles into a fuzz-laden jam before ending as a piano ballad. Side two is devoted to Campbell-Lyons’ “Home,” a 19-minute suite in five parts: “Salutation,””Construction,” “Destruction,” “Re-Construction,” and “Fanfare.”

Campbell-Lyons produced the album at Island Studios with engineer Roger Beale, a tech hand on 1970/71 titles by artists on Island (Amazing Blondel, Spooky Tooth), Vertigo (Clear Blue Sky), and B & C (Hannibal, Keith Christmas). Despite the scant credit info, Campbell-Lyons states in the liner notes that Local Anaesthetic “is not a solo effort.” He thanks “Jade Warrior, Sunbird, Mrs Kelly, Jeremy Barlow, Mother and Dave, Mel Collins, Glenn and Nicky.”

Local Anaesthetic, is housed in a gatefold cover that shows a deathly scenario with a white-clad, frosty skinned woman and girl in an unfurnished white living room. Campbell-Lyons looks in through the window on this ghostly scene. On the inner-gate, his back is turned on the now-empty room. The image was designed by Vertigo’s in-house artist Keith MacMillan (aka Keef), who also designed 1970/71 covers for Affinity, Beggars Opera, Black Sabbath, Colosseum, Fresh Maggots, Manfred Mann Chapter Three, Raw Material, and Tonton Macoute.

As a producer, Campbell-Lyons worked on 1971 Vertigo titles by Mike Absalom and Dr. Z (Three Parts to My Soul (Spiritus, Manes et Umbra)). 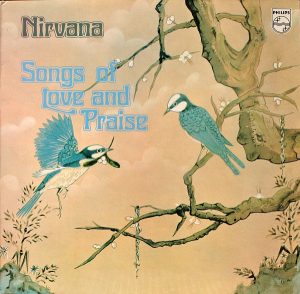 In 1972, Campbell-Lyons released Songs of Love and Praise, his final album of the period as Nirvana. It features nine songs, mostly in the 2–4-minute range, including “On the Road” and “Please Believe Me.” Each side begins with a remade oldie: “Rainbow Chaser” and “Pentecost Hotel.” The lengthier “Stadium” closes the album. “Will There Be Me” was composed by one Cas Thomas. Otherwise, Campbell-Lyons lone-wrote the non-remakes.

Patrick Campbell-Lyons went solo with the 1973 album Me and My Friend, issued on EMI’s short-lived Sovereign imprint (Flash, Mouse, Public Foot the Roman, Renaissance). During the mid-’70s, he issued singles under the names Patrick O’Magick, Rock O’Doodle, and Tails. In 1978, he released an album of jigs and reels titled Ireland on the library label Bruton Music.

His second proper solo album, The Electric Plough, appeared in 1981 on Public Records. In North America, it appeared re-sequenced as The Hero I Might Have Been. The synth-rock title track, issued as a Harvest single under the name Erehwon, reunited him with Spyropoulos.

They reunited again in 1985 for a European tour. In 1987, archivists Bam-Caruso released Black Flower, a compilation with three unreleased 1967 tracks: “Life Ain’t Easy,” “We Can Make It Through,” and “June.” Amid renewed popularity, Nirvana issued the 1994 demos and rarities comp Secret Theatre, followed by the 1996 collection of unreleased material Orange and Blue.