New Love Ltd was an American soul trio that sang on the 1978 album So Much to Talk About (Tudo Bem), recorded in São Paulo with funk sextet Interstate 95 and released on Brazilian small-press Giant Records. Two of the singers partook in the subsequent Ingram offshoot Philly Cream.

Dunston partook in the soul group Voltaire’s, co-writing their 1968 a-side “Movin’ Movin’ On” for Philly small-press Bacone Records. That same year, under the name Bobbie Dee, he cut the single “My Life Is So Lonely” (b/w “I Don’t Love You”), issued on the Detroit label Marquee Records. He also co-wrote “‘Gone’! The Promises of Yesterday,” a 1971 orchestral soul-psych single by Volt quartet The Mad Lads. Another co-write, “World That’s Not Real,” is the b-side to “Deep Inside You,” a 1973 single by soul singer Gloria Taylor.

In 1974, Dunston joined 24 Carat Black for their vaulted second album (released in 2009 as Gone: The Promises of Yesterday, which lists his surname as “Dunson”). As Robert (or Bobbie) Manchurian, he arranged tracks on 1976/77 albums by The Supremes, Melvin “Wah Wah” Watson, Patti Labelle, The Originals, and Eloise Laws.

In 1977, New Love Ltd cut the single “One Man at a Time” (b/w “Universal Funk”) for Interlove Productions. It was recorded at Bobio Records & Sound Studio and issued on three-press Arco. Lipford sings lead on the a-side, a ballad co-written by gospel singer Nancy Butts (of the Butts Sisters) and singer/producer Jackie Avery, who himself issued two prior singles (including the 1970 Capricorn release “Love Is Bigger Than Baseball.”)

In 1978, the two parties convened at Estudios Reunidos in São Paulo to record So Much to Talk About (Tudo Bem), released that year on the elusive Brazilian label Giant Records.

So Much to Talk About (Tudo Bem) 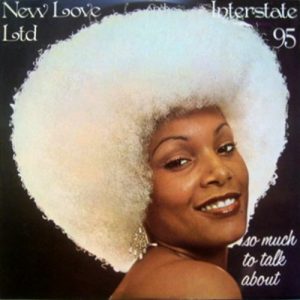 The album features nine songs, including both numbers from the 1977 single. Despite the credits on that earlier release, every song here is credited to songwriter Samuel Wilson (Mighty Ryeders). The tracks were arranged by Wilson Mauro (Os Originais do Samba) and produced by one Pedrinho Jr. with assistance by Helio Urbano. Engineer Ely Bontempo also handled contemporary albums by Luis Vagner, Bebeto, Paulo Freire, Pau Brasil, Lady Zu, and Nelson Ayres.

The exuberant title-track, a Philly disco tune in Cmaj, sports piping sax and flowering strings over a brisk hi-hat slide. Its harmonized refrain, “tudo bem,” is Portuguese for “okay.” Track two, “Come My Way,” starts quietly with ivory glissandos that abruptly cut to a galloping prestissimo, punctuated by staccato bass and piano. They hold that pace through the next-two tracks: the emotively sung hi-hat slider “Love Slave” and the unrelenting wah-wah windmill “Funking Long.”

Side two slows pace for two impassioned Lipford spotlights: the emotional “One Man at a Time,” where she gives her lover an ultimatum over a long-resolving, string-enhanced melody; and the spiritual “Somebody Bigger Than You and I.” The album wraps to the jet-engine sounds and alien chatter of “Universal Funk.”

Returning stateside, Bailey and Lipford sang on the 1980 album No Time Like Now by Philly Cream, a soul-funk project involving the Ingram family and guitarist Anthony Middleton (Fat Larry’s Band). Bailey later reunited with Dunston (Dunson) to sing backup on the 1983 synth-funk release Heavy Vibes by the Montana Orchestra.

As Robert Manchurian, Dunston did orchestral arrangements on We Meet Again, the 1978 solo album by Martha Reeves. During the early 1980s, he oversaw recordings by Eddie Kendricks, Willie Johnson, and The Tams.

In 2015, So Much to Talk About (Tudo Bem) was reissued by European bootleggers Funky Planet along with titles by Black Merda, Tomorrow’s People, and Rick Mason and Rare Feelings.