National Health was an English avant-jazz/rock band from Canterbury that released a self-titled album on Affinity in 1978, followed that same year by Of Queues and Cures on parent-label Charly.

The project halted at decade’s end due to Stewart’s involvement with Bruford, but was resurrected in 1982 for the album D.S. al Coda, recorded as a tribute to their fallen friend and former bandmate Alan Gowen.

Miller and Stewart hailed from Hatfield and the North, which had just released its second album, The Rotter’s Club. Before that, Miller recorded one album with soul-rockers Delivery and two with the Soft Machine-spinoff Matching Mole. Stewart cut three prior albums with Egg and one with Arzachel (both with Campbell) and also played in psych-rockers Khan.

Bruford was fresh off his first three-album stint with King Crimson, which followed his five-album run with Yes. Gowen played in the Canterbury combo Gilgamesh, which had just released its self-titled debut album.

National Health, named after Stewart’s National Health Service (NHS) spectacles, recorded an album’s worth of material in 1975/76, but couldn’t secure a deal with Virgin, despite Stewart’s relationship with the label. (The material from these sessions, including six pieces by Campbell, was later released on the 1996 Voiceprint CD Missing Pieces.)

In 1976, Bruford left for an abortive super-trio with former bandmates Rick Wakeman (from Yes) and John Wetton (from King Crimson). Bruford and Wetton then formed U.K. with guitarist Allan Holdsworth and keyboardist Eddie Jobson. National Health hired drummer Pip Pyle, another alumnus of Hatfield and Delivery. 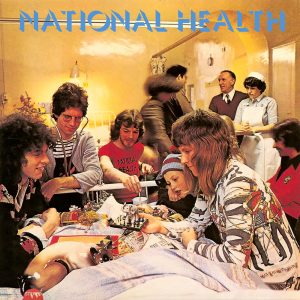 National Health released their self-titled debut album in February 1978 on Affinity, the jazz-subsidiary of oldies label Charly. Stewart composed the opening epic “Tenemos Roads” (14:43) and the two “Borogoves” pieces, parenthetically identified as “Excerpt From Part Two” and “Part One” (in that order). All three feature Stewart on Clavinet and guest clarinetist Jimmy Hastings, brother of Caravan singer Pye Hastings. Gowan contributed “Brujo” and collaborated with Stewart on “Elephants” (14:37), which contains a recap of “Tenemos Roads.”

National Health was self-produced during February–March 1977 at Mobile Mobile, a transportable studio located at a pig farm (the Point) in an ex-mortuary near Victoria Station, London. The studio, owned by Jon Anderson, was also the recording site of 1977 albums by Hugh Hopper (Hopper Tunity Box) and Mirage, a jazz-rock combo with guitarist Brian Godding (Blossom Toes, Centipede, Magma).

The intro to “Elephants” was recorded live at the M.L.T.S. in Tiel, Holland, on February 14, 1977. Guest percussionist John Mitchell (Mike Westbrook Orchestra) plays sundries on everything but that track. Gowan had technically left the band at this point but sat in on the sessions. Amanda Parsons, one of three Northettes (Hatfield’s female backing singers), vocalizes on four tracks.

Photographer Laurie Lewis designed the cover to National Health, which shows the band using a hospital bed as a lunch and chess table (front) and the members seated in a dim nightclub as hospital staff and a child patient mime on the band’s instruments. Lewis also designed the cover visuals to the two Hatfield albums.

Between the recording and release of National Health, Stewart played on Feels Good to Me, the debut album by Bruford, featuring Bill Bruford and Holdsworth, the jazz-rock-oriented half of the super-group U.K., which had yet to make its first album. Feels Good, recorded in August 1977, beat National Health to the shops by one month.

The eleven-month delay between the completion and release of National Health was due in part to the band’s unexpected rejection by Virgin Records, which had housed Hatfield and like-minded artists (Comus, Faust, Henry Cow, Robert Wyatt). Virgin’s change of heart was down to a shift in focus; the label had steered to reggae (I Roy, Keith Hudson, Peter Tosh) and hard-rock/pop (Boxer, Mallard, Supercharge, Yellow Dog) in the 12 months preceding its embrace of the new wave.

Of Queues and Cures 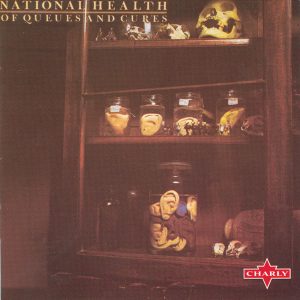 National Health released their second album, Of Queues and Cures, in December 1978 on Charly. Stewart bookends the album with parts one and two of “The Bryden 2-Step (For Amphibians),” spearheaded by a modulating riff with searing leads and alternating counts of three. Select passages feature Henry Cow sidewoman Georgie Born (cello) and Westbrook brass players Phil Minton (trumpet) and Paul Nieman (trombone).

Georgie also plays on Greaves’ “Squarer for Maud” alongside Jimmy Hastings and oboist Keith Thompson (of the early music ensemble City Waites). The latter two play on Pyle’s “Binoculars” with Minton and Nieman. Additional guests include bassist Rick Biddulph, who plays during the 6/8 organ solo on Miller’s “Dreams Wide Awake;” and Trinidadian pannist Selwyn Baptiste, who appears on Stewart’s “The Calypso.” Blegvad voices Greaves’ piece while Greaves himself voices Pyle’s.

Sessions took place once again at Mobile Mobile, this time located at Ridge Farm near Dorking, Surrey. Of Queues and Cures was recorded during July 1978 with Dunne and Gaylor, who subsequently co-engineered titles by Hillage and post-punks The Pop Group.

Of Queues and Cures sports a cover designed by Jill Mumford (Planxty, The Bothy Band) with a photograph by Brian Rule that shows a cold wooden cabinet with figurines, skulls, and jarred ears. Lewis took the group shot on back, which shows the Greaves lineup seated at a restaurant table where the once-hirsute Stewart appears to have taken style cues from Elvis Costello. Mumford also did 1978/79 visuals on albums and singles by The Jam (All Mod Cons), the Skids, and XTC (Drums and Wires).

Stewart immersed himself in Bruford, whose two stars had broken from the U.K. camp. They made the 1979/80 albums One of a Kind and Gradually Going Tornado, plus the live release The Bruford Tapes, the last two featuring Holdsworth’s replacement in the band, guitarist John Clark. Gowan took Stewart’s place in National Health for a round of 1979 live activity.

Pyle replaced ex-Mirage drummer Dave Sheen in Soft Head, a jazz-rock band with Gowan and Soft Machine alumni Hopper and Elton Dean. His arrival prompted a name modification to Soft Heap (“Heap” derived from the forename initials of each member: Hopper, Elton, Alan, and Pip). In 1979, they released a self-titled album on Charly.

In 1980, Stewart and Pyle formed Rapid Eye Movement, which toured France but never made any recordings. The following year, Stewart played on the final City Boy album (It’s Personal) and teamed with ex-Zombies singer Colin Blunstone for a synthpop version of “What Becomes of the Brokenhearted,” a Motown classic originally recorded by Jimmy Ruffin. Its chart success (UK #13) prompted Stewart and ex-Northette Barbara Gaskin to cut another updated oldie, “It’s My Party,” a 1963 hit by American singer Lesley Gore. Their version topped the UK Singles Chart for four weeks in the autumn of 1981. Pyle backed the duo on this and subsequent recordings.

Greaves appeared on the 1981 Rough Trade release The Sound of the Sand and Other Songs of the Pedestrian, the solo debut of Pere Ubu singer Dave Thomas with his revolving-door backing band The Pedestrians. Greaves then signed with the French-American label Europa for the 1982 release Accident, his debut solo album.

Miller summoned ex-Hatfield bassist Richard Sinclair for the album Before a Word Is Said, recorded in April–May 1981 with Gowan and Gilgamesh drummer Trevor Tomkin. The album, released under the full names of all four players, appeared on Europa in 1982.

Sessions for Before a Word Is Said wrapped one week before Gowan’s death from leukemia on May 17, 1981, at age 33. His passing prompted National Health to reunite in the studio to make an album of his unrecorded compositions. 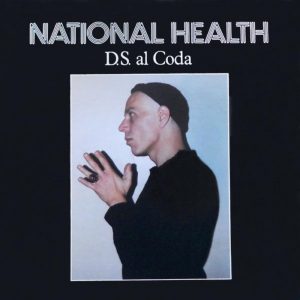 National Health released their third and final studio album, D.S. Al Coda, in 1982 on two-press Lounging Records. It features nine compositions by Alan Gowan, seven written between 1979 and 1981 (post-Gilgamesh), including “I Feel a Night Coming On,” “Flanagan’s People,” “Portrait of a Shrinking Man,” “Black Hat,” and “Toad of Toad Hall.” The album also contains two Gilgamesh covers: “Arriving Twice,” originally on that band’s 1975 release Gilgamesh; and “TNTFX,” from their 1978 second album Another Fine Tune You’ve Got Me Into.

Musical guests include Jimmy Hastings (flute on three of the non-covers) and Sinclair, who sings on “Black Hat,” effectively making that track a full-fledged Hatfield reunion. Amanda and Barbara sing on “Tales of a Damson Knight.” The opener, “Portrait of a Shrinking Man,” features brass by Dean (saxello), Ted Emmett (trumpet), and Annie Whitehead (trombone).

Emmett — along with Amanda, Barbara, and Stewart — also played on the 1982 release Silesia by Jakko Jakszyk, the guitarist in Rapid Eye Movement. (Emmett and Jakko also played in 64 Spoons, an unsigned early ’80s act whose mix of Canterbury-style jazz-rock and post-punk was later documented on the archival CD Landing On a Rat Column.)

D.S. Al Coda was one of two albums released on Lounging, established by Welsh musician Charlie Summers for the 1982 release Dogged By Dogma, a 1982 jazz-rock album released under the name The Ghoulies but recorded by two different studio groupings, one including Pyle and Stewart. In the US and France, Coda appeared on Europa.

Dave Stewart continued his partnership with Barbara Gaskin with a string of singles, including covers of Marty Wilde (“Johnny Rocco”) and Thomas Dolby (“Leipzig”). (Dolby appears as Johnny in their video to “It’s My Party.”) Rykodisc compiled their work on the 1986 comp Up From the Dark.

Dave and Barbara also appear on Neil’s Heavy Concept Album by actor/comedian Nigel Planner, performed as his hippie character Neil from the BBC Two sitcom The Young Ones. The album features covers of Caravan (“Golf Girl”), Donovan (“Hurdy Gurdy Man”), the Incredible String Band (“A Very Cellular Song”), the Sex Pistols (“No Future (God Save The Queen)”), Tomorrow (“My White Bicycle”), and Traffic (“Hole In My Shoe”).

Along with Jakko, the Blegvad’s, and percussionist Anton Fier (The Feelies, Lounge Lizards, Golden Palominos), Greaves formed The Lodge, which issued the 1988 album Smell of a Friend on Antilles New Directions. (Jakko’s concurrent project for the label, Dizrhythmia, features Stewart on the track “Katy Goes to School” alongside Cochise guitarist BJ Cole.) In 1991, Greaves and Flying Lizards mastermind David Cunningam cut a collaborative ambient/vocal disc.

In 1996, the CD Missing Pieces appeared on Voiceprint (UK) and Eastside Digital (US). It features twelve professionally recorded tracks by National Health circa 1976, including six composed by Campbell: “Paracelsus,” “Agrippa,” “Zabaglione,” “Croquette for Electronic Beating Group,” “Starlight On Seaweed,” and the miniature “Bourée,” all dropped from their set after his exit from the band. Most of those, plus the Stewart compositions “Clocks and Clouds” and “The Lethargy Shuffle & the Mind-Your-Backs Tango” (9:19), feature the group’s earliest lineup with Bruford, Gowan (who contributed “The Towplane & the Glider”), and guitarist Phil Lee (Gilgamesh, Paz).

An archival live disc, Playtime, appeared in 2001 on Cuneiform. It captures National Health on two dates during 1979 with Gowan back after Stewart’s departure. The disc features early performances of the Greaves/Blegvad “Rose Sob” (later recorded for Accidents) and Miller’s “Nowadays a Silhouette” (later heard on Before a Word Is Said). The unearthed numbers include Gowan’s “Flanagan’s People” (15:57) and Pyle’s “Pleaides” (10:26).

The Selecter
The Selecter was an English two-tone/ska band from Coventry that debuted with a self-titled theme ...
Avtograf
Автограф (Avtograf) were a Russian symphonic/hard-rock band formed in Moscow in 1979. The band rec...
Dee D. Jackson
Dee D. Jackson — aka Deirdre Elaine Cozier (July 15, 1954) — is an English singer from Oxford who ...
Raices
Raices was a Puerto Rican Latin-jazz/rock band that released a self-titled album on Nemperor in 19...
Blackjack
Blackjack were an American hard-rock band from New York that released two albums on Polydor in 19...