The National Head Band was an English blues-psych band that released the album Albert 1 on Warner Bros. in 1971.

After they secured a deal with Warner, the National Head Band added a second drummer, Lee Kerslake, at the label’s insistence. Kerslake hailed from psych-rockers The Gods and its offshoot, Head Machine; he also played on the first Toe Fat album. Shortly thereafter, Skorsky quit NHB.

To harmonize the musical slants of each member — blues (Ford), folk (Paull), soul (Schelhaas), and rock (Kerslake) — NHB teamed with producer/engineer Eddie Offord, fresh off his work on The Yes Album and Tarkus. 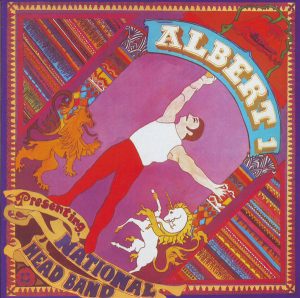 The National Head Band released Albert 1 in October 1971 on Warner (UK). Schelhaas composed “Lead Me Back” and the two songs that bookend side two: “Ilsington Farm” and the eight-minute “Mister Jesus.” He co-wrote numbers with Kerslake (“Too Much Country Water”) and Paull (“Brand New World”). Ford wrote “Try to Reach You” and the two songs that frame side one: “Got No Time” and the near-seven-minute “Listen to the Music.” Paul contributed “You.” 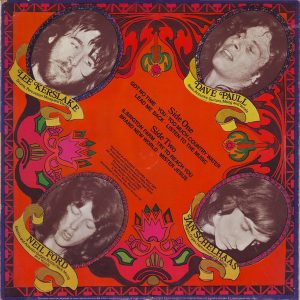 The album cover, designed by graphic artist Ginny Gillam, depicts a Victorian stuntman under an arched marquee, surrounded with quilting and two statues: a unicorn and a dragon horse. The back shows oval-framed, sepia-tinged member pics, surrounded in red with nouveau floral trim. Gillam also did the cover to Goodbye Brains, the 1972 album by brass-rockers Coley.

Kerslake joined Uriah Heep in time for their 1972 fourth album Demons and Wizards and stayed through their 1978 release Fallen Angel. After a 1980/81 stint with Ozzy Osbourne, he rejoined Heep for their 1982 comeback Abominog.

Paull and Payne joined Jonesy for the 1972 album No Alternative, but left immediately afterward. In 1973, Paull (along with Kerslake) played on Proud Words On a Dusty Shelf, the debut solo album by Heep keyboardist Ken Hensley.

Schelhaas played on Grinding Stone, the debut solo album by Gary Moore. Concurrently, he played on one track (“Mama Nature Said”) on Vagabonds of the Western World, the third album by the Moore-associated Thin Lizzy. He then surfaced in Caravan for their 1976 release Blind Dog at St. Dunstans and 1977 followup Better By Far. In 1979, he joined Camel for the albums I Can See Your House From Here and Nude.

Albert 1 got its first round of CD reissues in 2008 on Esoteric Recordings (UK, Russia), Arcàngelo (Japan), and Second Harvest (US).