Nasty Pop was an English pop-rock band that released a self-titled album on Island in 1975, followed by Mistaken I.D. on Polydor in 1977. Musically, the band crossed the folksy whimsy of Stackridge and Stealers Wheel with the updated Revolver-isms of Pilot and the string-laden effervescence of Jigsaw. 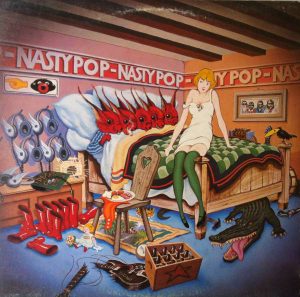 True to its cartoonish, surreal cover art, Nasty Pop is full of strange musical bedfellows, from the jaunty piano-thump of “Stage and Plays” to the misty sighs of “Airs and Graces.” The latter cut features tranquil flugelhorn sketches courtesy of once-Trifle/future-Specials wind-player Dick Cuthell. On certain tracks, the band uniquely alternate dichotomous styles and cadences between verse and chorus, such as on the perky-bluebeat-cum-anthem-chords of “The Ballad of Doodie Handstan” and the somber-ballad-turned-stately-gallop of “Country Lover.”

With its echoey, crescendo-laden intro and walloping, Leslied verses, “Crow” packs dynamics and melodrama aplenty in under three minutes. The pensive, minor-keyed “Ticking Fast” — which entwines multi-layed harmonies with extended guitar/organ interplay — suggests a Scouse-accented early Steely Dan. The album’s best track is arguably “Lonely King,” in which raw acoustics pass over to raunchy power-chords that slowly envelope into a swelling non-stop chorus.

Trading out Heath for ex-Byzantium skin-man Corduner, Nasty Pop slicked up considerably for its second helping, 1977’s Mistaken I.D. “Dip My Pocket” kicks things off with an earnest plea set to a stately piano thump, while the laid-back “Leave It Alone” does its best to recall the twangy charms of “Lonely King.” The balance of this album’s true gems, however, are found on side two. 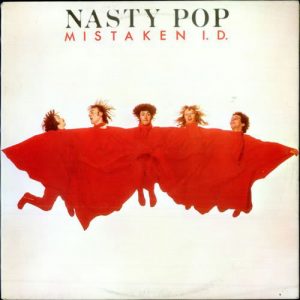 Nasty Pop weds its love for McCartney-esque acoustic/harmony hooks with Philly string embellishments on the album’s title track, which progresses from a humble, major-keyed song proper to an acute, down-modulated coda of relative length. The slow, shivering echoes of “Hold On” give vent to a confessional of painful regret. By contrast, the barnyard pleasantries of “Leavin'” fade in a wistful fog of harmonized reverb.

Even better is “Keep Her, Use Her (Love Her, Lose Her),” a statement of conflicted rationale in which light twang under-weaves thick blankets of strings that sail to a most hypnotic outro. The ultimate peak comes on “Track You Down,” in which the narrator expresses his need to reconnect with a long-lost friend and reminisces about their misspent youth. Kicking off with a melodically angular, piano-thumping set of verses, the track tom-plunges back and forth through a dizzying, open-cadence bridge that gives way to a wind-swept chorus — an addictive pattern that repeats and ultimately plays out, sans vocals, in Leslied bliss.

Nasty Pop disbanded soon thereafter, but several members linked with other players from great-yet-short-lived bands. Corduner teamed with Peter Marsh — fresh off Easy Street — for the New Wave one-off Twist, which also featured Wimshurst, who would next appear in Steve Lindsey’s post-Deaf School combo The Planets. Wilkinson, meanwhile, would serve as the third and most long-lasting bassist in Squeeze.

Art Zoyd
Art Zoyd were a French avant-garde/chamber-rock ensemble that was active from the dawn of the 1970s ...
Fuchsia
Fuchsia was an English folk-rock band from Exeter, Devon, that released a self-titled album on the P...
Horslips
Horslips was an Irish Celt-rock/folk band that released four albums on self-press Oats between 197...
Kathe Green
Kathe Green (born Sept. 22, 1944) is an American vocalist, songwriter, and actress who released t...
The Crazy World of Arthur Brown
The Crazy World of Arthur Brown was an English psych-rock band that released the single "Devil's G...