Mouse was an English hard-rock/psych band that released the album Lady Killer on Sovereign in 1973. This was the second of three one-off rock combos during a four-year period for jazz guitarist Ray Russell, who preceded Mouse with Running Man in 1972 and followed with Chopyn in 1975.

The musical partnership of Russell and Rushton started in the late 1960s when Al drummed on two CBS albums by the Ray Russell Quartet (which also included double-bassist Dave Holland). The pair then teamed with reedist Bob Downes, trumpeter Harry Beckett, and singers Alex Harvey and Alan Greed in Rock Workshop, a brass-rock big band that released two CBS albums in 1970/71. Russell, Rushton, and Greed subsequently cut an album on RCA/Neon as The Running Man.

Mouse signed to Sovereign, a short-lived progressive subsidiary of EMI that also handled Flash, Renaissance, and Public Foot the Roman. 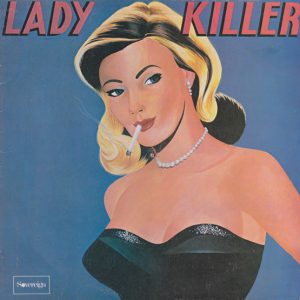 In 1973, Mouse released Lady Killer on Sovereign (UK only). It features the Rushton/Watts composition “Electric Lady” and eight group-written originals, including “Going Out Tonight,” “We Can Make It,” and “Asher Besher.” Russell conducted the London Symphony Orchestra on select parts.

The album’s one cover, “All the Fallen Teen-Angels” (originally by Medicine Head), was issued as a single (b/w “Just Came Back”). “We Can Make It” was also pulled for a 7″ (b/w “It’s Happening to Me and You”).

Artist Glenn Pierce illustrated the cover: a comic-style depiction of a smoking femme fatale from a 1940s pulp novel. The gatefold inner-spread depicts the four members as hippie/buddha/spaceship/column hybrids. One the back cover, photos of each member surround swashbuckling liner notes that tie into the pulp theme:

“Al Care sang at night and made skeleton keys by day… Russell could crack any combination of notes at five miles, and hear a key turn like a pack of dice.”

Russell next surfaced in Chopyn with keyboardist/singer Ann Odell and teenage drummer Simon Phillips. Their one album, Grand Slam, appeared on Jet in 1975. Retaining Phillips, Russell issued the jazz-rock solo album Ready or Not on DJM in 1977. During the 1980s, he issued numerous stage and screen recordings on the library labels Bruton and JW Music.

Watts played on the 1976 self-titled fifth album by pop-rockers Design.

Lady Killer got its first reissue in 2005 on Angel Air Records (UK) and Air Mail Archive (Japan), both with four bonus tracks: “Lost In the City,” “Timothy Leary’s Ride Home,” “Jamie,” and “Hit & Run,” all composed by Russell.

Chico Magnetic Band
The Chico Magnetic Band was a French psych-rock band from Lyon that released a self-titled album on ...
Ann Odell
Ann Odell is an English keyboardist, vocalist, songwriter, and arranger who played on albums by Sh...
Keith Tippett
Keith Tippett (Aug. 25, 1947 — June 14, 2020) was an English free-jazz pianist and bandleader who w...
The Beautiful South
The Beautiful South were an English sophisti-pop band from Kingston upon Hull that debuted with th...
Brinsley Schwarz
Brinsley Schwarz was an English rustic-rock band that released six albums on UA/Liberty between 1970...