Mirthrandir were an American symphonic-rock band from New Jersey that issued the album For You the Old Women on self-press Mirth Music Inc. in 1976.

Mirthrandir formed in New Jersey in 1973 when most of the members were in their late-teens and early twenties. Their name is Sindarin (Tolkien language) for “grey pilgrim.”

They attempted to create a large-band sound with basic rock instrumentation. To approximate brass and woodwinds, they used the then-antiquated Farfisa organ. They rented out theaters to showcase their music and also played local clubs alongside fellow NJ maximalists Fireballet. 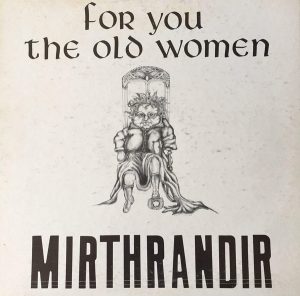 Mirthrandir recorded their singular album, For You the Old Women, in late 1975 during a one-take performance at Vantone Studios, W. Orange, NJ. The album was released on February 2, 1976, on one-press Mirth Music. It features five epic songs, including “Conversation with Personality Giver,” the 8:10 title-track, and the 14:53 suite “For Four,” which lifts a middle-riff from “The Knife” by Genesis. The original vinyl was housed in a b&w cover with hand-drawn artwork.

For You the Old Women was reissued in 1992 on Greg Walker’s Syn-phonic label with revised cover art. In the liner notes, the band likened their sound to the Cony Island Cyclone.