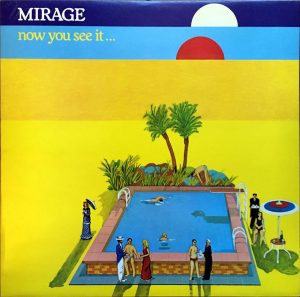 Now You See It… features three songs per side: four composed by Khan (“King’s Heads,” “Always Leaving,” “Elephants’ Tales,” “Ballade”) and two written by Godding (“Time Less Words” and “Underneath The Arches And Beyond”).

“Underneath the Arches and Beyond“

The album was produced by Mike Dunne, whose other technical credits from the period include albums by Hugh Hopper, National Health, Sundance, Darryl Way’s Wolf, Flash, Badger, Yes (Close to the Edge), Jon Anderson (Olias of Sunhillow), and Mott The Hoople.

Mirage backed Annette Peacock on her 1978 release X-Dreams, after which the members drifted to separate shores.

Cook joined Soft Machine for their 1978 release Alive And Well Recorded In Paris and subsequently played on albums by Joji Hirota and Mike Westbrook.

Sheen rounded out 1978 with credits on albums by Soft Head, Iona, and two releases by jazz-rockers Paz. During the early 1980s, he did a three-album stint in Kevin Coyne’s backing band.

Godding’s later credits include backing work for Coyne, Westbrook, and Meic Stevens. In 1988, recordings by three of Godding’s unsigned ’80s-era projects were compiled on the Reckless Records release Slaughter on Shaftesbury Avenue.

Airborne
Airborne were a Canadian folk-rock band from Vancouver that released the album Songs for a City on...
Mustang
Mustang were a Belgian hard-rock band that was active for more than a decade, starting in 1966 as ...
Experiments With Ice
Experiments With Ice were an English coldwave band that released a self-titled album on United Dai...
Sonny Sharrock
Sonny Sharrock (Aug. 27, 1940 — May 25, 1994) was an American avant-jazz guitarist from Ossining, ...
Cockney Rebel
Cockney Rebel was an English orchestral/art-pop band that released two albums on EMI in 1973 and 1...
Silk
Silk were an American soul trio that released two albums on Prelude Records in 1977. (Not to be co...
Sam Rivers
Sam Rivers (Sept. 25, 1923 — Dec. 26, 2011) was an American avant-jazz multi-reedist and pianist ...
Amalgam
Amalgam were an English free-jazz ensemble that released 10 albums on seven different labels betw...
Machiavel
Machiavel are a Belgian rock band, initially active from 1974 to 1982. After their 1976 self-titled ...
Titus Oates
Titus Oates were an American psych-rock band from Dallas that released the album Jungle Lady on se...
Mirror
Mirror were a Dutch symphonic-rock quintet that self-pressed the album Daybreak in 1978. Three-fif...
Altona
Altona was a German jazz-rock/funk band from Hamburg that released two albums on RCA Victor in 197...