Mezquita were a Spanish symphonic-rock band from Córdoba that released two albums on Chapa between 1979 and 1981.

Mezquita evolved from the hard-rock band Expresión, which recorded two album’s worth of material between 1972 and 1977 and released one single, “Marrakech” (b/w “La luz del fin del Mundo”), on Musimar in 1974. 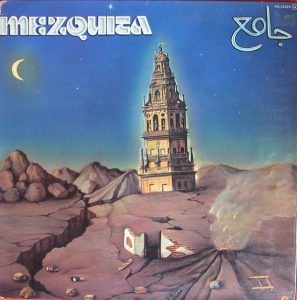 In 1981, Mezquita released their second album Califas del Rock. It features eight originals, including the lengthy side-closers “La Última Juerga” and “La Montaña, la Ciudad.” The album was recorded at Estudios Escorpio and mixed by Tino Azores. The tracks “Resaca del Amanecer” and “Así Soy Yo” were paired on a 7″ single.

Mezquita ran aground in the mid-1980s but reformed in the late 2000s. Randy Lopez (aka Fernando López Rojas) spent some of the intervening years in the bands Medina Azahara and ONZA.