Metro was an English symphonic/art-pop combo that was active through two iterations between 1976 and 1980. In its initial trio formation with veteran singer/songwriter Duncan Browne, the band released a classic self-titled album in late 1976. After his departure, two further albums appeared circa 1979/80 from a revised five-piece lineup.

Browne (b. 1947) was a nine-year musical veteran, having first recorded in the folk-psych trio Lorel. In 1968, he released the album Give Me Take You on Immediate Records. After his 1970 one-off single (“Resurrection Joe”) on Bell Records, he resurfaced in 1973 with a self-titled album on RAK. During 1974/75, he played on albums by Colin Blunstone, Stacy Dorning, and Mike Heron’s Reputation. 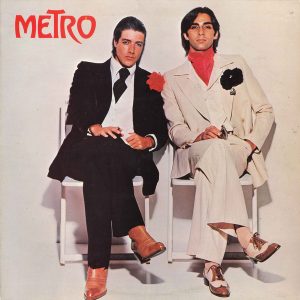 Metro released their self-titled album in late 1976 on Transatlantic (UK, Europe, Canada, New Zealand). Each side intersperses slow, swelling numbers (“Criminal World,” “Overture/Flame,” “One-Way Night”) with blazing uptempo tracks (“Precious,” “Mono Messiah,” “Jade”). Godwin and Browne co-wrote half the songs as a duo and collaborated with Lyons on some of the more complex pieces.

Musically, Metro is one of the earliest albums to carry the torch of 1973–75 Roxy Music. The rising “Criminal World,” with its faint, wah-wah intro; coy, whispered verses; and rising, Leslied second half — climaxing with a pensive, chromatic arch (B♭..C#..C..B..) — recalls Stranded-era cuts like “Amazona.”

“Precious” struts with instant vocals on a descending four-note piano/bass figure. Browne lures his subject, a crestfallen diva, to the raptures of fate with lines like “you will not be naked when you shed your entourage.” The chorus is instrumental, spearheaded by a lyrical guitar figure that modulates with rising intensity amid a terse, persistent piano figure. This very pattern multi-tracks with shifting key centers to a grand fadeout.

“Overture to Flame” fades in with echoey, chugging chords; doubled with funkier chordal licks that — combined with bubbling bass and a sliding hi-hat — create a stormy sea effect. “Flame” itself is a slow, quiet ballad comprised of whispering vocals, soft piano, misty tambourine, and Spanish guitar filigree. As the song advances, multi-tracked voices lend a 10cc-like fullness. Things speed up in the final seconds with soaring vocals over a swishing fadeout.

“Mono Messiah” cuts in with staccato guitar/organ interplay, anchored by a sliding hi-hat. A silvery, Manzanera-like lead tone reverberates amid the full, swaying verses and exploding chorus, built with layers of keyboards and echo over sustained chords and cymbals.

“Paris” and “Jade” are two additional uptempo numbers on side two, bisected by the slow, quiet ballad “One-Way Night.”

Metro was co-produced by the group and Peter Sames, who also produced the long-vaulted second album by Fantasy (Beyond the Beyond). The engineer, Dave Grinsted, had an illustrious string of post-psych credits on Decca/Deram, including 1969–72 albums by Ashkan, Caravan, Galliard, ‘Igginbottom, Khan, Trapeze, Whistler, and Zakarrias. Near the time of Metro, he engineered albums by Gonzalez, Cado Belle, and Clifford T. Ward.

Godwin and Browne sport chic European formal attire on the front and back cover, photographed by one Sanders (Randy Pie), who also took the b&w inner-sleeve photos, including a seated shot of Lyons.

Transatlantic issued a 7″ of “Criminal World” (b/w “Precious”). The a-side — banned by the BBC for sexual content — was used in a 1977 Italian documentary on the London punk movement. In 1983, David Bowie covered the song on Let’s Dance, his biggest selling album.

In early 1977, while doing interviews on the back of Metro, Godwin and Browne expressed interest in the burgeoning punk scene and Bowie’s latest album, Low. 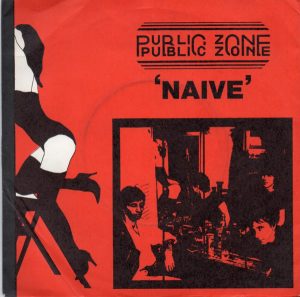 Eager to try something in this newfangled raw/stripped vein, Metro masqueraded as Public Zone for the single “Naive,” a riff-based rock song with brisk down strokes and brash rhythmic elements; tempered by Browne’s tender vocal delivery.

The b-side, “Innocence,” is a straight guitar-pop song with a simple 1-6-4-5 progression and a harmonized bridge and chorus. Ex-Curved Air drummer Stewart Copeland plays on both songs. He passed on an invitation to join the group because he was already busy trying to launch his own new band, The Police.

“Naive” appeared on Transatlantic-subsidiary Logo in a red and black sleeve with a xerox photo of the now short-haired group. The single was produced by Hugh Murphy (Gerry Rafferty, Jack the Lad, Kursaal Flyers, Kilburn & the High Roads).

In 1978, Browne left Metro and resumed his solo career with the Logo/Sire release The Wild Places, recorded with keyboardist Tony Hymas and the rhythm section on Metro, Giblin and Phillips. Musically, it continues the sound of Metro with forays into punk (“Samurai”) and jazz-rock/fusion (“Camino Real (Pts. I, II, III)”). The final track on the album, “Planet Earth,” is credited to Godwin.

“The Wild Places” charted in the Netherlands, where Browne performed the song on TopPop. He followed the album with the similar 1979 release Streets of Fire. Hymas and Phillips then formed the pop trio PhD with singer Jim Diamond.