Mellow Candle was an Irish folk-rock band, first formed in 1963 as a girl trio. After a one-off single in 1968, they reconfigured as a five piece. Their singular album, Swaddling Songs, appeared in 1972 on Deram. In the late ’90s, the album’s popularity spread globally across the internet, prompting a release of 1969–71-era material on the archivist labels Si-Wan and Kissing Spell.

In 1971, Mellow Candle resumed as a full band with Simonds, O’Donnell, Williams, bassist Frank Boylan, and Scottish drummer William Murray. They relocated to London, where they were managed by Ted Carroll, whose other clients included fellow Irish rock acts Skid Row and Thin Lizzy.

That April, they signed to the Deram division of Decca. The quintet’s first release was a 10″ test press of five songs from their upcoming album, plus two rarities: “Lord of the Green Grass” and “Waterman Weatherman.” Meanwhile, Murray played on the November 1971 Harvest release Whatevershebringswesing, the third solo album by ex-Soft Machine frontman Kevin Ayers. 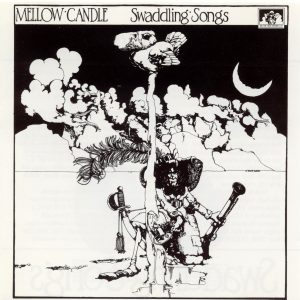 Mellow Candle released Swaddling Songs in April 1972 on Decca. Simonds wrote seven of the 12 songs, including “The Poet and the Witch,” “Boulders on My Grave,” “Reverend Sisters,” “Lonely Man,” and “Break Your Token.” O’Donnell contributed two numbers (“Heaven Heath,” “Messenger Birds“) and co-wrote “Sheep Season” with her husband — credited here as David Williams — and Simonds. Williams wrote “Buy or Beware” and co-wrote “Vile Excesses” with Murray.

Artist David Anstey did the b&w cover illustration. It shows a brim-hatted male hippie, armed with horns and a sword, stationed at night in an arctic setting beside a dodo-topped pole. Anstey also did cover art for Aardvark, Black Cat Bones, Chicken Shack (Imagination Lady), Galliard (Strange Pleasure), Hunter Muskett (Every Time You Move), Khan, Walrus, the World of Oz.

Deram issued “Dan the Wing” as a single, backed with “Silversong.”

Mellow Candle continued into 1973 with bassist Steve Borrill (ex-Spirogyra) in lieu of Boylan, who jumped ship to the Gary Moore band for the Irish guitarist’s debut album Grinding Stone.

Simonds played Harpsichord and Mellotron on Shades of a Blue Orphanage, the 1972 second album by Thin Lizzy. In 1974, she sang alongside Sally Oldfield on Hergest Ridge, the second album by Mike Oldfield. The following year, the two singers (along with Bridget St. John) performed on Oldfield’s third long-player, Ommadawn, which also features Murray on percussion. Simonds also partook in the girl’s choir on the 1976 Jade Warrior release Kites, which credits her as Clodagh Simmon.

Murray drummed on the 1974/75 Amazing Blondel albums Mulgrave Street and Inspiration. He interacted again with Simonds as the snare and bass drum player on “Songs of the Forest,” the opening track on Kites. During the early 1980s, both lived in New York City, where they performed in a new wave band with musicians Carter Burwell (Thick Pigeon) and Stephen Bray (Breakfast Club).

Simonds appears on Mike Oldfield’s 1990 release Amarok, which features cover photography and liner notes by Murray, by then a fashion photographer.

O’Donnell and Williams move to South Africa, where they formed the folk quartet Flibbertigibbet, which made the 1978 album Whistling Jigs to the Moon.

All About Eve covered “Silversong” as a b-side to “Farewell Mr. Sorrow,” a track from their 1991 third album Touched By Jesus.

In 2007, Simonds surfaced in the ambient-chamber vocal group Fovea Hex. She co-produced and played multiple instruments on their 2011 disc Here Is Where We Used to Sing.

Swaddling Songs was first reissued in 1989 on Japanese Deram as part of that region’s Edison European Rock Series, which also unearthed titles by Cirkus, Fantasy, Julian Jay Savarin, and Web. In 2004, UK archivists Acme reissued the album on CD with both sides of the 1968 single added as bonus tracks.

In 2011, specialists Rise Above Relics issued Swaddling Songs Plus…, a two-LP-plus set with the original album, a second record of demos, and two 7″ singles that account for the band’s shortplayer sides.