McDonald and Giles were an English symphonic-rock duo that released a self-titled album on Island in January 1971. The duo consisted of multi-instrumentalist Ian McDonald and drummer–percussionist Michael Giles, who commenced the project fresh off their one-album stint in King Crimson.

Michael cut an earlier album in Giles Giles and Fripp, a pop-psych trio with his younger brother Peter Giles and Crimson-mastermind Robert Fripp. Peter, who briefly joined Crimson after Michael left the band, plays bass on the album McDonald and Giles.

Ian McDonald (b. 1946) first played with Michael Giles (b. 1942) in late 1968 when McDonald joined Giles, Giles and Fripp, the psychedelic combo behind the Deram album The Cheerful Insanity of Giles, Giles and Fripp. McDonald came to the band with a background in jazz, classical, and marching band music. Peter Giles cleared out for bassist–singer Greg Lake and the band became King Crimson, a name suggested by McDonald’s friend, the non-performing lyricist Peter Sinfield.

In 1969, King Crimson signed to Atlantic and released In the Court of the Crimson King, an album comprised of five lengthy songs, including the McDonald compositions “I Talk to the Wind” (a gentle flute-laden number) and “The Court of the Crimson King” (a Mellotron epic with two sub-sections). McDonald’s quasi-symphonic keyboard sound was a catalyst for 1970s maximalist rock.

King Crimson promoted the album with a late-1969 tour of the US, where McDonald and Giles — both homesick and weary of Fripp’s domineering grip on the band — decided to record as a duo. When Fripp and Sinfield worked on the second King Crimson album, they retained Giles and Lake (who’d left to form Emerson Lake & Palmer) as sessionists. The resulting album, In the Wake of Poseidon, appeared in May 1970. That same month, McDonald and Giles commenced work on their album at Island Studios. 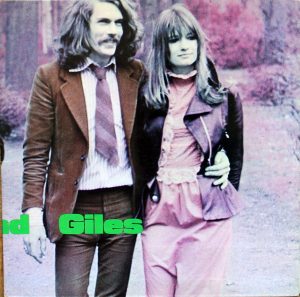 McDonald and Giles appeared on January 3, 1971, on Island Records. Side one contains two short songs (“Flight of the Ibis,” “Is She Waiting?”) surrounded by the epics “Suite In C” and “Tomorrow’s People – The Children of Today.” Side two consists of the six-part “Birdman” suite with lyrics by Sinfield and string arrangements by Mike Gray. McDonald composed all the music apart from Giles’ “Tomorrow’s People.”

“Suite in C” (11:21) starts with a slow, clean, minimal guitar figure (in G and C), soon joined by plucked acoustic chords and Giles’ choice off-beat fills. Part one (“Turnham Green”) concerns a seventeen-year-old ballerina found in a magazine. After four verses, they enter a jam section (in D minor) that speeds up with fluttering flute and hyperactive drums amid roaming bass, piano, and organ runs. Midway (at 6:01), a faint, ghostly voice heralds part two (“Here I Am”), a string-laden love overture to the girl. Two further sections follow without subtitles: a brassy, closed-cadence passage with faint vocals; and a closing boogie (in A) with rustic guitar and barroom piano.

“Flight of the Ibis” (3:18) is a medium-slow ballad with acoustic guitar, roaming drums, and thematic similarities to the Poseidon track “Cadence and Cascade,” including that song’s staccato keyboard refrain. Irish author B. P. Fallon (who conducted John and Yoko’s bed-in for peace interview) has a lyrical co-credit on this song.

“Is She Waiting?” (2:40) is a slow, rhythmless ballad with interwoven acoustic and 12-string guitars (rooted in E minor).

“Tomorrow’s People – The Children of Today” (7:00) opens with fanfare brass (in C), followed by a closed-cadence passage of drums and vocals, joined by clipped guitar and organ. The lyrics concern the ritual of torch-passing to future generations, as implied in the jubilant chorus “Tomorrow’s people are playing now, and tomorrow’s people could have the world.” A percussive jam unfolds, soon overlaid with flute and organ at increased velocity. Later (at 3:59), a somber passage of stings and horns proceeds a final go-round of the verse and chorus.

(a) “The Inventor’s Dream (O.U.A.T.)” opens with harmonized vocalise (unaccompanied), followed by a jet engine sound that fades into the distance. Harp strings and organ drones fade in amid sparkling whirling sounds. An abrupt halt signals the song proper: a jaunty 2/4 music-hall number about a Walthamstow inventor who designs wings for human flight.
(b) “The Workshop” is a medium-uptempo movement (in A) with punctual drum fills, rumbling bass, and a single verse about the creation of human wings with “Harness leathers and rainbow feathers,” followed by a sax break.
(c) “Wishbone Ascension” has a flowing organ riff (ala Procol Harum) that underscores the man’s experiment on Wishbone Hill. A choppier passage with swizzling sax and lyrics about his takeoff cuts to…
(d) “Birdman Flies!” (6:19) a slow instrumental with a four-note electric piano theme (in G minor), gradually overlaid with flute, percussion, and rising strings. Further layers (sax, guitar) swell things to a crescendo that fades to…
(e) “Wings in the Sunset” an airy sequence of heavenly harmonies and church organ. The inventor successfully completes his mission, which concludes with…
(f) “Birdman – The Reflection” (6:00) a slow, piano-driven instrumental (in Cmaj7) with melodic vocalise and swelling organ. Midway, McDonald illuminates the theme with flowing saxophone, which carries things to a grand fadeout with rising strings and roaming drums.

McDonald and Giles self-produced the album and arranged the material. The engineer, Brian Humphries, had earlier credits on albums by Man (2 Ozs of Plastic With a Hole in the Middle), Nirvana (The Story of Simon Simopath, All of Us), Pink Floyd, and Traffic (self-titled). He worked on McDonald and Giles in succession with albums by Black Sabbath, Bronco, Patto, and Spooky Tooth. This was the inaugural credit for assistant engineer Richard Digby Smith, who later worked on albums by Boxer (Below the Belt), Dana Gillespie, Free (Heartbreaker), Heads Hands & Feet, Jess Roden, and Sparks (Propaganda). 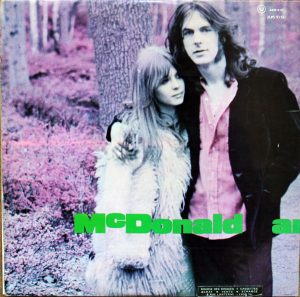 McDonald and Giles also features guest appearances by Steve Winwood and trombonist Michael Blakesley. Winwood — whose band Traffic recorded their 1970 album John Barleycorn Must Die concurrently at Island Studios — plays organ on select parts and takes the piano solo on “Turnham Green.” Blakesley, who plays on “Tomorrow’s People,” knew Giles from their time in beatsters Trendsetters Limited, which morphed into The Trend and then The Brain, a psychedelic one-off that directly proceeded Giles, Giles and Fripp.

McDonald and Giles is housed in a gatefold sleeve that shows a saturated landscape shot of Giles and his wife Mary Land (front fold) and McDonald and his then-girlfriend Charlotte Bates (back fold). Charlotte painted the inner-gate landscape: a depiction of orange valley hills against a pink sky. The front cover photographer, Richard DiLello, later earned visual credits on albums by Badfinger, Barbara Acklin, Charlie (No Second Chance), Flight, The Raspberries, and The Reflections.

Ian McDonald plays an auxiliary role on the 1974 King Crimson album Red, which features his alto sax work on “One More Red Nightmare” and “Starless.” He almost rejoined the band, but Fripp disbanded Crimson soon after that album’s release.

In 1976, McDonald co-founded Foreigner, a transatlantic hard-rock band that achieved Platinum status with their 1977 debut album, which features the McDonald co-write “Long, Long Way from Home” and the hits “Cold As Ice” and “Feels Like the First Time.” McDonald co-wrote two songs (“Love Has Taken Its Toll” and the instrumental “Tramontane”) on their second album Double Vision, which scored further hits with “Hot Blooded” and the title-track. He left Foreigner after their 1979 third album Head Games, which contains the McDonald co-write “Do What You Like” and the radio hit “Dirty White Boy.”