May Blitz was an English–Canadian hard-rock trio that released two albums on Vertigo during 1970 and 1971. They were initially a spinoff of Bakerloo. Drummer Tony Newman came from the Jeff Beck Group and later joined Three Man Army and Boxer.

May Blitz formed in late 1969 when the rhythm section of Bakerloo, bassist Terry Poole and drummer Keith Baker, teamed with Canadian singer and guitarist Jamie Black. Bakerloo disbanded after one album when their guitarist, Clem Clempson, replaced James Litherland in Colosseum (after Litherland formed Mogul Thrash). The new trio named itself after a series of German air attacks on England during the first week of May 1941.

Before May Blitz landed a deal, Poole and Baker both left the band. (Baker briefly joined Uriah Heep for their 1971 album Salisbury.) Black kick-started May Blitz with bassist Reid Hudson, a fellow Canadian; and drummer Tony Newman, a Southampton native who played on the 1969 albums Beck-Ola by the Jeff Beck Group and Is This What You Want? by Jackie Lomax.

May Blitz hit the London clubs and signed with Vertigo, the progressive division of Philips/Phonogram. 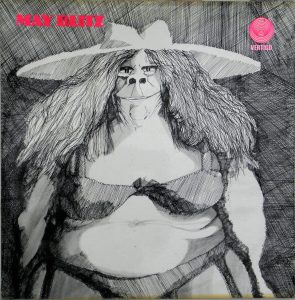 May Blitz released their self-titled debut album in 1970 on the Vertigo “swirl” label. It features seven group-written originals, starting with the eight-minute “Smoking the Day Away.” The remainder consists of three epics in the six-minute range (“Dreaming,” “Squeet,” “Virgin Waters”) and three cuts in the four-minute range (“I Don’t Know?,” “Tomorrow May Come,” “Fire Queen”).

May Blitz self-produced the album with engineer Barry Ainsworth, who also worked on 1969–71 albums by Deep Purple, Flaming Youth, Hawkwind, and Beggars Opera.

Original Vertigo copies are housed in a gatefold sleeve designed by cartoonist and illustrator Tony Benyon. It consists of three pencil sketches: a lady/pig hybrid shown from the waist-up in a bikini and sun hat (front); a giant anthropomorphic gorilla reclined amid empty towers (back); and the same lady/pig hybrid at the head of a mountain with the words MAY BLITZ at the foot (inner-spread). Benyon also drew the cover to the debut album by Vertigo labelmates Patto.

The inner-spread contains liner notes by four proprietors on the UK club circuit, including Phil Myatt of the Mother’s Club in Birmingham, who wrote “With the high standard of professional musicianship these days it’s seldom that a group makes me forget the time and place anymore. May Blitz did that!”

Vertigo issued May Blitz in the UK, Europe, Australia, and South Africa. In North America, the album was issued on Paramount Records, which paired the tracks “Fire Queen” and “Virgin Waters” on a white-label promo single. 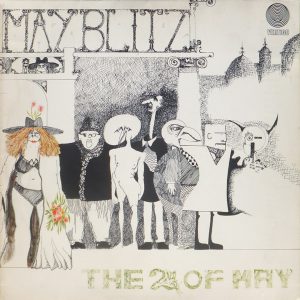 May Blitz unleashed eight new originals on The 2nd of May, released in 1971 on Vertigo. The album contains four group-written numbers (“For Mad Men Only,” “Snakes and Ladders,” “8 Mad Grim Nits,” “High Beech”), plus three with lyrics by one Stuart Clark (“The 25th of December 1969,” “In Part,” “Honey Coloured Time”). Black lone-wrote the closing track, “Just Thinking.”

The engineer on 2nd of May, Dave Harris, later worked on albums by Sailor, Mallard, Steeleye Span, Colosseum II (Electric Savage), and the debut solo album by Peter Gabriel.

Benyon sketched the album’s gatefold in a similar style to the debut. It shows a mixed group of b&w figures — anthropomorphic birds; cubist figurative subjects; men of various shape (portly, long-necked) — lined up in front of a temple. The lady/pig from before stands in a scarf and brown hair. The lineup extends to the back cover, where a colorful mix of Edwardian revelers stand amid green trimmings. The inner-spread shows a yellow-tinted group photo and credits.

May Blitz disbanded in late 1971. Black and Hudson both returned to Canada and disappeared from the music scene.

May Blitz and The 2nd of May were first issued on CD in 1990 by German archivists Linam Records, which also excavated titles by Ashton, Gardner and Dyke, Nucleus, Beggars Opera (Waters of Change, Pathfinder), Gentle Giant (Three Friends), Buddy Miles, and the Left Banke. Both albums have also gotten CD pressings on Repertoire (Germany) and Vertigo (Japan). Since 2001, Italian specialists Arkama have reissued the May Blitz titles multiple times on CD and LP.

Jet
Jet were an English art-rock/pop band that released a self-titled album on CBS in 1975. The band w...
Pierre Moerlen's Gong
Pierre Moerlen's Gong was a French jazz-rock band that functioned as a continuation of Gong follow...
Sly & The Family Stone
Sly & The Family Stone were an American soul-funk band from San Francisco, Calif., that relea...
Tysondog
Tysondog were an English hard-rock/metal band from Newcastle upon Tyne that debuted with the singl...
Patrick D. Martin
Patrick D. Martin is an English coldwave/proto-zolo musician who released three singles on Deram a...