Matching Mole was an English jazz-rock band that released two albums on CBS in 1972. The band was formed by drummer/vocalist Robert Wyatt after his departure from Soft Machine and featured fellow name-players of the Canterbury music scene.

Matching Mole was formed by Robert Wyatt in October 1971 following his departure from Soft Machine after five years and four albums. He’d also begun a solo career with the 1970 free-form album The End of an Ear. The name Matching Mole was based on the phonetic translation of the words “Soft Machine” in French: Machine Molle.

The members of Matching Mole were mostly pre-established on the jazz-rock scene. New Zealand-born keyboardist Dave MacRae (b. 1940) had been active since the late 1950s when he played on an album by the Bob Paris Combo. More recently, MacRae played on albums by the Graeme Lyall Quintet and jazz vocalist Annie Ross.

Organist Dave Sinclair (b. 1947) was part of Caravan for their first three albums and also played on Wyatt’s solo album. Guitarist Phil Miller (b. 1949) hailed from Delivery, which issued the album Fools Meeting in 1970. Bassist Bill MacCormick (b. 1951) was the relative newcomer, stemming from Phil Manzanera‘s then-unrecorded Quiet Sun. 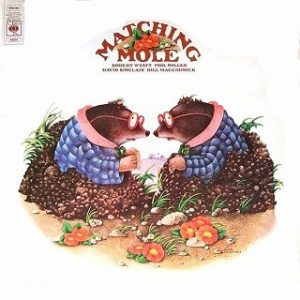 Matching Mole released their self-titled debut album in April 1972. It features eight originals, seven composed by Wyatt, including “Instant Kitten,” “Dedicated to Hugh,” and “Immediate Curtain.” Miller contributed the side-one closer “Part of the Dance.” The album was co-produced and engineered at London’s Nova Studios by Soft’s manager Sean Murphy.

Sinclair left Matching Mole before recordings commenced on a followup that summer. 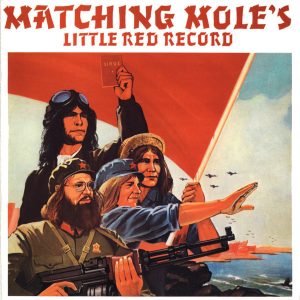 The band’s second album, Matching Mole’s Little Red Record, appeared in October 1972. It features nine tracks, including “Marchides,” “Flora Fidgit,” and “Smoke Signal.” The tracks “Nan True’s Hole,” “Righteous Rumba,” and “Brandy as in Benge” run together as a 10:50 suite. Writing credits are spit between the four members. Guests include the Der Mütter Korus and Brian Eno, who played VCS 3 synthesizer on the track “Gloria Gloom.” The album was produced by Robert Fripp.

The cover of Little Red Record was designed by Bob Norrington (Danta, Trapeze, Sweet, Roy Wood) in the style of Chinese poster art from the Cultural Revolution. This played along with the inspiration behind the album’s title, Mao Zedong’s Little Red Book.

Matching Mole disbanded in late 1972 after a Continental tour with Soft Machine. The following year, talks of a Matching Mole reboot — set to include Wyatt, MacCormick, keyboardist Francis Monkman (Curved Air), and saxophonist Gary Windo (Centipede) — were rendered moot by Wyatt’s paralyzing fall from a fourth-story window. He reemerged in 1974 with the album Rock Bottom, his first of many solo works in an art-pop/vocal vein.

Dave Sinclair rejoined Caravan in time for their 1973 release For Girls Who Grow Plump in the Night and remained with the band till their initial breakup in the early ’80s.

MacCormick played on Eno’s 1973 debut solo release Here Come the Warm Jets. In 1975, he partook in a Quiet Sun reunion that generated the album Mainstream. Also that year, he played on albums by colleagues Phil Manzanera (Diamond Head) and Robert Wyatt (Ruth Is Stranger Than Richard). The bassist then joined Manzanera’s 801 and played on the 1977/78 Eno albums Before and After Science and Music for Films. In 1979, he surfaced in the post-punk band Random Hold.

Jon Anderson
Jon Anderson (born Oct. 25, 1944) is an English singer, songwriter, and multi-instrumentalist from...
Ben and the Platano Group
Ben and the Platano Group were a French Latin-funk ensemble that released the album Paris Soul on ...
Chico Magnetic Band
The Chico Magnetic Band was a French psych-rock band from Lyon that released a self-titled album on ...
Chateaux
Chateaux were an English metal band from Cheltenham, Gloucestershire, that released a standalone s...
Valerie Simpson
Valerie Simpson (born Aug. 26, 1946) is an American soul singer from New York who rose to promine...