Chapter Three was formed in 1969 by Mann and longtime musical partner Mike Hugg, who co-founded Manfred Mann in 1962.

On October 24, 1969, Chapter Three made its live debut at the Mayfair Ballroom in Newcastle. The lineup that evening was Mann, Hugg, bassist Steve York, drummer Craig Collinge, and saxophonist Bernie Living, plus a five-piece wind/brass section.

York hailed from East of Eden and played on their debut album Mercator Projected, released earlier that year.

Collinge, a native Australian, spent the prior two years in Procession, a beat-psych band from Melbourne that moved to London in early 1969 to record its second album, produced by Hugg. 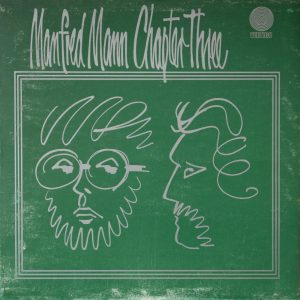 Chapter Three issued its self-titled debut album in November 1969 on Vertigo. It starts with a re-recording of the Mann/Hugg co-write “Travelling Lady” (originally a Manfred Mann b-side) and features 11 numbers in all. Mann wrote “Konekuf,” “A Study in Inaccuracy” and co-wrote “One-Way Glass” with outsider Peter Thomas, a recurrent collaborator since 1966. Hugg composed six tracks, including “Time,” “Sometimes,” and “Snakeskin Garter.”

Side B includes a five-minute rendition of “Mr. You’re a Better Man Than I,” written in 1965 by Hugg and his brother Brian. It was first recorded by the Yardbirds and covered by American garage-rockers Terry Knight & the Pack and New Colony Six. On the Chapter Three version, Mann gets a co-credit.

The album was recorded at Maximum Sound Studios between June and October 1969. It was co-produced by Mann, Hugg, and engineer Dave Hadfield. Original copies come in a dark green gatefold with hand-drawn doodles of the members. The original release (cat# VO 3) was the third in Vertigo’s swirl series.

Outside the UK, Manfred Mann Chapter Three was issued on Vertigo (Spain), Polydor (US, Canada), Fontana (Australia, Italy), and Philips (Japan). In Argentina, the album appeared as Dama Viajera with a new cover that shows a woman in hot pants and go go boots at the top of a stairway. 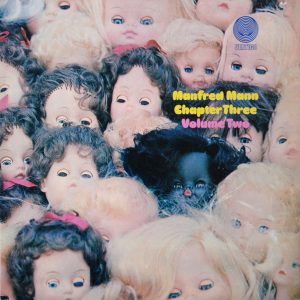 Chapter Three’s second album, Volume Two, appeared in October 1970. Side A contains four Hugg originals (incl. “Lady Ace” and “Poor Sad Sue”) and “It’s Good to Be Alive,” co-written by Mann and Brian Hugg, now listed as a full member. Side B features the 16-minute Hugg epic “Happy Being Me” and Mann’s “Virginia.” The track “Jump Before You Think” originated as “At the Party,” a piece from the Venus in Furs project.

Volume Two was produced by Mann, Hugg, and Hadfield with brass arrangements by Wadsworth and Mike Gibbs.

Photographer/designer Keef (aka Keith MacMillan) did the visuals. The gatefold shows a cluster of doll heads: blondes at both ends, brunettes at the core (all white) and one black doll below the name and title. The inner-spread shows the heads dispersed along cracks in the Earth with an unclothed child at the center. Keef also did cover visuals on Vertigo titles by Hannibal, Warhorse, Beggar’s Opera, Hungry Wolf, Affinity (Affinity), and Colosseum (Valentyne Suite).

“Virginia” got lifted as a single (b/w “I Ain’t Laughing”). “Happy Being Me” got paired on a Vertigo jukebox single with “Paranoid” by Black Sabbath.

In 1971, Manfred Mann formed the Earth Band, which issued two Philips albums in 1972 and nine albums on Bronze between 1973 and 1983. They charted with the albums Solar Fire, The Roaring Silence, Angel Station, and the singles “Joybringer,” “Blinded By the Light,” “Spirit In the Night,” “For You,” and “Runner.”

Hugg signed to Polydor and issued the 1972/73 solo albums Somewhere and Stress & Strain. He then formed Hug for the 1975 funk-rock album Neon Dream. A pair of singles by Mike Hugg’s Freeway followed in 1976.

York joined soul-rockers Vinegar Joe for a 1972/73 album trifecta. He then played on solo albums by its two ex-singers, Robert Palmer and Elkie Brooks. In 1973, he headed Steve York’s Camelo Pardalis on the Virgin release Manor Live, a blues-rock album with appearances by Graham Bond and the team of Mike Patto and Ollie Halsall (Timebox, Patto, Boxer). At the turn of the 1980s, York backed Marianne Faithful on her comeback albums Broken English and Dangerous Acquaintances.

In 2019, UK archivists East Central One issued the three-disc Radio Days Vol 3 (Live Sessions and Studio Rarities). It features Chapter Three outtakes, alternate recordings, and portions of their soundtrack to Venus in Furs.